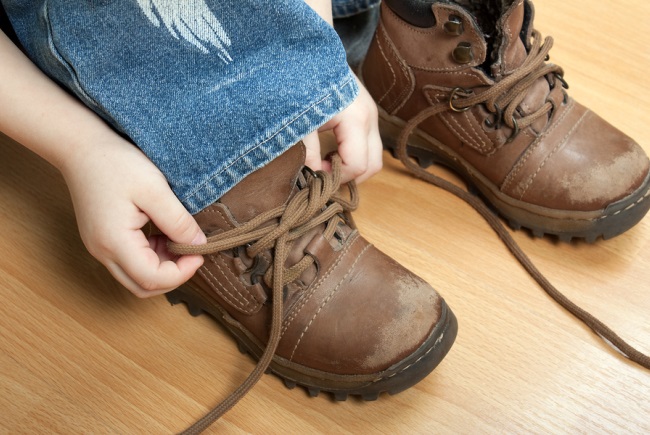 It seems that I may as well have asked my kid to fly to Mars. You see, I tried to get him to practice tying his shoes again yesterday.

The tears! The flailing of limbs! The air-raid siren wailing of “I CAN’T DO IIIIIIIT!!!!” Oh, the humanity!

45 minutes of full-fledged temper tantrum later, he finally huffed and conceded to go to the front door to get a shoe to practice on. Yes, you read correctly; we hit critical mass before he even picked up the shoe.

I don’t think anything I’ve encountered in my entire life has baffled me quite as much as parenting. Kid logic defies whatever laws of physics I’m working with. Or maybe it’s an intrinsic attitude thing, in which case I’m amazed I survived to adulthood. The first thing I always said when told no was “WHY NOT?” and then, when I understood the extent of the problem, it was always “how do I get around this?”

My mother is a saint.

I kind of resent all those little voices in society that tell kids how individual and special they are, and how everyone does things their own way. Because while patiently attempting to demonstrate the benefits of holding the laces in a certain, specific way for the 400th time, I now have a 5 year old telling me in no uncertain terms that he thinks I’m being a conformist who’s harshing his mellow while he’s trying to be unique.

While I try to explain to him that holding the loop on the right lace with his left hand prevents him from being able to pick up the left lace, he does this annoying flappy rag-doll impression. The shoe gets tossed to the side with a grunt-sigh that I didn’t think I’d have to hear for another decade. “I just can’t do anything right,” he tells me.

I try very hard not to roll my eyes. I’ve been tying my shoes for 30ish years. What do I know about it anyway?

“No! It’s impossible!” he pouts, and then suddenly he reverts from age 15 to age 2. He flings himself on the floor with enough drama to be Oscar-worthy and begin kicking his feet, wailing like a dying moose.

I hate that sound.

Remember when they were very small, and when they cried, it was kind of cute? I don’t know what happened; it’s like he hit some toddler-version of puberty. Around 3, his voice changed, and ever since then, he’s been a fog horn.

“No movie tonight,” I tell him. “Little boys who cry and can’t learn to practice tying their shoes are too little to watch Lord of the Rings with daddy.” I pick him up (this is getting a lot harder since he hit 40 pounds) and carry him to bed, depositing him there for a nap.

Exactly three minutes later, he creeps downstairs again to wrap his arms around my legs. “Mommy, I’m being nice to you now,” he informs me. “Can I watch the movie?”

I raise one eyebrow and give him “the look.” I’m sure I inherited this from someone.

“Pleeeeeeease, mommy.” He runs over and picks up his shoe. “Can we practice tying my shoes now?”

I nod and we sit together, shoe in lap. I show him again how mommy holds the left lace with three fingers in her left hand, leaving the index and thumb free so that she can poke it through the hole. Mommy’s thumb is big enough to wrap the lace around, but his is not; I show him how to pinch the loop with his thumb against his hand, and stick out his index finger to wrap around.

“I only needed a little help!” he says, proud of  the sloppy bow (mommy had to stuff one lace back through the knot).

The third time, as he begins to slide his fingers out, I caution him: “slowly! Try to hold onto that end, don’t let it slide out.”

And he ties his first bow on his own.

“Not so impossible, right?” I ask him.

He looks astonished. “I did it!” he says. And he shows me gleefully and reaches for a big hug.

I’m vindicated! Mommy still knows a few things. Hopefully he’ll remember this when it’s time to learn to ride his bike without training wheels this summer.

« 5 Chemicals You’re Eating That Are Worse Than Azodicarbonamide
Simple (and Cheap!) Flour Tortillas »