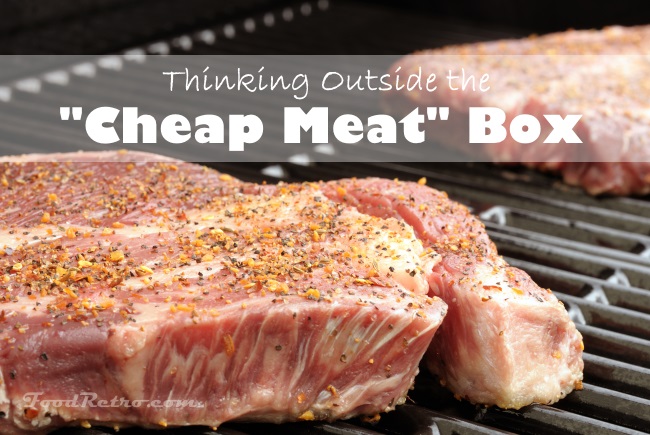 Some people argue over the value of buying more expensive organic and pastured or free-range meat. A lot of people don’t want to pay the premium. Usually the argument is that it tastes the same, pastured/free-range is a sham, and that it just flat-out costs too much. I like to ask them what they know about the meat on their plates and where it comes from.

Most people aren’t able to tell you much at all.

There are legitimate reasons that pastured, free range and organic costs more than your average meat from a big box store, and most of them have to do with where the animal comes from, how it’s raised, and what happens to it after slaughter. When you trace the path backwards from your plate through the store, the processing facilities, and back to the farm, I think many will find that they’re not so comfortable letting price determine value.

Meat is an expensive commodity product. It’s manpower and land intensive, and it requires a significant investment of time. Farmers need to make a living. They have equipment to maintain, property taxes to pay, and families of their own to feed. Animals have to be fed and cared for for months or years.

Factory farming, which is what most conventionally produced meat now consists of, can be extremely ugly. Battery cages and concentrated animal feedlots, where animals are tightly packed and frequently heavily medicated are not for the faint of heart. A CAFO can bring a cow to slaughtering weight in a single year, as opposed to 2-4 years for a pastured animal, because they’re fed a diet of corn and restricted in movement.

It’s an unfortunate truth that these are mostly considered acceptable only because people don’t know what the standard practices have become to consist of: many small farmers out of business, deforestation in South America, large quantities of antibiotics in North America, and growing methane emissions all over.

And so traditionally raised meat will never be “cheap,” and it never should be.

If we accept that meat shouldn’t be cheap, that it should be sourced from our local farmers, raised naturally, and humanely treated, then Houston, we have a problem. Few can afford a standard North American diet of steak and fried chicken every day this way.

The answer is that we’ve got to change our diets some, and I don’t think this is necessarily a bad thing. When you eat pastured beef, it’s got fewer calories; less saturated fat; more vitamin A, E and Beta Carotene;  and high levels of Omega-3. It’s more sustainable, too, as fewer human food resources and medicines are going towards the production of a pound of meat (we’re putting as much as 16 pounds of grain and about a gallon of oil into making every pound of beef, when 1/7th of the world’s population doesn’t have enough to eat).

As North Americans, we need to eat less meat and make it better quality. We should know where we’re buying it from, respect the people and animals that provide us with our meals, and be able to stand behind the ethics and methods used to produce it. When you find cheap meat some place, ask yourself what are you really voting for with your dollars? What conditions will you approve of (knowingly or not) when you make the purchase?

Then ask yourself: is it worth it?

You can still have your meat and eat it too.

Recognizing that large quantities meat should be considered an occasional luxury rather than a daily practice doesn’t mean that you’ve got to adopt a vegan lifestyle. My personal preference isn’t meatless; it’s less meat. By thinking smarter with our meal planning and making better use of the whole animal, we can improve the quality of our meals without making any sacrifices.