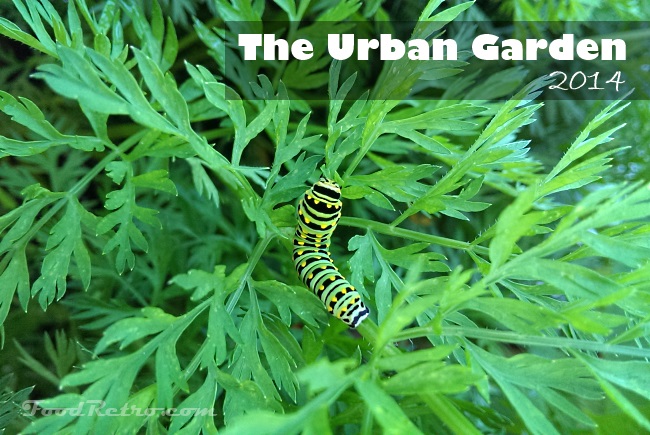 I didn’t say a lot about my garden for a while cause I had little to say, and suddenly there’s almost too much. My garden, a self-built cedar sub-irrigated planter (SIP) started a bit late due to lousy weather and a change of location. It was located on the badly-worn deck on the side of my house, which we were planning to rebuild this year right up until the first hot day, when our air conditioner went kaput.

Deck may have to wait till next year, which is fine; the SIP is nice and stable on a solid (if not totally level) concrete pad for now, still getting almost all the sun it did previously.

I finally got up a better support system for my tomatoes too: I cobbed together a cage out of some 6′ wooden stakes and some scrap 1×2″ in my garage. And yes, the pointy end of the stakes is up–I didn’t want to risk damaging my EPDM liner inside the planter, which was probably the most expensive part of it. 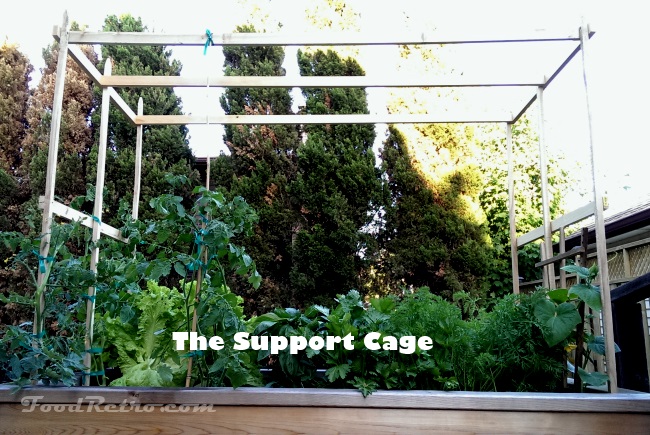 It might seem like it’s a little overkill for tomato support, but I used the same soil mix as last year: a gritty mix of 80% peat moss, 20% perlite, with some dolomite lime thrown in for pH. It is much looser than your standard bed soil. It has to be to be able to wick water upwards from the reservoir. 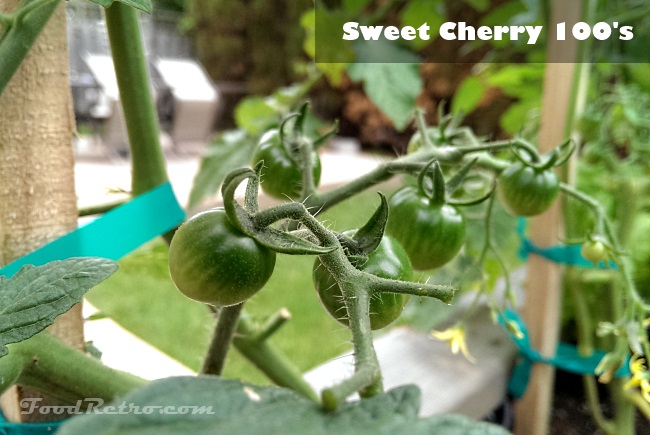 There’s another reason for the cage support: I think I actually goofed in my favour when I chose the Sweet Cherry 100’s plants last year, though a bad storm and poor support robbed me of about half my harvest. I chose them again this year with a lot more knowledge under my belt. They’re not an heirloom breed, but they are an easy-to-find indeterminate tomato plant that was extremely prolific in spite of cramped conditions.

It grows like a weed in my soil mix. And it will keep growing like a weed until frost kills it. It doesn’t reach a pre-determined size. The cage gives me horizontal staking that I can tie the tomatoes to and still have them within reach. 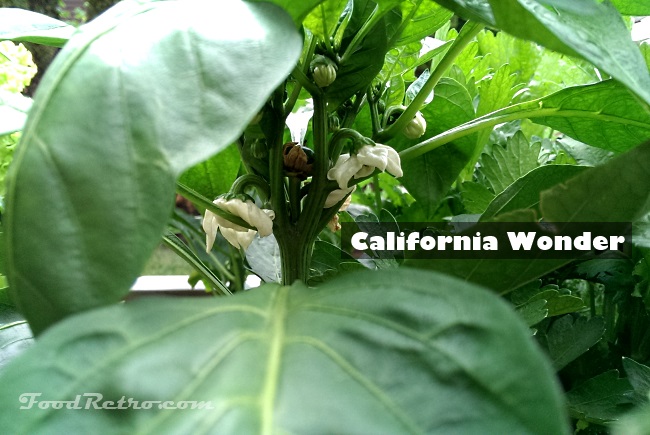 I don’t know if I’ll get any red peppers out of my California Wonder this year due to the late start, but I still like green. This variety also did pretty well in the SIP last year. Both the tomatoes and peppers I planted as seedlings with broken eggshell to hedge against blossom rot. I’m also giving them both a foliage spray of Epsom salts in water for magnesium and other traces that they aren’t getting from the sterile mix (and possibly not from the fertilizer). It certainly does no harm and they keep blooming like crazy. 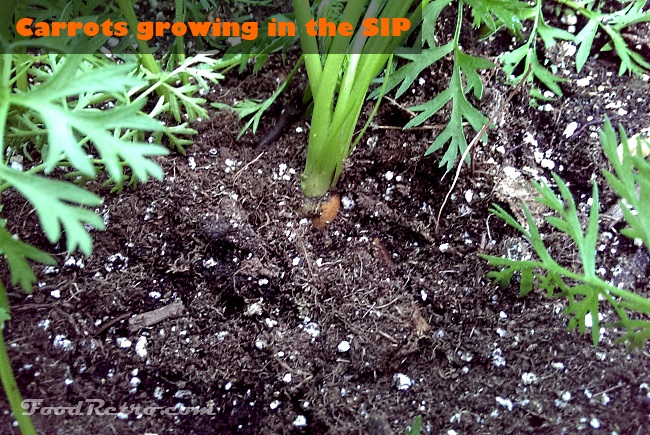 New in my planter this year: carrots. They also came in as transplants, and while I lost maybe 25% of them at first (they were pretty crowded and rootbound when I got them), the ones that survived the first few days after transplanting have gone crazy. I’ve already got a few inches of orange under the soil. I didn’t think they’d grow so fast. 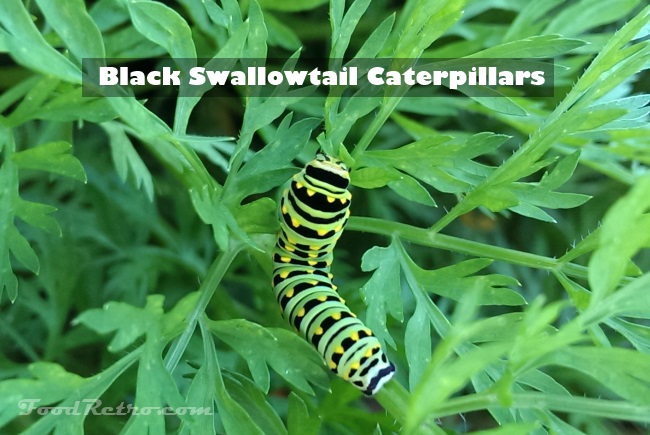 I’ve discovered something else likes carrots almost as much as my son: last year I let black swallowtail caterpillars run amok in my dill plant because my dill plant was running amok in my planter. Dill LOVES the planter, and it will grow to a 3 foot bush if you don’t keep it well-mowed. So no dill this year, but the caterpillars are now munching on my carrots. Happily, they’re one of the easier pests to deal with in a pesticide-free garden. You pick em up and relocate em somewhere else to feed, or stick them in a jar–they do become a beautiful butterfly. 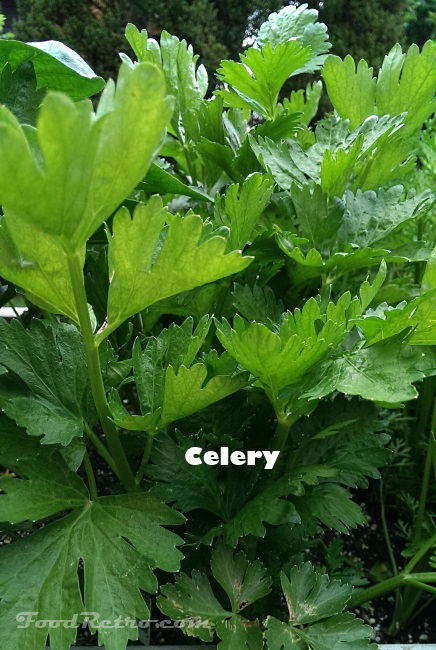 Another thing I’ve decided to try to experiment with this year to see how it does… Celery.

The celery seems to be doing extremely well so far, with no special fertilization beyond the slow-release organic fertilizer that I put in the soil at the beginning of the year. I did give it a drink of liquid fertilizer a couple days ago to top it up.

It’s already standing about a foot tall over the sides of the planter, so I count it a success in the soil.

Whether it will be the a good use of my small space, I haven’t decided yet. 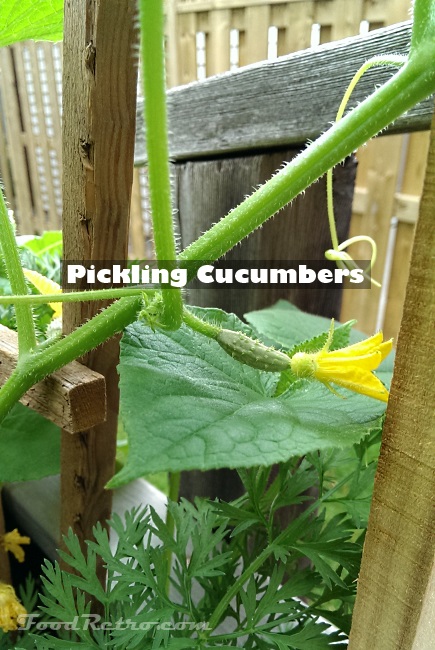 On the other end of the planter, I gave a corner to the plant that I had the most trouble with last year: cucumbers. I opted for smaller pickling ones this year, and I’m going to try to keep up on the fertilizer… I think it wasn’t getting enough last year somehow.

We’ll see; I wasn’t able to keep a potted cucumber in standard soil healthy either. They’re a fussy plant. It might be easier to just buy my cucumbers and give the space over to something else in the future.