The planter is up and running!  I will admit I dithered for a lot longer than I planned.  The big reason?  The dirt.  I must have read a hundred different websites with people far more qualified horticulturally than I.  Theoretically, I knew what I needed, and it wasn’t potting soil.

If you decide to build a sub-irrigated self-watering planter of your own, either with an Earthbox, or a Rubbermaid tote (though I strongly recommend you find a better material than those cause of the grade of plastic) or decide to go whole-hog and build a nice cedar self-watering planter like I did (you can find the plans for this here.) the important thing everyone agrees on is you should use a soil-less potting mix.

When you engage in normal container gardening, the type of mix isn’t as crucial because the water comes from the top down, so most normal potting soil will be OK.  It holds moisture well, and as long as your plant doesn’t get too waterlogged, that’s kind of the goal you’re looking for.  When you are working with a sub-irrigated planter, the water needs to move upwards from the reservoir to the roots of the plant.  High wicking action is essential to the process, and regular dirt just won’t do.

There are a few different recipes out there, but most of them are built heavy on Sphagnum Peat Moss.  It’s good for wicking, because it absorbs water like a sponge.  I almost made the mistake of trying a 45% peat 45% compost 10% perlite soil… until I got a good look at the compost.  It was extremely dense and heavy, like clay, and after I got back on the internet to do some more research, found several complaints about this mix being too heavy, mucky, and smothering to most plants (although someone said it works well with tomatoes in an Earthbox).

So I narrowed it down to two recipes that I found on the internet that were highly recommended for sub-irrigated planters.  One involved a large portion of pine bark fines, and I had to eliminate this one from my based on the difficulty obtaining and transporting them… the only place that had them was a landscaping company, loose.   The mix I ended up deciding to try is approximately 80% peat, 10-15% perlite, and 5-10% vermiculite.

Protip: try to find the expert at the garden center.  When I asked around about soil-less mix at actual nurseries and garden centers, I got a lot of blank stares.  When I mentioned the ingredients, I got sent home with the individual ingredients and the dolomite lime I needed to raise the pH of the peat.  When I went back there to get another bale of peat moss as a trade-in for some of my compost, lo and behold!  The gentleman said, “Oh, you’re looking for professional grow mix.”  Sure enough, that 3.8 cubic foot bale was exactly the mix I had decided on, plus the lime already included.  I sure wish I had spoken to him the first time around, cause I’m not sure what I’m going to do with the other half of my 22 pound bag of perlite.

Protip #2: you may need approximately 1/3 less than you think you do.   The bales of peat moss are highly compacted.  So while I calculated I needed about 110 gallons of mix, the reality was that they took up more volume than I had anticipated.  I needed only about 2 1/2 bales (3.8 cu ft./107L) of mix.

A lot of people highly recommend that you mix in some slow release fertilizer.  This is a good idea, because unlike normal soil, the soil-less mix contains little to no nutritional value for the plants.  So while you may not have to worry about killing them with too little water, your plants are going to be dependent on you for food.  For now, I added an organic balanced slow release.  I will have to look into further fertilizing needs in a hurry, because most of the sites I’ve read recommend regular fertilizing on a far more intensive schedule.

So because of the dithering and being homebound for a week with a cranky, sick toddler, I opted for a few starts of plants I was originally planning to try growing by seed (spinach and lettuce). I planted some of the seed too, for succession purposes. I’ll keep you posted!

Oh and when you fill up your planter for the first time, make yourself comfortable on the nice ledge of the cap you built.  It was somewhere on the timescale of filling up a really large wading pool with a hose. 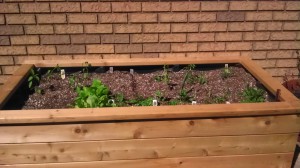 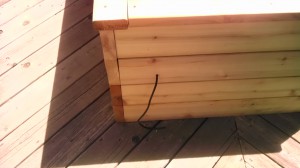 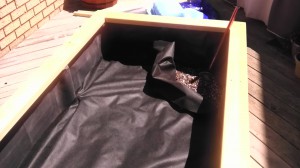 « Pesticide use
Pancakes From Scratch »