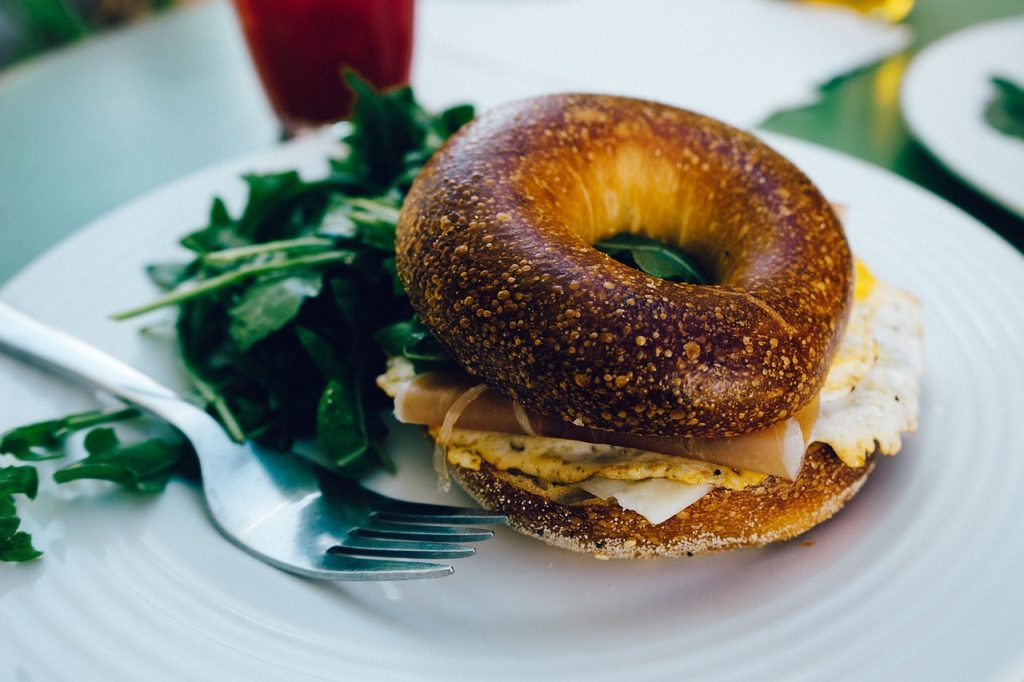 Holidays with family usually involve recounting embarrassing stories of each other. This past New Year’s Eve, one of my earliest baking attempts managed to make the “remember when….” list. Perhaps not quite as memorable as the Swedish Chef (from the Muppet Show) shooting holes into his bagels, was the story of the time I tried to make my own.

Before bagels could be purchased in every grocery or specialty store, at least in the Midwest, I fell in love with them while on a visit to a Minneapolis deli, and then again while on a trip to Miami.  Determined to re-create the chewy roll that had captured my heart and my taste buds, I poured over every cookbook I could find (the internet was not yet available) and joyfully spent every spare minute in my kitchen playing with flour, yeast, and sugar water.

I should point out that I lived in Florida at the time. This detail actually  becomes important later.

Finally after numerous failed attempts, I felt I had come up with a satisfactory bagel that toasted well, stood up to cream cheese and other toppings, and tasted good.

That fall I decided to visit my Denver family, so I packed my belongings and secret recipe and set out to surprise everyone with my new-found culinary expertise in bagel making.

When the day arrived for me to secretly create these treats while everyone else was at work, I diligently proofed the yeast, mixed wet and dry ingredients, kneaded the dough, and then set it on the counter to rise. The bagel making process seemed to be going pretty much as expected, so I proceeded on to the water bath step, subsequent shaping, second rise, and then baking. Though not quite as large as the rolls I had made at home, they did appear to at least look like a bagel in every other way, or so I thought.

Scrambling to plate the bagels as family members migrated into the kitchen, one of the bagels slid off the plate and skittered on the tile floor, landing at the feet of the three family dogs who had just wandered in.  Intrigued by the new object within their reach, the dogs dove headlong to sample this good smelling treat.  However, the bagel resisted attempts to tear apart easily, so the dogs began treating it much like a hockey puck — scooting it along on the floor to some unseen goal, tossing it up into the air, and racing with it in mouths as they charged up and down three flights of stairs. To my dismay, the once-promising bagel seemed to resist all damage being inflicted on it by the rowdy, hockey playing canines.

Remember how I said I lived in Florida? When you change altitude, you have to modify recipes. I lived at sea level; Denver is a mile high.

Everyone appeared to be enthralled with the show, watching the dogs chase and tumble over each other for at least ten minutes. As my sister proceeded to examine what she thought was a new dog toy, she happened to notice the plate of bagels behind me on the counter. She proceeded to howl with laughter as she made the connection of bagel to hockey puck. As the others caught on to what had actually happened, they, too, joined in.

While my culinary ego was certainly bruised, I had to admit the dogs’ antics were pretty amusing. Concluding that the bagels I had just spent all day making were definitely not going on the menu anytime soon, I quickly tossed two more “pucks” to the dogs, and the chase began anew.

« The 3%, the Other, and a Broken Mirror
There’s New Voltron Episodes! And He-Man! Thank Zeus. »