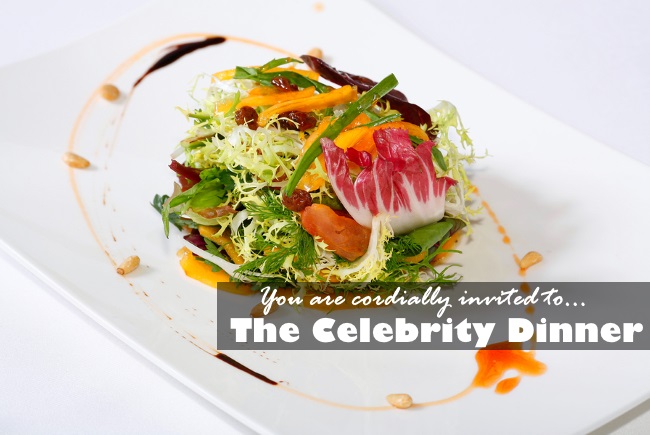 I made it about 1/3 of the way through #NaBloPoMo before my brain failed me and I ran out of something to talk about. It could have something to do with the fact that I’ve used up all my food recipes and haven’t made anything new yet, because when your nose is stuffed, it’s hard to taste anything correctly. At least I can take comfort in the fact that a stuffy nose seems to be the worst of it. I haven’t been forced to take a de/congestant, so you should thank your lucky stars that I’m not writing high on over-the-counter cold medicines.

Fellow contestant Jennifer from MomDad&CuppaKids came to my rescue. If I were having a celebrity dinner party, who would I invite, and what would I serve? Well, for starters I’d probably only invite people who were down to earth and had a sense of humour, cause otherwise I’d be freaking out trying to figure out how to make Canard à l’Orange while my inner Chef Ramsay went all Hell’s Kitchen on my backside.

Chef Ramsay would totally not be invited, by the way. Sorry, Chef. I love you from a distance. Please don’t judge my cooking.

So who would I invite?

The first person who pops to mind is actually Bill Murray. His sarcastic deadpan humor appeals to me, probably because I have a similar sense of humor. But also, Bill Murray embodies everything I think a celebrity ought to be like. The guy has fun. If you’ve never heard the “Nobody will believe you,” stories, well then read them and see exactly what I mean. That is something I would totally do if I were famous. Because, why wouldn’t you do this if you’re famous? I could totally amuse myself doing such a thing for the rest of my existence, except I’m not rich and famous.

So I’ll have to write a kind-of-funny food blog instead.

What would I make? I’d probably make cool custom marshmallows for a nice after-dinner drink and dessert. Maybe Kahlua flavoured ones. Or Baileys. It would be a subtle homage to Ghostbusters. Because, subtle.

It’s a sad state of affairs when you get better news reporting from a satire show than actual news stations. I could totally go on all day about how there’s no such thing as investigative journalism (much less unbiased journalism) anymore, but instead I’ll just say why I’d want to meet him: I think he’d be a great person to have a conversation with. Like, real educated, stimulating dinner conversation, where one talks about politics, social problems, and other news-worthy hot topics that don’t involve what celebrity was recently involved with what sex/drug/DUI scandal. He also seems like he’d be a surprisingly down to earth guy. I don’t know if that’s actually true or not, but since we’re playing lets-pretend anyway, I’m going to imagine he’s the sort of guy who can’t be bothered to be anything else than what he really is.

What would I serve? I’m not sure. I would have to check ahead to see if he’s kosher, but I get the feeling he’s pretty irreverent in practice. If he’s OK mixing meat and dairy, I’d probably make my smoky bacon and tomato fennel soup if it all checks out, because that soup is awesome.

In fact, I wish I had a bowl of soup right now. I’m cold.

I probably don’t have to give a lot of details on why I’d like to meet the coolest Canadian ever. Do I? Nope. Good. He revived public interest in the space agency through the sheer power of his awesomeness alone, and I’m sure you guys have totally figured out HOW I FEEL ABOUT SPACE STUFF considering it feels like I’ve been talking about it every day at some point this month. Who knew a food blogger would spend at least as much time talking about space?

What would I serve? Probably a pasta, like my Creamy Fettucini with Ricotta and Parsley. Or maybe I would some of my spinach pasta and whip it up into a carbonara or Chicken Fettucini Alfredo, but this is less about what I think Chris would like to eat and more the fact that pasta goes excellently with a soup course. And white wine. I love white wine. It can be made elegant without being intimidating and spend a ridiculous amount of time in the kitchen.

And now at this point, I realize that my dinner party invitee list so far consists wholly of guys who are fairly easy-going and funny. Which means that they probably wouldn’t want to do a dinner party at all. Heck, I wouldn’t really want to do a formal dinner party. So maybe instead I’d invite them over to watch the game in my hubby’s man-cave and serve slow cooker beef poutine, nachos, and maybe some potstickers for a little variety. I’d still make the marshmallows, but they’d probably become some sort of smores snack.

I’d open up the guest list and grab Nancy Carell. Steve is cool too, and he can come. Who wouldn’t like hanging out with “The Most Normal People in Hollywood?” And I would also hang with Emmanuel Lewis, cause believe it or not, I’ve met him before for work-related reasons, and he’s a totally nice guy. Are there any other actresses who would make my list? Probably Mila Kunis. She’s sassy.

And probably I’d invite Chef Michael Smith and his wife, because I figure at the very least I owe him a beer for blaming a kitchen disaster on him. And then someone tagging him on Twitter about it. Even though he was totally cool about it.

Okay, I think that’s enough cool people to hang out with. I label this post complete.