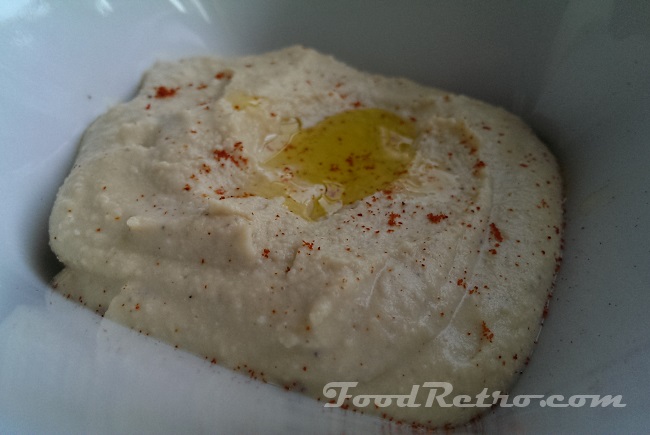 And just so you know up front, I found the Grail. Bear with me – this will be a bit of a long post, but there’s a reason. This isn’t really about the recipe. Hummus recipes are almost depressingly identical, give or take a few chickpeas. This post is longer because I’m covering and comparing the two best methods I found and explaining the whys. There’s a recipe too, at the bottom.

I’ve become something of a Food IT person. Conversations usually go something like this: “So I’m making bread but it cracks in weird spots. How do I make it stop?” Or “Why does garlic turn green when I cook it? It’s gross.” Most recently it was my son’s Kindergarten teacher (a great fan and a happy guinea pig for some of my recipe testing). “Help!” she said to me, “I’m spending a fortune in store-bought hummus, but homemade hummus is gritty and gross. I’ve tried everything. Figure out how to make store-bought texture hummus.”

“Okay,” I said. I would have said, “Challenge accepted,” but, like regular IT workers, I usually only get crickets when I quote memes and other nerd humor. Besides, I need something to blog about. Why not hummus? People like hummus. Well, except for me, cause beans of almost every type and I just don’t see eye-to-eye. I’m rather like a five-year-old on the subject. Chickpeas (aka garbanzo beans) are stinky. P-U.

The sacrifices I make for food and food science. 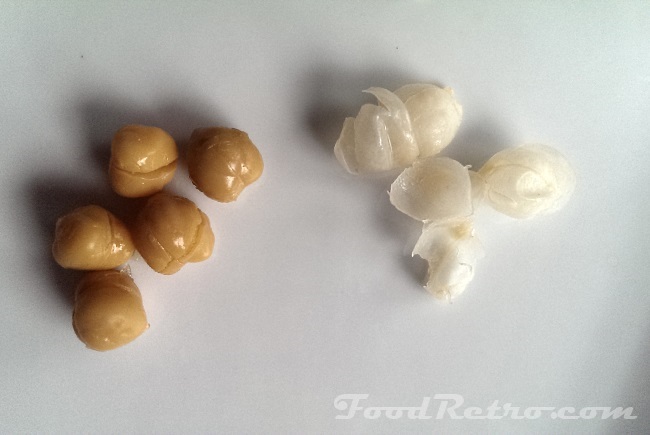 A quick read of the internet revealed that the techniques to (supposedly) obtain that perfect smoothness are many and varied. So I decided to give two that looked the most promising a try. One was from Inspired Taste and the other was from a cookbook called Jerusalem (which ironically had the most different recipe of all I looked at).

To make the contest fair, I dispensed with Jerusalem’s recipe and used the same recipe for both A) so I would be working with a level playing field, and B) cause the ratio of tahini to chickpeas was huge. So huge, in fact, that I wondered if the tahini was just masking lumps.

Inspired Taste’s technique says:  it’s all about food processor order (specifically and most importantly, whipping the tahini and the lemon juice first). They use canned chickpeas, and while they say skinning helps, “it’s not worth the 10 minutes.” Novice to skinning chickpeas as I was, I thought 10 minutes to skin a can of chickpeas was a little overoptimistic. But I figured I was already starting with a handicap by using my homemade tahini, which was made of unhulled brown sesame seeds, and was not as finely ground as commercial tahini. So I peeled them. 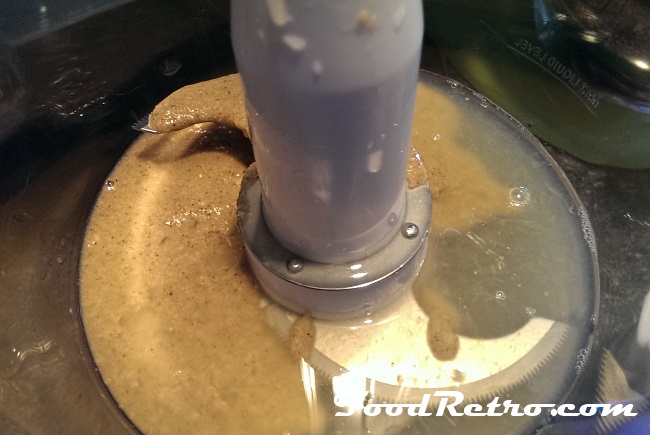 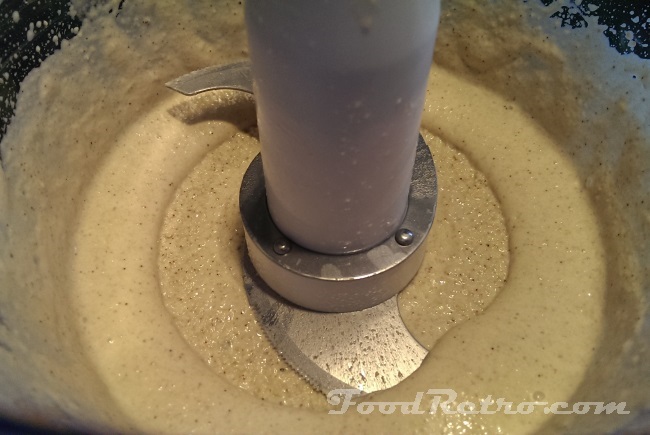 Once the tahini and lemon juice is creamed, you add the rest of the ingredients while the food processor runs and pause to scrape the sides and bottom of the bowl occasionally. It’s a necessity; chickpeas have this amazing will to live. So break out your spatula.

Once everything is well combined, you lighten the density by adding cold water by the tablespoon until you get it the way you like it.

The Inspired Taste verdict: It took me about 30 minutes to make this, and 20 minutes was peeling chickpeas. If you can deal with texture from leaving the skins on, that means it’s like a 10 minute recipe with the canned chickpeas. Not shabby.

I shared this one around and everyone agreed it was very close to being store-bought in texture. It’s a little rough in appearance. I might have been able to get a little bit smoother with a third tablespoon of water. Still, it was better than anything they had been able to achieve previously on their own. They were happy with it. Thumb’s up! 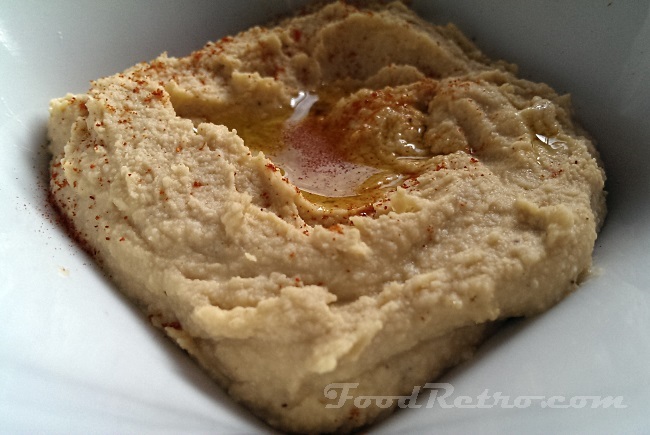 The Jerusalem recipe says: It’s all about breaking down the pectic bonds in the chickpeas. Pectic? No kidding; chickpeas are high in pectin (yes, the very same structural polysaccharide you use to make jam turn from a syrup into a set glop). Pectin’s kryptonite? Anything alkaline (possessing a pH higher than 7), which includes our dear friend baking soda.

Baking soda in combination with dried legumes is not a new technique. But when people ask what the baking soda is for in a hummus recipe, the collective wisdom of the internet mostly results in the unimpressive half-truth: to “maybe” reduce flatulance. Beans, beans, the musical fruit. The more polysaccharides you eat, the more you toot. 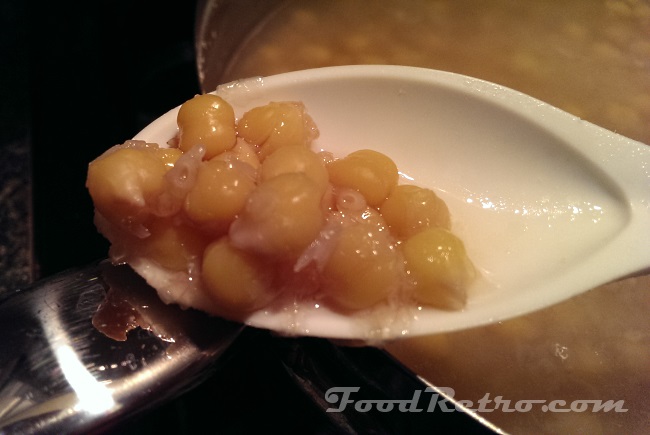 The Jerusalem method uses dried beans that have been soaked. So, prepwork is involved, if you can call dumping a cupful of dried beans into a bowl of ordinary water and going to bed “prep.” When you’re ready to rumble, you begin by sautéing the drained chickpeas in a deep skillet with a teaspoon of baking soda over high heat for 2-3 minutes (or if you mess with the recipe, about a a scant 1/2 tsp baking soda per cup of chickpeas). Afterwards, you pour your water in, put the heat on medium and a lid on your skillet, and mostly ignore them for 20-40 minutes, or until they squish when pinched, but before they go mushy.

What does baking soda in hummus do? Welp, for starters, the outer hull of the chickpea virtually DISINTEGRATES. Yeah, you see the picture up above of the peeled canned chickpeas? Check this out. No peeling required. No picking them out required either. And no pressure cooker or hours of boiling required. Being flatulence-free is just a bonus.

So to reiterate simply, because sometimes I get all excited and speak in loving words about science:

Why is there an asterisk? I didn’t add the olive oil into the food processor this go around! I was afraid to. I was terrified it might end up too oily. Didn’t miss it, in any event. I didn’t have to add hardly any water either. Good grief. 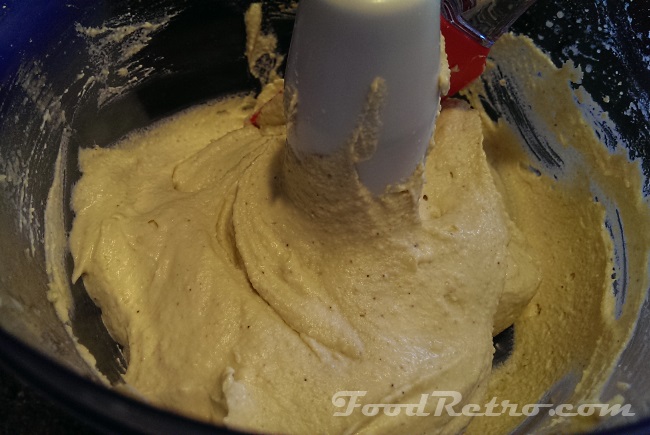 Jerusalem method in food processor – without oil or water added.

The Jerusalem verdict: It took me 12 seconds to put the chickpeas to soak in water. I don’t really count anything I can do in less time than it takes to brush my teeth and then sleep through as preparation time (sorry). Beyond that… 3 minutes to saute, almost 30 minutes on the dot to simmer, 5 minutes-ish in the food processor, or 38 minutes in total. So, a little bit longer than the Inspired Taste method, but still not that bad.

Compared to each other? Well… a picture is worth a thousand words. See for yourself. 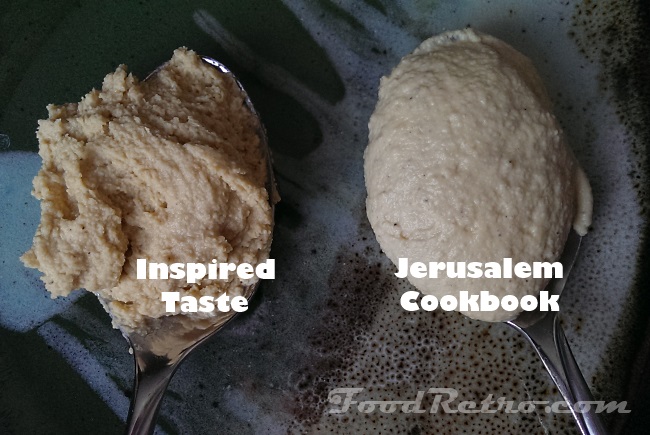 Beware, here there be haters of baking soda: There were two counterarguments to using baking soda (albeit in the soaking, not in sautéing). The first was that there is a soapy after-taste. Solution – you used too much. Use less. That was easy.

Hate item #2… baking soda reduces vitamin B6 content. I could open the proverbial can of beans (ha!) by bringing in the arguments that legumes are non-nutritive. But this post is getting long already and I don’t know anybody who has problems eating enough B6. Considering meat and meat alternatives are all good sources, I suppose if you’re a super-picky vegan, it could happen. If you’re worried about your sources of dietary B6, then eat a banana or one of these other items on this handy list. You’re welcome. 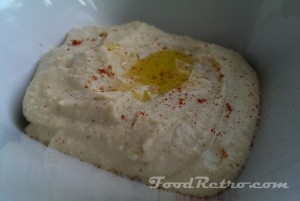 Two ways to make hummus with a store-bought-quality smoothness and fluffy consistency.

I used my homemade tahini using unhulled sesame seeds in this recipe with excellent results.

Disclosure: this post contains my affiliate link to Amazon.

« Must Be Some Kind of Blind Love
How to Blanch Spinach »