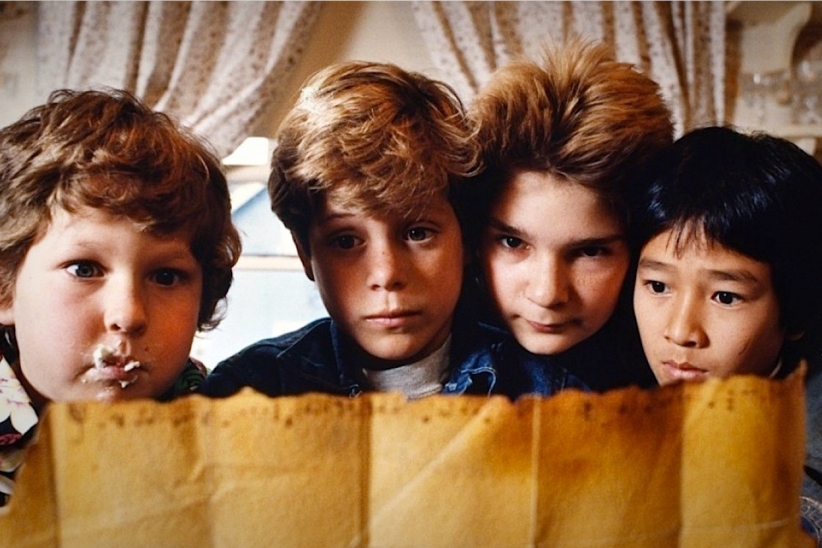 I’m all about the retro films, introducing my son to the oldies-but-goodies. But there’s a double-edge to watching a bunch of the adventure movies I grew up with as a kid on Netflix, like The Goonies. And the cutting backside of that is that I’m faced with the incontrovertible truth that childhood isn’t like it used to be.

We freaking loved The Goonies, in large part because stumbling across some awesome gold treasure while hanging out at the beach with our buddies was (while statistically improbable) not an impossibility. We all knew someone who had a metal detector that they’d take to the beach for exactly that reason.

We were all sure that with just a little luck, we might have this adventure ourselves.

These days, few things make me sadder in life than the existence of helicopter parenting. Well, besides the fact that not only do I have to make sure my kid is in sight, but now I also have to worry about being judged when I bring a book to the park or check my emails.

Social media has somehow convinced people that letting kids play on a see-saw is dangerously irresponsible; I not only grew up in an age where it was a common practice to teach us to swim by tossing us into the deep end pools, I read 1984 and believed that the author was telling us that constant surveillance was the surest sign we were on our way to Big Brother.

How ironic that we’re still on our way there anyway.

I know I’m prone to early-onset old-cootism and fits of “When I was that age…” but I did all kinds of crazy things when I was “that age.” We lived in big, old-school neighborhoods where we were set free with the rules to be back by dark.

Hazards? Oh yeah. It was Florida. Everyone had an unattended pool. There were lakes full of alligators and poisonous water moccasins. Roads where people drove cars. Whole neighborhoods of strangers we barely knew.

Bike helmets? PFFFT. And see-saws were the freaking bomb.

And these were some of the happiest times of my life. I have memories of my siblings and I sitting perched in a derelict Kumquat tree we had in the backyard, peeling and eating these super-tart somewhat-wild fruits. Of grabbing our bikes and taking ourselves off to wherever we felt like, traveling in packs and winding up at a random kid’s house to grab snacks or watch movies whenever we got bored of following the mail truck, or playing in Mr. So-and-so’s sprinklers, or playing hide and seek in the thick growth that was the undeveloped land on one section of the property. Of being let loose in handfuls to go Trick-or-Treating in the poorly-lit dark entirely unescorted while our parents stayed home and minded the doors.

Somehow we all managed to grow up. And not one of us ever found razors in our apples or took candy from strangers. You know, except during the Halloween thing.

You know why? We had been taught to swim, to avoid the tall grass at the untended edges of the lake, and to never let one of our own get in the car with someone we didn’t know. We looked out for one another–and in their own way, so did every adult.

We were still a village back then. Retired elders would spend the hot parts of the afternoons chilling on the porches, beers in hand, keeping a passive eye and an ear out for children running amok. The homes with kids had enough Capri-suns and junk food to host the grazing habits of entire migratory herds that might pass through, being OK with that, knowing that we’d wind up at someone else’s house next time around. And every single adult felt free to step in with discipline when necessary–to break up fights, prevent property damage, or just to “get us off the boob tube” and back out into the outdoors.

We all turned out OK. Perhaps better than OK by today’s standards, because we had an inherent, built-in respect for adults who would let us toe the line but still hold us responsible for our muckups.

But I think about the memories my son is going to have, and to be honest, it depresses the heck out of me. Rather than exploring the neighborhood with his friends and getting into trouble that he’ll have to get himself out of, he’s going to remember his mom escorting him to the park and being there the whole time. Or he’s going to remember sitting in front of his tablet playing Minecraft, because he’s not old enough that I can let him go to the park alone if I’m not free to go, too.

Even if I don’t agree with this system, I’m compelled to. There’s stories in the news all the time about social services being called on parents who let them walk to the park or home alone. Even if I want to fight the system, I can’t. He’s got no pack of friends to go hang out with, because his friends are stuck in camps or in front of screens when the adults have to get stuff done. Same reason.

How did we begin to equate fostering a kid’s sense of self-sufficiency and independence with parental neglect?

I can’t actually let him walk himself a block to the park, in our sub division, by himself… until he’s twelve. And if you want my honest opinion, it’s too late by then. Teenagers–and nearly teens–are hormone-impaired creatures. Do I really want my kid to be responsible for learning to be independent for the first time in his life at roughly the same time he’s likely to discover teenage rebellion and that girls make him tingly? Nope.

I have a wish that we could learn to let go a little more again, and that we’d connect a little more, like we did in the old days. Rather than tell our neighbors to mind their own business, rather than suspecting every stranger of being perverse or hostile, rather than fall prey to this idea that we’re incompetent if we don’t raise our children single-handedly (I’m looking at you, mommy wars), perhaps we need to learn to loosen up and freaking let go.

Our risk assessment has been totally warped. We should accept some of the wisdom that raised Gen X: we can raise healthy, well-adjusted and smart children without having to do it all by ourselves. We can agree that learning how to take a small, calculated risk is part of growing up. Working together, we can be a protective community that can loosen the leash enough to still let kids learn to be self-sufficient human beings and still have a small taste of adventure.

But I guess until then, I’m going to have to keep watching kids have adventures in the old movies on Netflix and hoping that maybe one day soon, the attitudes will change back to the way it used to be.

The Goonies is available to watch on Netflix Canada.