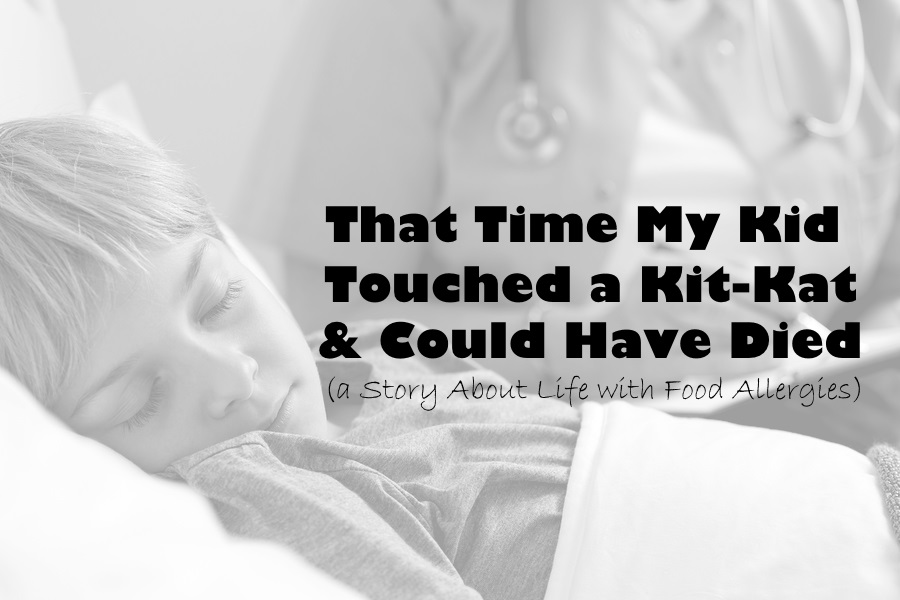 The bus my six-year-old son rides finally pulls up to where I am waiting; it is 10 minutes late.

Every time it is late, I worry that there has been an incident, especially when I have heard sirens anywhere in the area. It’s a fairly low-grade fear, however; I live in a city of 500,000 people, and sirens aren’t uncommon. I have some comfort in knowing my son carries his Epi-pen bag with him–after a couple of weeks of lectures from me, he remembers that he needs to have this bag, even if he brings nothing else home.

My son has food allergies to nuts, peanuts and dairy. I have been told by some that they are my fault. I cleaned too much. Breastfed wrong. I’ve been told my son is defective—that he should die. Over time there has been more support for kids with food allergies, but there are still so many who would make us stand alone–who’d make our kids stand alone.

The village wants to expel us.

I try not to think about that.

I also try not to think about whether the other children on the bus would recognize if my son was in distress and would try to inform the bus driver if unable to do it himself.

I hope his Epi-pens are still OK. We’ve been having frigid weather, and my son has to walk a half a mile home from his stop. Policy. His Epi-pens are in a case, in a bag, in another bag in his school bag. I hope that’s enough insulation to protect them for the walk.

My son gets off the bus. His first words to me are: “Mom, my stomach and chest hurt.”

His stomach hurting is always the first sign when he’s having a reaction.

I freeze in panic for three seconds before my brain goes into crisis gear. People have always told me I’m amazing in a crisis. I never tell them that I always panic for three seconds first. The truth is that I know on a deep, instinctive level that if I don’t take control, I can’t fix the problem. I don’t like the way crisis feels. So I automatically reach out to take control. That’s all that there is to my amazing crisis-handling skills.

So my first words are: “Are you having a reaction?” If the answer is yes, then I know exactly what I must do. I will rip open his bag for his Epi-pens. I have my cell phone. I will inject him and then call 9-1-1.

But the answer is “I don’t think so.” I have to fish for more information, because that’s how six-year-old boys work; they’ll never think to volunteer up anything. And really, at some level, I get this. He’s a kid. I’m the adult here, and it’s my job to protect him because kids are emotionally, physically, and mentally immature.

So I start launching into the questions that will help me determine if he’s been exposed to an allergen.

Does your throat hurt? Were kids on the bus eating near you? Did you touch anything that you shouldn’t have touched?

My son tells me then that he picked something up at school. He thought it was a piece of plastic, and was planning to throw it in the recycling bin, but it turned out to be a chunk of Kit-Kat instead. The chocolate melted all over his fingers, and he washed it off.

My stomach sinks a little bit. Did you touch your face or your clothes before you washed your hands? Did you taste it? Did you smell it?

Did you wash your hands really well?

He says yes, but I am skeptical.

When did this happen? I ask next. The when is usually the most damning. If it happened first thing this morning, it’s unlikely to be the culprit right now. Unfortunately, the answer is that it happened right before he got on the bus, which gave him just enough time to start having a reaction if he perhaps touched his face or stuck his fingers in his mouth while on the bus, as sometimes he’s wont to do. If he didn’t wash well enough. If he even is having a reaction.

We have been walking home as I have been grilling him, on hyper-alert the entire time and encouraging him to double-time his usual dawdling stroll. I ask him every so often about his stomach and his throat. His throat feels fine, but his stomach still feels terrible.

Of course, the answer again is yes. I relax a fraction. It could be that he’s just got to go. But then again, he’s never complained about his chest hurting from needing to go to the bathroom. I don’t like the timing of the Kit-Kat either. And usually when he’s got to go, he just says so.

We aren’t out of the woods yet, but so far, nothing has happened, and the likelihood is less with every growing moment.

In the background of my thoughts, I am thinking about whether an Epi-pen is capable of stabbing through snow pants. I know it can go through jeans, but perhaps snow pants and jeans together would be too much. I won’t risk it; even though it is -12C outside, I will have to strip his snow pants to inject him on the icy sidewalk, and then try to get him covered up again, keeping him warm against shock. At least I would be easily visible to an ambulance from the sidewalk, though there’s an ice-crusted snowbank about 20 inches tall and six feet wide between us and the roadway that we would have to deal with it.

I can carry him if I need to. He’s a skinny boy; only about 42 pounds. And it’s only about 6 feet. I’m sure the paramedics would help me. They would reach.

After the longest 20 minute walk ever, we reach the house. I push my son into the bathroom. And I wait.

I run down the list. Throat? Belly? Lungs? Everything comes back OK.

I hug my son and tell him he did the right thing by washing his hands right away after touching the Kit-Kat. Then it’s time for another safety PSA about another situation that I didn’t anticipate when I’ve had to tell my son all the things that he can’t do.

People who aren’t allergy moms will tell us that it’s my responsibility to teach him how to live among others who have no restrictions. I try, but I think that they have no idea what it’s like to give their child a list of things they should never do. I’ve told him never share food with other kids; never eat anything that another child has touched, even if it’s his own food. Don’t let kids touch your desk without washing their hands if they’ve been eating cheese.

But I’ve also had to think up all the other heartbreaking things that they probably wouldn’t think of in my place. Like to stow anything that touches a food allergen in a plastic bag until I can clean it. To never let anyone kiss his face, especially on his lips. Even if it’s a family member.

One day he might want to kiss someone, and I don’t know how we’re going to deal with that safely.

But for now, I look into his eyes and tell him, “Listen, if you see garbage on the ground and you want to pick it up, use a paper towel to pick it up safely. Or better yet, just leave it alone.”

My son thinks litter makes the world ugly. It kills me a little inside to know that, for his safety, I have to curtail his desire to make the world a cleaner place because touching the wrong thing could kill him.

This is what it’s like to be the mother of a child with a food allergy.