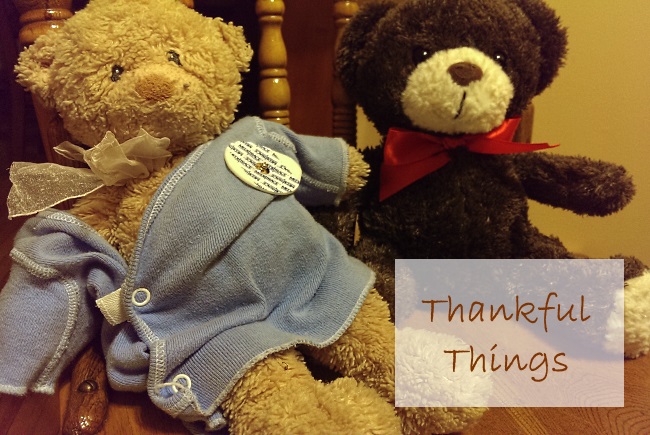 Today, I’m thankful that an accident at Thanksgiving didn’t cost me my son’s life.

I am thankful to Pfizer, who makes the EpiPen–an auto-injector that may be responsible for the positive outcome of yesterday.

I am thankful that my husband remained cool enough under fire and was brave enough to administer my son’s EpiPen while I was calling 911.

I am thankful for emergency responders who answered the line promptly, and paramedics who arrived quickly.

I am thankful that “Spanky” and the other paramedic were kind enough to help us keep my son calm by telling him stories and showing him tattooed hand-prints of their own children.

That they pulled the ambulance over when another car cut me off so I wouldn’t get separated from them driving on the way to an unfamiliar hospital.

That they gave him a bear he clung to the whole ride there and the whole time we were in the hospital.

I’m thankful to Tim Hortons (even though I’ve griped from time to time about people filling their drive-throughs to the point where they block lanes on the street) because of the amount that they give back to the community. They have camps for needy kids. They sponsored most of the uniforms in my son’s soccer league (the same league here in Hamilton where the manager was charged with fraud). They sponsored all of my son’s hockey league’s uniforms, too, last year–and probably will again this year.

Tim Teddy, sitting upper right, is the stuffed animal the paramedics gave my son. He’s yet another service given back to the community from Tim Hortons.

I’m thankful to the on-call doctors and nurses of the Fergus hospital for doing what they do, and being patient with a little boy.

To my husband’s cousin, who brought us my son’s other teddy bear, Fozzie (but recently and temporarily renamed Hobbes), on her way back to London after my son said he missed him.

For Shoppers Drug mart being open til midnight the day before the Thanksgiving holiday so that we could buy two more EpiPens and the oral steroids that the doctor prescribed, hoping they would stave off a secondary reaction.

For everyone who gave us a helping hand yesterday that I might have missed.

And I’m grateful beyond belief that I have a son who’s a gentle spirit and wiser than his years. One who came and told us right away when he was having a reaction. And one who told my husband, “daddy, there’s nothing to forgive,” when my husband apologized for hurting him with the EpiPen.

« Never Too Late to Learn
Carnation® Cream of Mushroom Soup »