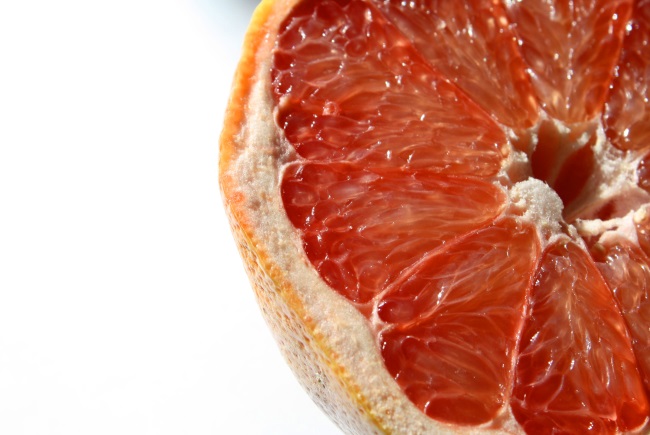 The occasional kitchen failure is part and parcel of experimenting in the kitchen. Food bloggers seem to hate sharing these stories… maybe because they think it undermines their authority as an expert in food. We tend to be perfectionists and that’s too bad cause sometimes this stuff is like comedic gold.

The reality is, Stuff Happens. Even to the best of us. Especially when you’re attempting small batch jam with someone else’s brand new recipe, and you’re going into it pretty skeptical in the first place.

I look forward to winter every year, and not because I hate the heat (which I do) or because I can’t wait for Christmas to come (which I can). November begins the Floridian grapefruit season! And as such, it makes traveling to Costco in the two month window around Christmas very semi-bearable, because my local Costco carries 10 pound bags of Ruby Red and/or Pamplemousse from Indian River County and environs. The only thing that could possibly be better is if they could get their hands on the holy macguffin IRC white grapefruit and send the entire shipment to Ancaster Costco, thereby saving me the ethical dilemma of considering selling my firstborn to afford to ship a case from Hale Groves. By the way, I am not being compensated by Hale Groves for this (But if anyone from Hale Groves is reading this… HMO, yo. I will work for white grapefruit). 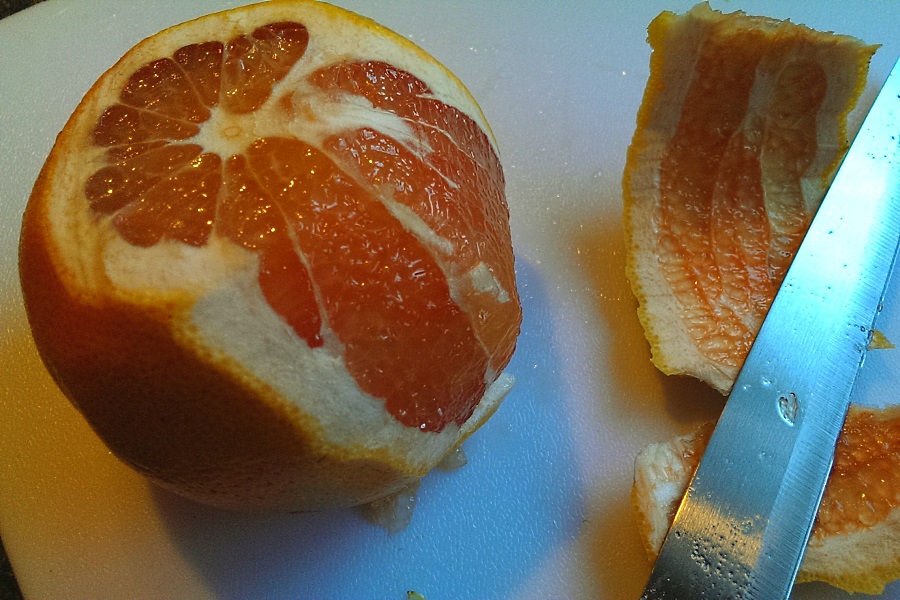 To supreme, cut the top and bottom flat, and then carve the skin and bitter pith off in a single slice that follows the curve of the fruit

I’m a grapefruit snob, as only someone who has tasted real grapefruit can be. And believe me, there’s only one place in the world that produces it. It is like ambrosia; you do not put salt or sugar upon it, for that would be messing with perfection. Supposedly, it’s the incredible, extremely unique soil composition found only in this one place on the planet that produces grapefruit that is like the nectar of the gods. At any rate, it’s worth breaking your 100 mile diet for a taste of the genuine article (unless you’re on statins, in which case–sucks to be you). Sorry Texas and California; you don’t got game. Your sour, bitter fruits are like lemons in the face of this sweet grapefruity goodness.

My eyes this time were bigger than my stomach, and I bought two bags, forgetting that last year I gave half of them away to mooching friends and family without Costco memberships. I had eight grapefruit staring at me for the last two weeks, and not a single desire to eat them. But they needed to be consumed; their skins were beginning to go soft and easily bruised. And then I stumbled across someone’s recipe for grapefruit jam, which, by the most magical of coincidences, required exactly eight grapefruit. 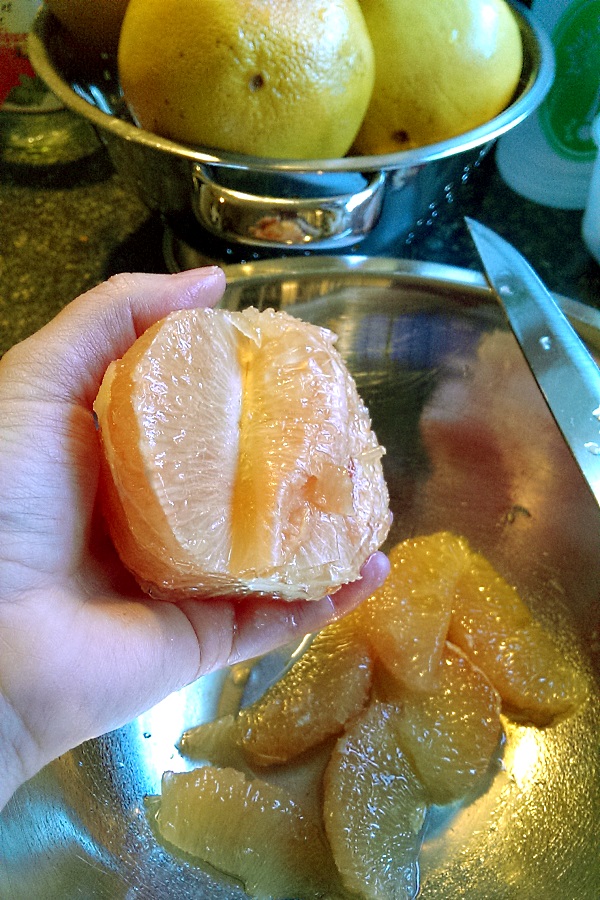 Step two – section the fruit after cutting off the outer skin/pith by slicing on either side of the separating membranes. You want a bowl. Trust me.

So I began supreming my fruit. To supreme a grapefruit (or any other citrus fruit), what you must do is slice the top and bottom so that the naked pulp shows, and then, using one of the cut edges as a sturdy platform, slice the white pith and a thin layer of the outermost part of the inside fruit. Once you have done it all the way around, you can section the fruit by slicing out the sections between the white membrane lines.

If you have never supremed grapefruit, it is quite easy. All you need for success is a hard,flat surface; a soft touch; a knife sharp enough to take off your fingers if you’re not careful; a big bowl; and a shower for afterwards because you will be dripping with goo from the elbows down. It makes for a great party trick, if things like breathing fireballs with high proof rotgut liquor no longer impress your friends.

As I’m working my way through sectioning the 7th grapefruit, I look down into the almost-full bowl of glistening deliciousness and realize: I have never wanted to eat grapefruit more in my entire life. Naturally. I was ready to kick the grapefruit jam recipe to the curb and grab a spoon, because my brain was screaming: YOU ARE GOING TO PUT SUGAR IN THIS GRAPEFRUIT. Sacrilege! 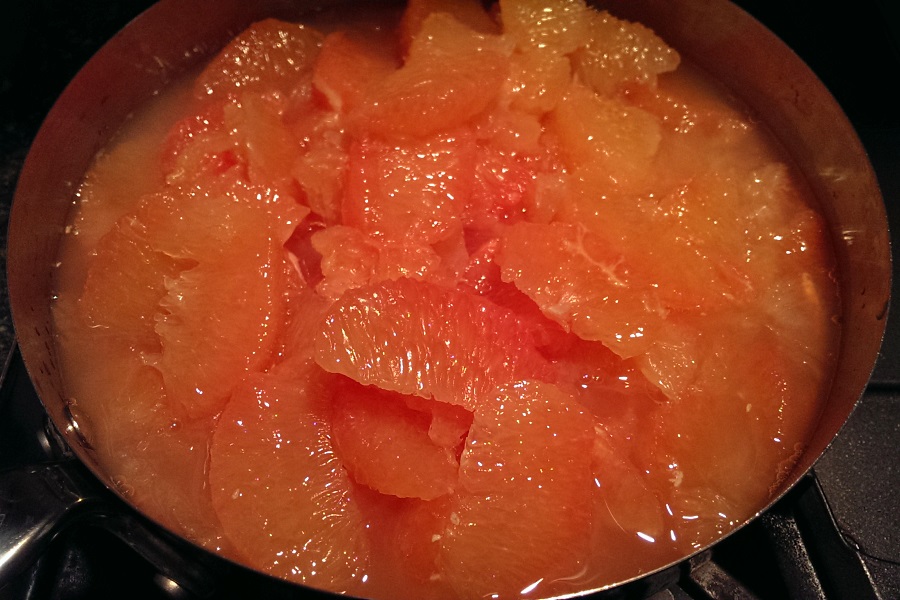 Sectioned grapefruit. Unfortunately it’s in a pan, instead of in mah bowl, where it ought to be.

Deep breaths. Stick to the game plan, here. I wrestled my urge to eat the entire bowl of grapefruit under control; contented myself with nibbling the bits still stuck to the rind I had sliced away. And I convinced myself I might even learn to like eating grapefruit jam.

Well, doesn’t the moral of today’s story be: never count your jelly jars before they set when using an unfamiliar recipe. I did try to salvage the batch by increasing pectin and sugar, but citrus fruit doesn’t stand overcooking. In the end, it never set. Recipe busted.

I should have grabbed the spoon. 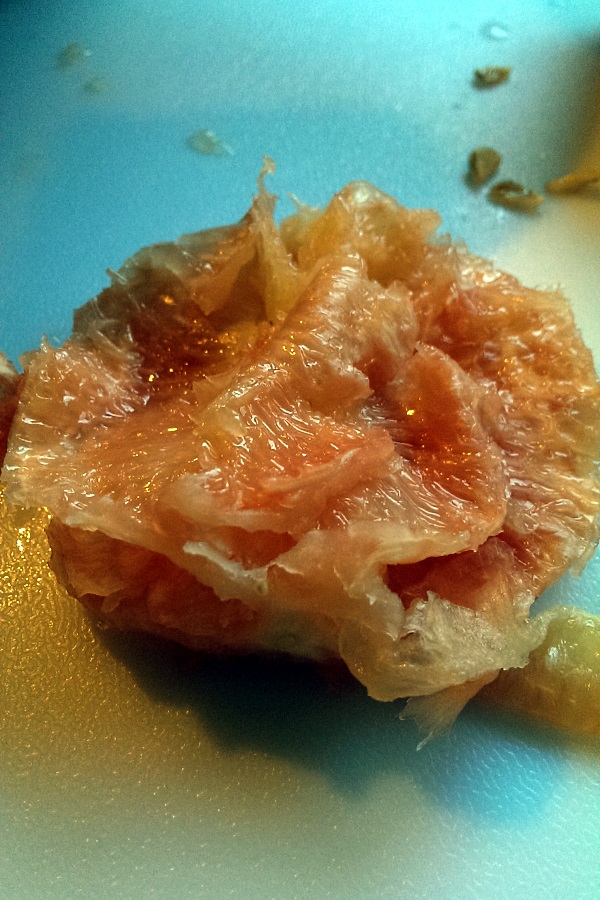