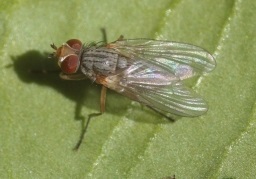 I saw these flies around my garden about a month ago, but I paid them no real attention.  I thought they were ordinary house flies.  Boy was I wrong!

Observe: the adult phase of the Spinach Leafminer (picture from Wikipedia.org), which began attacking my spinach a few weeks ago.  Even then, I didn’t pay much attention to it, because I was only losing the occasional leaf.  I had a lot of spinach, and figured whatever pest I had didn’t appear to be making inroads enough to concern myself with full-scale warfare.

As the damage began spreading, I took to the books.

There is a common pest section in most gardening books.  I checked four of mine, and none of them referenced the leaf miner at all.  Well a picture is worth a thousand words, and image searching “spinach pest” quickly brought up a visual match…  and then sent me back outdoors with a pair of scissors.

It turns out that the spinach leafminer, which also affects beets, chard, and other greens, is fairly easy to control… if you’re diligent and observant.

The fly lays small clusters (~2-5) of white eggs on the undersides of the leaves which hatch four to six days later.  The most obvious sign of infestation is the larval phase, in which they burrow into the leaf.  After a week or two, the larvae mature and drop into the ground where they pupate.  Two to four weeks later, the adult fly emerges and the cycle begins again for three or four generations.

Since the pests are protected for most of their life cycle, most pest control suggestions are not chemical.  Early detection is key to reducing the infestation.