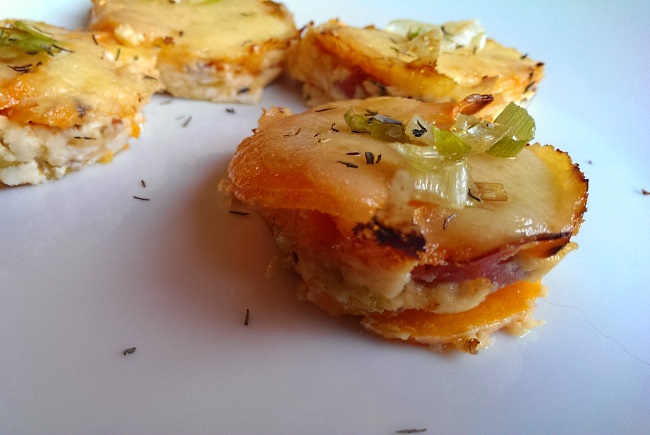 Easter is fast approaching! I’ve been working on my plans. I’m only having a small turnout this year of only 15 people. Before you choke and say only 15 people?? I’ll just say for the record that last year  I had 30! My poor house was overflowing with people, and my husband looked like he was going to have a nervous breakdown, but it was fun.

15 seems like cake to me. I only have to cook one modest-sized turkey.

So, I was puzzling the menu on one of my favourite crowd-sourcing mediums (<3 Twitter), and ideas were coming fast and furious. Campbell’s suggested baked beans to me, but I don’t think I’d have enough people interested in eating them. Scalloped potatoes is a good reliable ol chestnut for a family dinner, but… I don’t know. I was looking for something daring and different that I could also post about for here.

It just so happened that still leftover from my CSA pickings, I had a handful of sweet potatoes. What if I just took the good ol reliable chestnut of ham, potatoes, cheese and onions, and amped it up a bit? 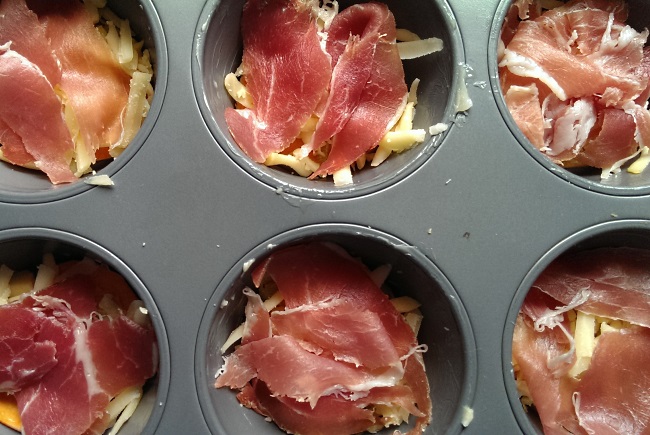 What is Proscuitto? Fair question, if you don’t live in the middle of a city that’s heavily Italian like I do. It’s a leg of ham that’s been dry-cured for between 9 and 24 months, very thinly sliced, frequently served wrapped around asparagus, or honeydew melon as an appetizer. I know that Prosciutto is typically served uncooked. I’m not a big fan of it uncooked. But before anyone gets all purist on me, let me just say if you’ve never tried subbing out regular ham for Prosciutto in a “cooked” recipe, I think you’re really missing out. You don’t even need a lot. Just a bit, just like in this photo.

And leeks: poor leeks. One of the more under-used options from the grocery store. People don’t know what to do with them. Think green onion on steriods, and use it accordingly. You just whack off the dark green top and the root, and use the stalk part. They can sometimes be a bit gritty sandy though, so make sure you slice it down the middle and wash them well. And if you feel bad about discarding the top green part, wash it too and stash it with your stock-making scraps in the freezer. 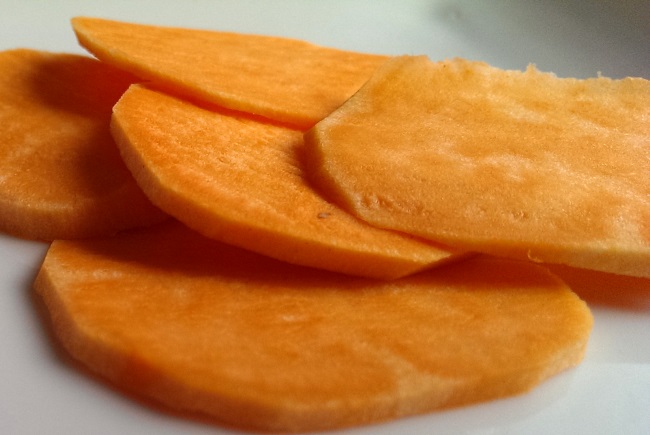 Now I can’t decide whether I will actually serve these for Easter or not. Not because they were bad, but because they’re like dangerously delicious.

I’ll probably have a legion of family watching their cholesterol cursing my name. 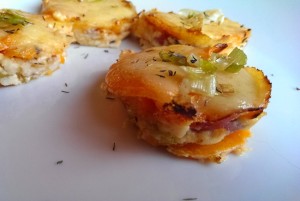 A decadent twist on the old chestnut of scalloped potatoes: sweet potatoes made savoury with smoked Gouda, Prosciutto, and leeks.

A sharp knife and thin slices of sweet potatoes is the key to quick baking.

You can make these in a mini muffin tin for bite sized appetizers.