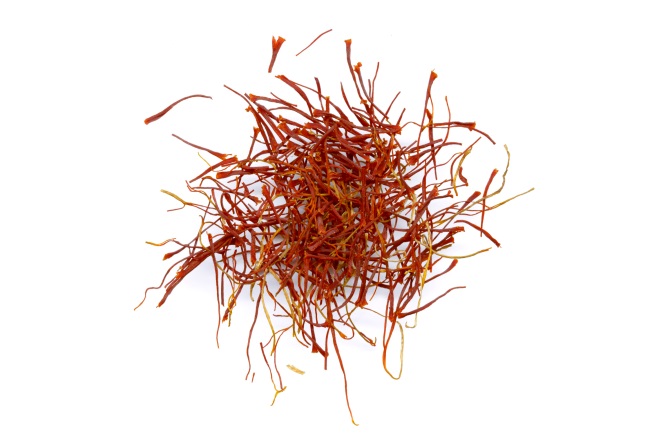 I’ve been thinking about adding more in general herb lore and home remedies on my site, but leave it to Meg to put a boot to my backside. Enjoy the first post of a new series, and please give Meg a lot of love for being a dear and washing her mouth out a little bit with soap before she wrote a post for me. 😉

In recent years, research has been pushing the boundary of what we know about plants for the treatment of mood disorders. While it is still an emerging field, there are a number of studies showing that certain herbs are just as effective as pharmacological intervention in the treatment of depression.

One of these is saffron, the almost-bitter earthy tasting herb from the purple saffron crocus (Crocus sativus). But the whole flower isn’t of use to us for depression. Instead we only need the female part of the flower, the orangey-red stamen from inside the purple bloom. (Apparently, the male part of the plant doesn’t do s**t until it’s time to procreate. Lazy bum.)

So, what does the stamen do?

Saffron has been shown to improve depressive symptoms in those with Major Depressive Disorder(1), and may be just as effective as Prozac in coronary patients(2). This antidepressant effect may occur because saffron increases levels of certain proteins in the brain including Brain-derived neurotrophic factor (BNDF)(3).

“Brain derived what now?” BNDF is critical in neuroplasticity and neuroresilience—or protecting and growing new neurons—in certain areas of the brain. One of these brain regions is the hippocampus, an area of the brain shown to be damaged in those with depression.

Saffron may also play a role in the 5-HT gene which has links to both depression and obsessive compulsive disorder. By acting on the serotonergic system, saffron may have the potential to provide some relief for obsessive-compulsive behaviors when the system is functioning properly(4). However, more studies need to be undertaken to explore these links.

Saffron also counteracts ketamine-induced schizophrenia-like behavior in rats(5), which I assume was put to the ultimate test under a disco ball with techno music. And if saffron can put a stop to all those insane rat-twerking parties going on in the lab, it might manage to decrease at least a few of your non-twerky stress responses, regardless of whether your stress involves disco balls or glow sticks.

Scientists. We do s**t in a lab you’d get arrested for in your garage.

How to Use Saffron

You can use saffron to make some pretty amazing Indian or Spanish dishes, or just add some to the water when making rice or quinoa. I like mine in tea form, probably because I rarely think about it during the dinner rush. (Unless I’m twerking. Then I drink it CONSTANTLY.)

Whatever I am up to, I just steep a pinch in hot water and drink it with coconut oil, milk and honey.You can order good saffron online, but it is expensive to buy in large quantities if you plan to use it often.

Luckily, it is easy to grow. I kill a ridiculous number of plants, but this one lives in spite of my practised neglect. You can get a starter kit of twenty bulbs (or corms) here.

Plant corms 4 inches deep and 4 inches apart. Make sure they are in full sun with well-drained soil moderately rich in organic matter. While saffron is a perennial in zones six through nine, if you live in a climate colder than zone six, you will need to bring them inside over the winter if you want them to come back every year. Usually you plant in the fall and won’t get a lot that first winter harvest, but the bulbs multiply quickly in the first year or two, leaving you with a lovely bed of purple ground cover that you can eat.

Not much to dislike about that, especially after you start reaping the benefits of saffron. I suppose it is always easier to be happy when you are having more orgasms after drinking tea and smelling flowers. That’s just good times. Plus, there’s always the twerking. But no ketamine…unless you’re a scientist. (Suckers.)

Megsanity started as an inkling in the back of the brain of a shrink. Somewhere in the midst of thousands of therapy sessions an idea took shape: that women are not quite as dysfunctional as they are made to feel. Megsanity loves to swear like a sailor when her children aren’t listening, and uses sarcasm like it’s her job…and maybe it is.

She’s also the smartest person I know in the blogging arena. She can be found blogging over at Megsanity. Women, psychology and expletives. This ain’t your momma’s psychology blog.

Please note: saffron should not be used as a stand alone treatment for depression. If you are suffering from depression, please seek the assistance of a clinician.

« Madness, May Showers, Mud, and Mess
The Science of Whipped Cream and Butter »