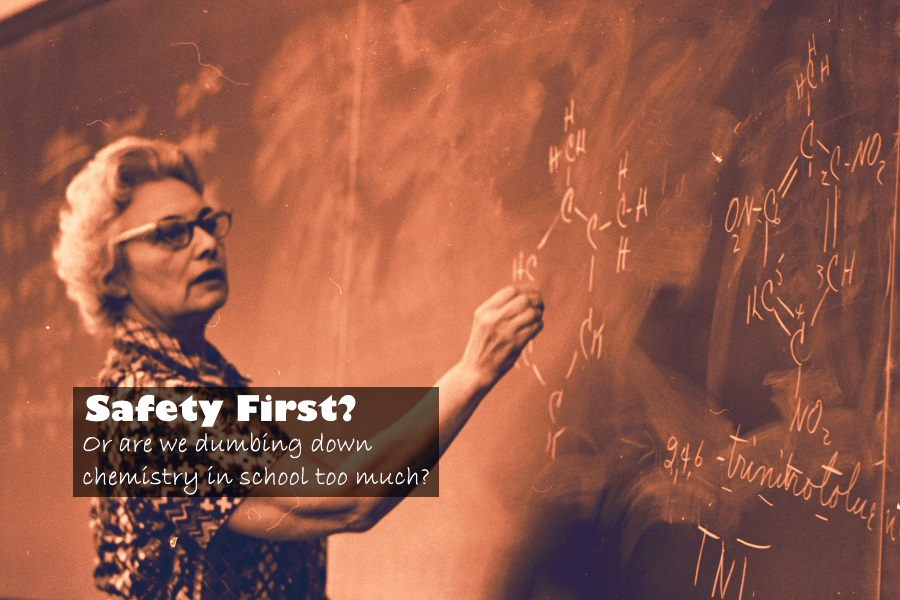 People like to quote Oppenheimer when they talk about science that has forever altered the world. “I am become death, the destroyer of worlds,” did inspire decades of science fiction dystopia, I suppose, and the atomic bomb did fundamentally change the nature of how warfare was waged. Physics did have its time in the sun as a worldbreaker.

But it’s kind of funny how people overlook chemistry. And it’s even funnier (in a disconcerting ha-ha sort of way) how people have turned a blind eye to what we are teaching to children about it.

Physics, I had decided in high school, was a brilliant subject. I liked it. It was practical, and the practicality of the science was easy to see. Hey look, ma! I can discern the height of our school’s clock tower using the length of the shadow on the ground! And of course, we spent a great deal of time dropping objects off the roof, because: science.

When I think back to chemistry, I recall mind-numbing lectures about atoms and covalent and ionic bonds. I hated chemistry then. It took me years to realize that while the mind-numbing part was fundamental to chemistry, we were kept studiously ignorant of the practicalities of chemistry so that we would never attempt anything more elaborate than baking soda volcano experiments.

Chemistry, you see, is dangerous in a way that physics can never be.

It’s also more practical than anything else you’ll learn, because it’s the science of matter itself, and we actually rely on it every day. But most of us are so damned ignorant of how chemistry works, we treat it like magic.

Every aspect of the world today – even politics and international relations – is affected by chemistry. —Linus Pauling

It wasn’t for years after I graduated high school that I realized how much chemistry in school has been neutered. That I understood the practicality of chemistry at all was strictly due to my father, a man who bought potassium nitrate in huge volume so that he could putter away the hours blowing up anthills and making model rockets. And he’s because of him that I understand that we’re deliberately dumbing the chemistry curriculum down.

My father has a colorful history of childhood pranks. I’ve heard years of stories about how he singed off his eyebrows making black powder and made homemade pipe bombs. He once bought me a junior chemistry set and monopolized it for an entire afternoon before declaring it a colorful waste of money. I also once asked him about his homemade smoke-bomb recipe, and he suggested that I not try it out because he was a stupid parent when my siblings and I were young (his words, not mine). Dad learned how to make black powder from his high school chemistry book. It was a different era, for sure.

You can’t learn how to make black powder from a high school chemistry book anymore, and perhaps in some ways that’s a good thing. But there’s a high cost when we begin avoiding subjects entirely because they might be turned to a dangerous purpose like making drugs or explosives.

We are deliberately cultivating ignorance rather than fostering educated morality.

I am still grasping to fill the gaps in my knowledge just with respect to the kitchen–because the kitchen is a place where we do chemistry every day. That’s why molecular gastronomy has become a huge and really interesting new field. I’m afraid about the gaps that are going to be forming in my son’s education because we have made a science a neutered taboo. That’s why we’re watching some documentaries on Netflix this week for spring break, including Hunting the Elements, and spending some time together in the kitchen.

I’m also grateful to the writers who make shows like Breaking Bad, and AMC and Netflix for going out on a limb and showing them, because we get to see science as the double-edged sword that it is in action. We shouldn’t be avoiding these subjects just because they are dangerous, particularly in this day and age where North Americans and women in particular are encouraged to live better lives through chemistry with pharmaceuticals.

I think we should always be aware of the pros and cons when we play god in science. It’s something that Oppenheimer learned the hard way, and after the fact. But we cannot have these educated debates about whether something should and shouldn’t be done if we pretend that they don’t exist, and we can’t even imagine the possibilities and ramifications if we don’t strive to understand them.

The country which is in advance of the rest of the world in chemistry will also be foremost in wealth and in general prosperity. — William Ramsay

What do you think? Should we censor information because we are afraid of what a child could do with it? Or should we instead consider chemistry a dangerous tool, like a stove or a knife, teach safety and morality?