My parsley is pouting.  About a week after I transplanted parsley into a container, it began looking like this.  Weedy, kind of limp, washed out.

The first thing I did was attack my gardening books, but somehow I managed to get only books that don’t really help with troubleshooting beyond pest control and blossom rot.  So I began to look specifically for information on the internet about parsley.

Parsley is a generally good natured plant and usually pretty easygoing.  By the standards of most gardeners, they say parsley can be planted anywhere, treated with casual neglect, and it will do just fine.

So why am I having this problem?

My parsley didn’t make it into the sub irrigated planter.  It’s growing in just a regular ol leftover hanging basket.  It’s in regular, organic potting soil.  I did give it a pinch of slow release fertilizer, but because the soil wasn’t sterile mix, I figured there was plenty of nutrients to be had in the dirt.  I know it doesn’t like being transplanted much, but I kept the taproots undisturbed. I also tried not to water it so much because like many herbs it doesn’t like to be waterlogged.

Well, apparently, parsley does have its kryptonite.  Full sun can be too much for it.  And when on the south side of my deck, unshaded plants have as much as 10 hours of sun a day. 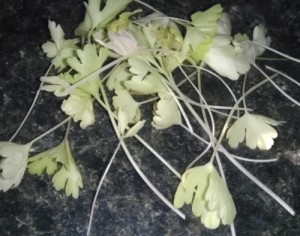 I’ve trimmed about 50% of the plant back, (the yellowed, washed out leaves).  Then I moved the plant between my self-watering planter and my blueberry barrel, so that it’s shaded from the sun during the morning and evening hours.  It seems to be holding its own now, but I’ll be keeping an eye on it.