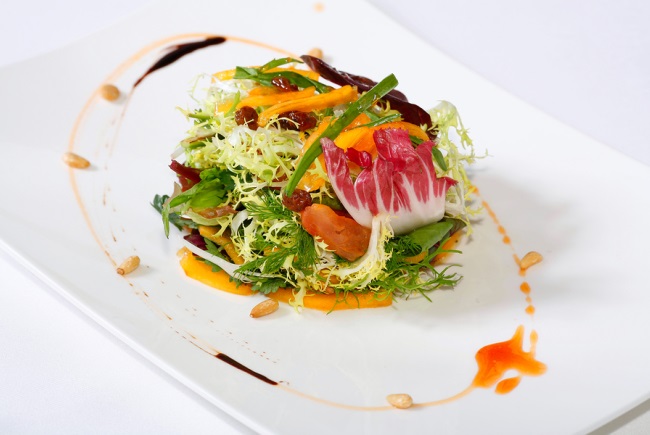 When you work long enough at something, you know how to peek behind the veils of others’ machinations. It’s exactly like finding the wizard spinning the dials behind the curtain in the Emerald City of Oz. So in commercial photography, you stop seeing people’s overexposed-in-heaven food. Instead you start mentally cataloguing things like depth of field, key lighting, and carefully deliberate use of props.

I’m pretty sure Pinterest is officially ruined for me forever–at least from a food appreciation point of view. I keep wondering how long it must have taken to cut all the wax paper with pinking shears and arrange the brownies on the special white staging *just so.*

I argue with myself about whether I’m doing enough fussing with presentation, or whether I’m just being a realist. Food should look yummy. Can’t argue with that. Does spending $25 on blueberries and roses just to artistically crush around two feet of cutting board make food look yummier? I’m not sure.

I think first I’ll worry about investing it in some lighting kits to help keep a more uniform light, instead of stocking my dining room chandelier with 100W bulbs and photographing stuff with my back pressed up against my sliding patio door. Then I’ll debate the issue.

Lately, I’ve developed a true appreciation for Julia Child. I don’t know what took me so long. I think I never really bothered to understand her before. Typical: to not see the similarities when you find yourself too “close” personality-wise, maybe. In some ways, we’re two cuts from the same chicken breast. I, too, came to food late in life. I, too, sort of soldier on, undaunted by failure and lack of training.

Anyway, where I was getting at with Julia, she’s got this funny quote that I haven’t been able to forget–

It’s so beautifully arranged on the plate –
you know someone’s fingers have been all over it.

How true that is.

When I worked as a waitress some decade and a half ago, we called fantabulous arrangement “plating” (a term I’m sure still endures, although there is a considerable range of artistry in definition). And though forks, molds, and squirt bottles come into play occasionally, the best tool for practical and speedy arrangement still is the human hand.

That sprinkle-gob of tender clover sprouts atop your risotto? Courtesy of a thumb and forefinger. The same goes for those pine nuts dropped one at a time on the coulis circled around your salad.

As someone guilty of using a wet thumb and a tissue to remove marks and errant splashes from plates on picture day, I’m over it. Fingers are OK when it’s photography. Practical artistic arrangement for me at family and guest dinners is making sure that stuff isn’t served piled haphazardly atop one another. As my father-in-law once wisely commented over a badly-cut cake: As long as it tastes good, who cares. It all looks the same in the end.

And when I go out to a fancy restaurant, just I hope they wash their hands.

« Chinese Lemon Chicken
Time for a refresh! Maybe in your diet too? – Guest author @Missteenussr »