A true pot roast begins as a densely muscled and tough cut of meat.  This means it usually comes from the chuck, round or rump.  Some diagrams lump “rump” and “round” together, so if you can’t find the rump on a butchering diagram, rest assured, it’s exactly where it sounds like it belongs.

I grew up with bottom round pot roasts, but these days, I usually use the chuck.  It tends to be a little bit lower cost, and I can almost always find one without asking for a special order.  Chuck versions of pot roast go by the names “cross-rib” and “(bottom) blade roasts.”  They can come with and without bones.  There’s not usually a real cost or taste savings in keeping the bone in, at least in my experience.

Whatever the cut you end up with, a pot roast is not a “roast” in the traditional sense, because slow cooking in liquid (braising) is required to break down the tough fiber of the meat.  While you can braise it in the oven, or in a dutch oven on the stovetop “Yankee Pot Roast” style with carrots and potatoes… why?  Why would you want to do such a terrible thing?  As far as I am concerned, the slow cooker was invented just for the pot roast.  You set it up first thing in the morning, set it on low, and come home in the evening after a hard day’s work to that rich meaty smell and a fork-tender roast just waiting for you to throw together some sides.

If that didn’t sell you enough on pot roast, then let me tell you some more.  The other reasons I love it so much?  It is like the King of Leftovers.  It is the Superman of beef.  It can do anything.  Well, except for being dry-roasted (this would be it’s kryptonite).

Don’t waste your time with a tiny roast.  Yeah it’s $5/lb, but who cares?  You will put it to good use for many meals.  The de-fatted leftover cooking liquid makes excellent gravy or beef stew stock.  Leftover meat can be reincarnated as hot or cold sandwiches, Philly cheesesteaks,  pot pies, stew, or casseroles.  Don’t think you can stand a week or two of leftover beef?  No problem.  Freeze the leftover stock in a Tupperware tub or two and shred the meat, bag it, and throw it in the freezer for later quick use.

What is the catch!? You cry.  My friends, the only catch is that depending on the size of your roast, it can take a good 8-9 hours on low and 6-8 hours on high.  Oh and don’t listen to those crazy people who pour Coke on their pot roasts, you want to be versatile!

Thanks, Mom, for teaching me to make this. 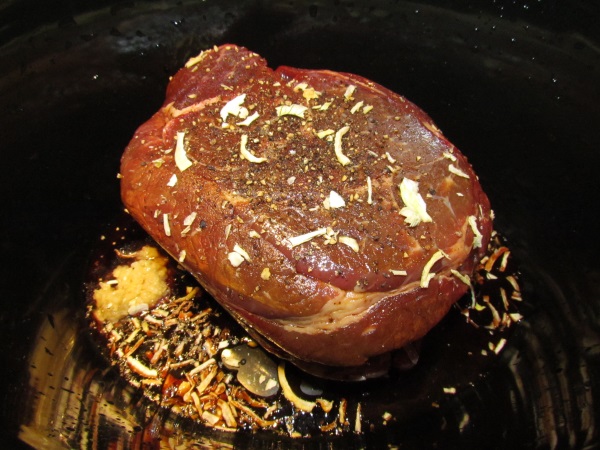 In a large slow-cooker, place your roast.  Add the soy sauce, seasoning, and the wine, if desired.  Add the broth until the roast is completely covered in liquid.  If you use the entire box of broth and the roast is not entirely submerged, top it off with water.

Put the lid on and cook on low for 8-9 hours, or 6-8 hours on high, or until fork tender and shreddable.  Remove roast with a slotted spoon (it will likely be falling apart).

To make gravy: ladle a few scoops of the liquid into a saucepan.  Spoon any excess grease off the top.  Taste-test the broth.  You may want to add a little water or diluted broth if it seems a little salty.  Heat the saucepan on medium until the liquid boils.  Reduce heat slightly to a simmer.

In a small cup, make a slurry of 1 tablespoon cornstarch: 1 tablespoon water per approximate cup of liquid to thicken.  Stir until it forms a smooth paste.  Whisk the slurry into the beef broth, stirring quickly to ensure that the slurry doesn’t congeal as lumps.  Thickening will happen nearly instantly.  Allow gravy to simmer for 1-2 minutes, stirring occasionally, until the starchy taste has been cooked away.  Beware of excessive boiling, as it will break down the starch and cause the gravy to thin out again.