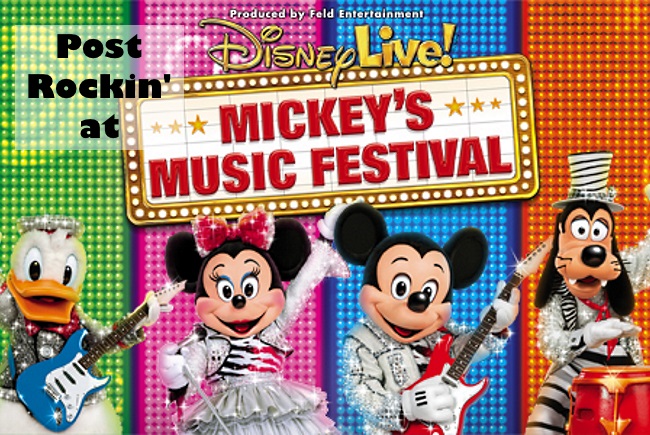 Being an only child, my son will miss out on some of the things that I took in stride as part of growing up, like being fourteen and having to watch the (then) newly-released Little Mermaid VHS tape over and over with my three year old half sister until the tape wore out and took the VHS machine with it. She demanded that we watch that movie so often that we used to watch it on mute and do the voice acting ourselves.

I happen to still be able to quote about half of the movie, word-for-word, from memory. I don’t remember what I ate for lunch yesterday. Go figure.

Kidlet was sick the day his school went to go see Anne of Green Gables at Theatre Aquarius here in Hamilton, so Mickey’s Music Festival was a good opportunity to introduce him to musical theatre. Without a younger influence in the household, it was with great skepticism that my kid finally agreed to come see the show, since (at a worldly six years old) he believes that Mickey Mouse is for smaller kids.

But don’t worry, Disney; while my son is no longer enchanté with Mickey, you’re in no danger of being out of market share here. I’ve got two rabid Star Wars fiends foaming at the mouth over the recently released teaser trailer.

When the show began, he was cross and busy pretending he was having a lousy time, right up until Aladdin. As the acrobatics began, with Aladdin and the others flipping and cartwheeling, he loosened up. His jaw dropped, and I saw the spark: the newly-forming adult appreciation for the illusion and skill in performance art.

Younger children will obviously enjoy the spectacle for what it is: their favorite Disney characters in person, playing music and singing and dancing; and by all accounts it was a rousing success with the 3-5 age range and their parents. But the older kids can get something out of it, too. My son realized that these were real people with honed skills working in tight, beautiful choreography to create magic that he could watch–something he’s never been able to observe in a movie or a TV show.

Watching kidlet enjoy his first musical theatre sent me flashing back to one of my earliest… which was Peter Pan. I knew that the woman playing Peter Pan was an actress and she couldn’t really fly. I had been given a backstage tour with our class where we got to see the harness mechanism that would send her soaring over the audience. And yet, when everything worked in concert, it still felt like real magic.

Perhaps one day, later, he will observe and admire the finer, hidden arts of the craft as I did–like the way one person would casually step close enough to release the brake on the staging, while another would slide it out to extend it–movements so subtle that unless you’re watching closely, you could miss them entirely. Maybe one day I will take him, as my grandmother took me, to see Phantom of the Opera and Carousel and maybe even be a groundling watching an all-male cast perform a Shakespearean play at the reconstructed Globe Theatre in England.

But for now it was enough that he ended up having a great time watching a masterfully performed musical.