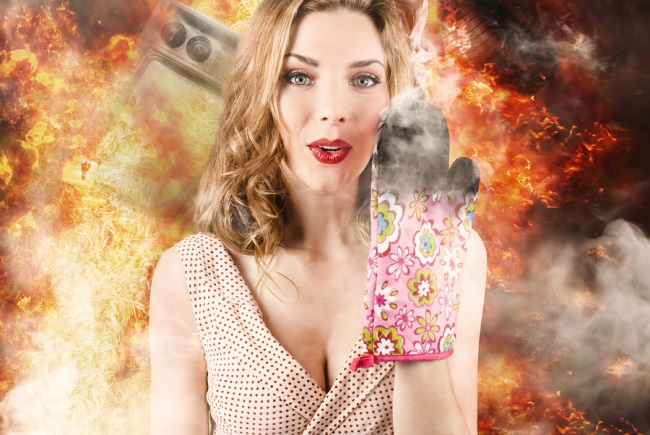 It was the best of days, it was the worst of days. It was the day I came to terms with the fact that my kitchen hates me.

Let’s face it. Not everyone was born to be a rock star in the kitchen. And when I say “not everyone” I mean me. If you follow my #KitchenFail adventures – either on the blog or on Facebook – you know that on the day the gods-that-be were giving out culinary skills, I was standing over in some other line. Probably eating take-out.

Over the years I’ve managed to ruin frozen pizza and even bring new meaning to the word “disgusting” by accidentally inventing a newfangled way of cooking turkey (did I mention “by accident”?). Also, I was a little surprised that no one reported me to child welfare when I managed to turn my kids off of an old-time favourite: the grilled cheese sandwich. Oh and if you thought that “burnt” AND “undercooked” at the same time wasn’t a thing, you’ve never been to my house for dinner.

Last summer my daughter even made a poster that said, “Mom is no longer allowed in the kitchen by herself.” She was 13 at the time.

The confusing part is that I come from a long line of great cooks. On more than one occasion, my mother has had to come over to “fix” dinner. This is why we live down the street from each other. And as she enters my house, usually full of smoke and with the fire alarm blaring (my house, not my mom), there’s always one question that she can’t resist asking out loud:

“Are you SURE you’re not adopted?”

It’s not like I don’t try. I LOVE pouring over recipe books and browsing amazing food blogs (FoodRetro is one of my faves!). But every single time I roll up my sleeves and say to myself, “this time I’m going to get it right,” something ALWAYS happens.

Like the time I made a chocolate cake and forgot to add the chocolate. And while I was all, “It’s okay. It’s a vanilla cake.” My neighbour was quick to remind me that “even vanilla is a flavor.”

Or the time that I was making cheesecake and my food processor committed suicide, leaving me with a truckload of goop. Possibly not unlike the paste they used for wallpaper in the 1600s.

In my defense though, there are kitchen idioms that I’m certain were invented just to confuse the culinary challenged. (Because I can’t possibly be the only one in this entire world that suffers from a disability in the kitchen.)

Well, let’s start with “the cup”. How was I supposed to know that one cup does not equate to any old cup?

Or that baking soda isn’t just for whitening your teeth?

Or that chickens come with baggage and that said baggage is supposed to be removed BEFORE cooking.

But of course there’s a positive spin to all this. All of my kids (I have four) are great in the kitchen. Maybe it was a matter of survival but my kids have been able to whip up a box of Kraft Dinner like nobody’s business since they were toddlers. And no one makes broccoli casserole and pork tenderloins like my second eldest daughter.

So although I’m a classic case of genes skipping a generation, clearly the kitchen gods knew all along what they were doing when they bestowed me with this disability. Because not everyone was born to be a rock star in the kitchen.

Mona Andrei can be found comedy and life blogging from behind a pile of takeout boxes over at Moxie-Dude and kindly offered to share some of her funny while I was on vacation. It’s probably a fortunate thing for Mona that she’s so far away from me, because I’d take her under my wing and attempt to make her a special series on Food Retro: proof that anyone can learn to cook. 😀