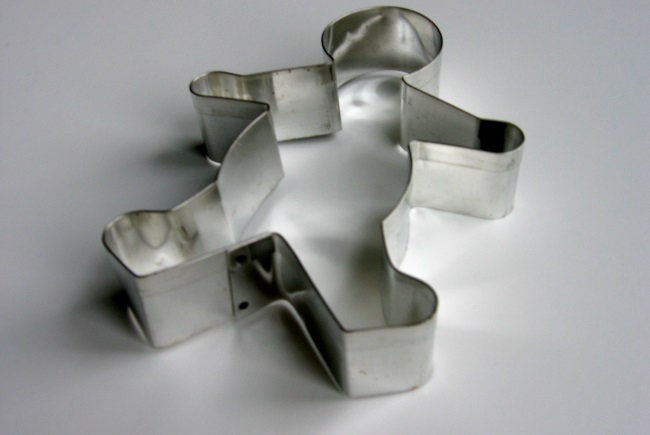 It was a cold day in December, and I had glorious visions of bonding with my three year old son over the time-honoured traditions of Christmas cookie-making. We were bent over the rolled out dough. Flour gently dusted everything. His little fingers oh-so-carefully lifted the gingerbread man we just cut and set it on the cookie sheet with the others. In his little baby-boy voice, he called them ‘man-men.’

It was just the cutest thing ever.

Norman Rockwell had nothing on me; I was the modern image of familial bliss, orchestrated to absolute perfection.

As I picked up the full cookie sheet and slid it into the hot oven, a horrified shriek split the air. My head whipped around to lock eyes with a wide-eyed and traumatized toddler. “You are KILLING my MAN-MEN!” he wailed, and then he ran from the kitchen, sobbing inconsolably.

As my dreams for the perfect mother-son evening came crashing down, I’m not sure what sort of picture I cut at that moment. I have visions that I must have been the Betty Crocker version of Freddy Krueger: crazy-eyed, covered with flour, clutching a spatula. In retrospect, I had told him to be careful of the oven, but I never would have guessed that baking cookies could end in tears and terror. Nope. Never. Not in a million years.

Life is not a Norman Rockwell painting. Check.

You should know I consider myself a logical person. Even during the worst, most epic bouts of PMS when I’m crying for no apparent reason, answering “nothing is wrong” never crosses my mind. I’m the sort of woman that shouts: “I’m having mood swings because of hormones! I know it’s not rational, but it’s still your fault I’m crying because you won’t just tell me what you want for dinner instead of saying ‘whatever you feel like,’ you [explicative removed]!”

Motherhood has been a constant source of surprise to me. How could it not be? Childhood experiences are not always logical. It is drama, comedy, irrationality and surprising moments of comprehension all in one. At any moment, I have to reconcile the boy wearing Hot-Wheels underpants on his head with the toddler-adult that agrees with me that Barney the Dinosaur “is a little bit evil” but has educational merits.

Sometimes I have trouble keeping up.

Confession: I’m also a bit of a control freak. I have trust issues. To have things both out of my control and in chaos is my 9th circle of Hell. In my private, shameful moments, I know I am guilty of trying to control my son, change him, whenever I feel he deviates too far from “normal.” I’m guilty of trying to conduct his life and experiences a little bit.

Sometimes, though, he holds his own against me. One day downtown I told him to hike his pants up—he’s a skinny kid. Instead, he did the opposite. Cars honked, people on the sidewalk laughed. Yup, he had dropped his drawers and underwear right to the pavement, flashed a cocky grin and asked me, “Like this?”

That sense of joy, wonder and mischief is an awesome thing to observe. These flashes of independence, they’re like a glimpse into the future of the person he might become. It’s just another tough thing to reconcile: this future, strong-willed, independent man with the little boy who still likes to snuggle during story time.

Ever since the ‘Cookie Incident,’ I’ve stopped expecting perfect scenarios in life. Well, I’m trying to, anyway. Looking back over five years, I’ve found that real life, raw and unedited, is so much more interesting. The unexpected makes better memories. Chaos makes a better story.

That’s the biggest surprise to me of all.