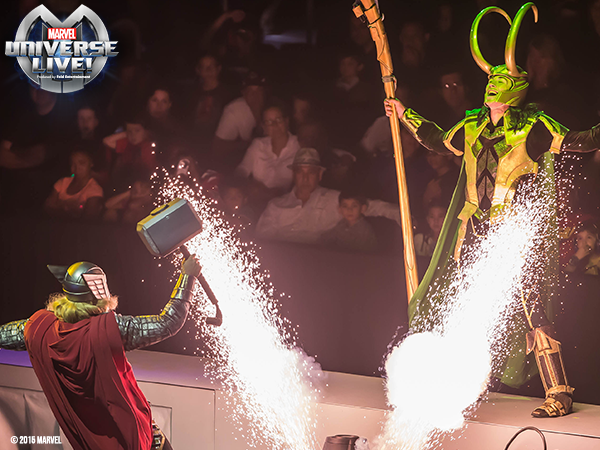 Let me start out by saying I’m not too bright sometimes. I knew that there were going to be pyrotechnics and motorcycles in Marvel Universe Live. I brought ear protection for Monster Jam, cause monster trucks. Duh. Why it didn’t occur to me to bring ear protection for this, I’m not quite sure. As a result, hubs and I were wincing after Thor “landed” on stage.

Be smarter than me. Bring earplugs for the whole family.

Anyhow, that little hiccup aside, I think this is the most fun I’ve had at a live theatre event in almost two decades. Even before the show started, once I got a good gander at the HUGE rig/track/staging/catwalk suspended over the floor, I was pretty impressed. Of course, that’s geek-me talking; once upon a time I actually knew the suspension load of First Ontario Centre cause I did occasional work there. Not that my team ever worried about much besides some drapery and lighting. This thing transcended the definition of rig and entered into the realm of colossal construct. The tech geeks in your family will have eyeball strain from trying to keep one eye on the ceiling and the other on the floor.

I don’t even really have to mention the kids, do I? I asked kidlet if he was having fun, and his buddy that we brought along to the show too. I’m pretty sure neither one heard me; they were slack-jawed, eyeballs locked forward, and totally in the zone. Kidlet did close his mouth periodically to yell “PICTURES! TAKE PICTURES!” at me.

I was kind of worried that after all the awesome motorcycle stunts we saw the heroes perform, he’d be wanting a dirt bike. Heck, who could blame him? I kind of wanted a dirt bike.

Dodged a bullet. He just asked about taking gymnastics. I guess he was more impressed by Spiderman. Whew.

Anyhow! Do you like the Marvel movies? Want to impress the heck out of the kids? Have a comic book nerd in the household? Go see this. They’re in Hamilton for a couple days more, then moving to Toronto, then onwards to Montreal. Don’t forget I’ve got a 20% off coupon code on select performances: MULOC.

Photos used with permission from Feld and Marvel.