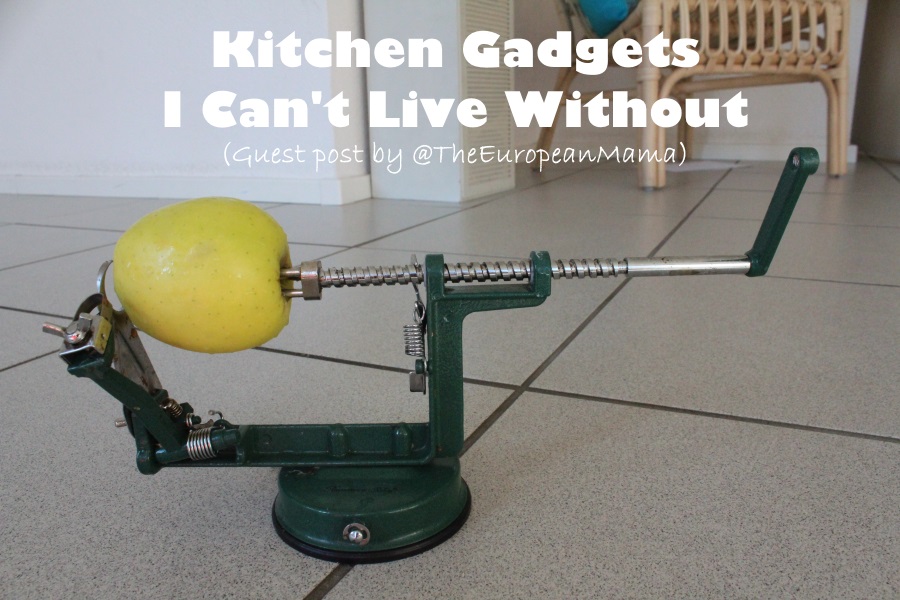 For a long time, we lived in rented apartments so I used what was available, but once we moved to our own home, I’ve started buying all the necessary and less-necessary stuff. Over the years, I’ve realized that there are kitchen gadgets that I absolutely love and wouldn’t want to live without.

1) The bread maker – I live in the Netherlands where bread consists of plastic and air. I like my bread heavier, with a nice helping of seeds for more texture, but such bread is hard to come by here. So I have started making it myself, first by hand, and then my mother in law gave me a bread machine. I love it and have been using it ever since, either for making bread or brioche or to help the dough raise better so that I can form and bake it later on. I’m experimenting a little, adding various flours and trying the different programs. So far we’re very happy.

2) The yogurt machine – I don’t need a yogurt machine to make yogurt at home. But I got one from my father and I rarely buy yogurt these days because the one I make is so much better. The kids love it and I make a new batch every 3-4 days. Besides, my model comes with really cute little jars, so I can adapt the quantities easily. Looks pretty, too!

3) Hand mixer and blender – I once bought one of these fancy kitchen machines. It worked really well until I tried to make banana chamomile smoothie and the bottom of the thing came off. The whole smoothie was ruined. I was so traumatized by the experience that I quickly came back to my trusted friends, the hand mixer and the hand blender. They take up less space in the kitchen, are faster to use, have less parts to clean and even though they were never fancy models, they work well.

4) My very special big pots – I have acquired two new pots I love. One is a pressure cooker that my MIL gave me. I don’t use the pressure function, but when it comes to making large quantities of soup, it can’t be beaten. It is by far the largest pot I own. But when I want to make a stew, I make it in my beautiful orange Le Creseut Dutch oven. I am love with this sturdy little pot (although let’s face it, it isn’t really so little). I recently made duck stew with olives and it was much better made in that pot.

5) This apple slicer/peeler/core remover – This thing is genius. It needs no electricity (which makes its status as a gadget somewhat suspicious), but it is absolutely amazing because it does three things at once: it removes the core, peels the apple and then it slices it into thin slices. I use it to make apple pie, apple sauce, apple crumble and pretty much apple anything that requires apples to be sliced or cut. If used correctly, it is much faster than doing it by hand.

6) The herb scissor – Another gift from my MIL. At first I thought there were useless, but I soon came round. In fact, I even bought a new one when I thought that the first one got lost. And now I use my herb scissors for cutting herbs, of course. And sometimes, my children use it for arts and crafts. It looks kind of cool, with it’s green/yellow colour and the funny blades. Yes, I need herb scissors and you do, too.

7) Cups and scales – I didn’t have a scale for a long time. Instead, I learned to measure everything in cups and spoons. I didn’t feel I needed scales. But then I got them from a friend and then I discovered the joys of exactness. If I wanted, I could measure precisely 467g of flour, or 502 instead of having to approximate. But then of course, with a scale there is no reason for approximation and so now I can measure out exactly whatever amount I need.

8) Dish washer – Cooking is awesome but it is messy. And of all household appliances, the dish washer is the most epic: less work, more fun. The only thing you have to do it to put everything into the machine and then press a button or two. And wait. But once you’re done, your dishes are clean and you can focus on your next kitchen experiment without focusing on the mess.

9) My laptop – Not entirely a kitchen gadget, but let’s face it, even I with my kitchen experience, need help from all the wise people on the Internet sometimes. For example, who else would show me how to cut a pineapple (why is it not called an Ananas like in all the other languages? It’s neither an apple nor does it come from a pine???), or how to roll croissants? And where else would I find all these great recipes that I would totally ignore later on and make my own thing anyway? Seriously, cooking anything without the Internet would be very hard and boring.

10) A proper oven – This is the one thing I actually have to live without but I can’t say I am happy about it. You see, in the Netherlands spaces are scarce so most houses don’t have a proper oven anymore. Instead, they have this tiny thing that serves as both oven and microwave. For our family it is fine, as we rarely have guests and the kids are still little and their food consumption fits their size, but it won’t be like this for long. And I wish I’d have a huge proper oven to make lots of delicious, fabulous food in it. Not yet, but maybe one day…

OK it’s your turn now- tell me what kitchen gadgets you can’t live without?