Grumpy cat is how I feel right now.  I’m about a week behind where I want to be with my garden project, but the weather and other forces are conspiring against me.  And my little girly arms.  I think after I get this done, I’m going to start pumping some iron.

But!  I’ve got an update, and a car load of stuff.  I’m down to the final couple of steps of the planter project (see Time to grow!)  I’ve got a car load of soil, and I just need to put a hole in for the drainage and feeding pipe.

Before I go into pretty pictures though, my two cents worth on this whole project:

This project has also turned out to be a bit more costly than I was expecting.  I spent about $240 on wood (mostly in the cedar), and that was OK.  But then the liner was about $130.  And the various constituents of the potting mix and slow release fertilizer came to be about $130.  I know this seems to be a lot for dirt, but everyone agrees, you can’t put regular potting mix in a self-watering container.  Also, the interior dimensions are about 6′ x 3′ x 16″, less the volume of the drainage pipe inside.  By my calculations, I need about 110 gallons of mix by volume.

So I’m a little bit discouraged, because even at supermarket prices I could buy a lot of organic for $500.  Still, the saving money isn’t the whole point of the exercise either… I’m learning technical skills in the bargain, and I will have a nice planter that will survive many years.  If my attempts this year are fruitful (badum ching) it won’t take very long to recoup.  Someone far more skilled at gardening than I could probably break even in a year by succession planting.

But… if you have the space to put stuff in the ground, it’s definitely cheaper that way! 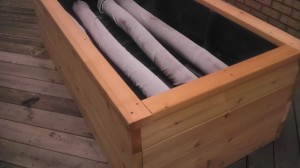