You may have already seen that hot dogs are on my general naughty list because milk is frequently included as an ingredient. Let’s face it, in commercial food production, the average cheapo hot dog is one step above pet food.  We’re talking discard “meats” and fats and scraps and mechanically separated stuff.  When you’re dealing with low grade, you gotta flavor it, and milk products and derivatives is one of those ways.

As long as you don’t have a milk allergy like my son, flavoring with milk products is probably one of the better options.  Scary, eh?  Behold: 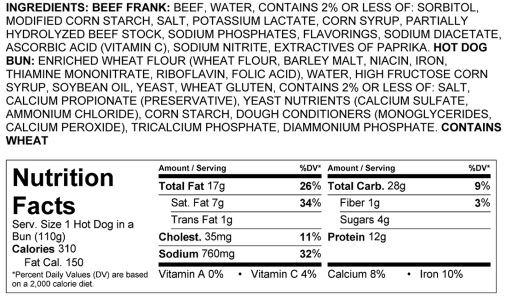 If the first thing that crosses your mind is “I don’t even know what most of this is” that’s a good alarm bell to have.  Even the size of the list is kind of alarming.  How much crap do they really have to add to your hot dog… and why?

Let’s let the power of the internet weigh in.

And lest ye think I’m picking on hot dogs, well, the truth is that if you eat fast food, or buy frozen chicken tenders and hors d’ouvres and anything not made at a local bakery, this stuff is no stranger to your food.  What I can promise you if you stay out of the ready-made items at the grocery store,  you’re a lot less likely to see them.

« BBQ Season Incoming
The Problem with May »