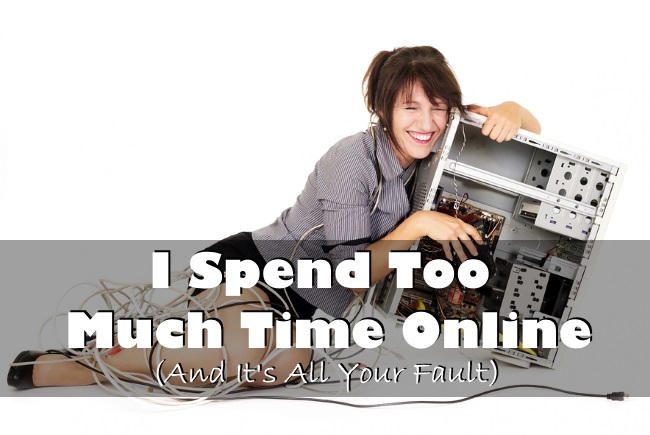 It’s summer. I should be off doing summer-y things. And sometimes I do, but being a WAHM doesn’t quit for the summer, if you know what I’m sayin’. While my dear son is home from school, however, I find that all my online activities have to work with the attention span of a 5 year old, who comes and bothers me every 32 seconds during “quiet time” with Legos that have to be pulled apart (Lego, you really need a mom hack tool for this other than my now-badly-splintered fingernails).

SO instead of having a blessed 20 minutes to concentrate on researching fermentation, I find that I doodle online waiting for the next interruption. Some of this is all you guys’ fault, because you guys put so much fabulous stuff on the internet that just works with the summer WAHM/SAHM conundrum. And then I realize that except for going to the park a couple hours, I’ve spent half a day online and gotten absolutely nothing done.

Here’s some of my favorite ways you guys kill my productivity:

So now the internet is for cat pictures. Everybody loves cats. If you don’t believe me, go read Reddit.

I was looking for the modern-day equivalent of math blaster or something educational to put my kid onto during a rainy day. Forget Farmville, I discovered 3rd World Farmer! It’s much more interesting to play when I’ve got civil wars, poachers, and 1st world economic collapses  to deal with. And then I discovered that someone created an Apple IIe web emulator plugin and has a site with a ton of the old games.

That’s when I lost about three days to the Oregon Trail. I dislike Facebook for a lot of things, but it’s where all my virtual community hangs out. Unless you get a babysitter for everyone, real life friend interaction at this stage kind of sucks. You’re lucky if you can manage an ongoing discussion, and because it has to somehow work with the attention spans of toddlers, it’s likely to be broken up with awkward silences and a lot of chatting about kids. So Facebook is now my preferred form of social interaction, mostly because I can have conversations where, while there might be a time delay, I can type a complete sentence.

Most people don’t realize how magical YouTube is. When I’m having a particularly challenging day, I play a game where I type in two random words into the search window. There is always, ALWAYS, a video about it. No matter what two words I choose, humanity and YouTube has never failed me yet.

Don’t believe me? Here’s exploding dinosaurs set to the 1812 overture.

Last but not least… Other people’s blogs

I know a ton of funny people, and a great chunk of them are sisters in arms over at BLUNTmoms. They might be just a little bit troll-ey too, just like I have a tendency to be. Needless to say, I feel right at home. Real life is frickin’ hilarious if you have the right spin on it.

Of course, they don’t leave all their good stuff on BLUNTmoms alone, they have their own blogs too, and so I wander from site to site, coveting my own mug with the tiny vulgar unicorn, wondering who I have to bribe to get some loving from the brands I’d love to work with, and snickering over other people’s hilarious misfortunes and experiences, like 1975’s recent surgical escapades.

I can’t be alone in the art of procrastination. How do you guys prefer to waste your time?