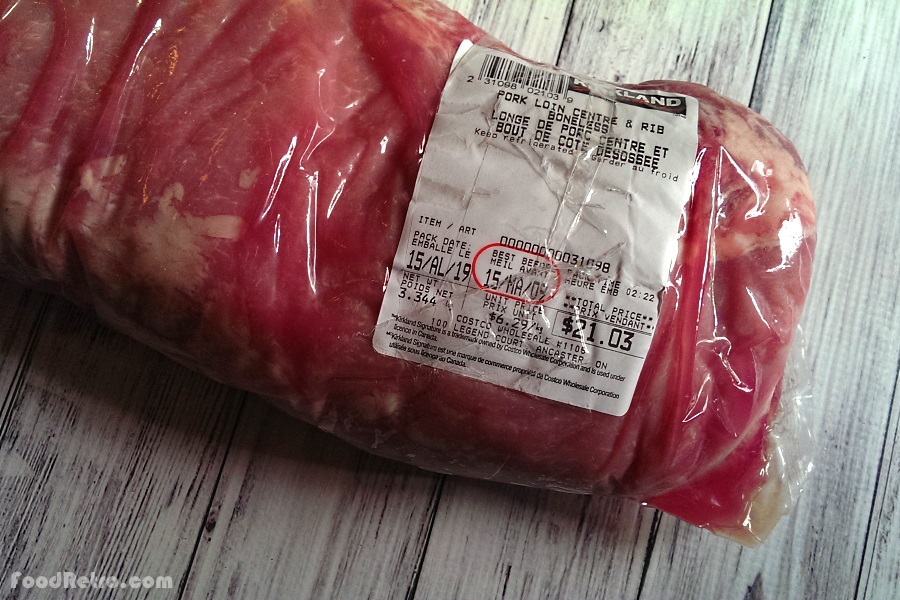 Bulk buyers beware: bigger is not always better. Costco can be a source of excellent deals–if you’re disciplined, know exactly what you’re looking for, and have a good feel for the pricing of products. Ground beef, for example, is seldom cheapest to buy at Costco. A Costco pork loin, however, is usually a pretty good deal in more ways than one, even if all you ever do is make pork chops out of it.

Butchering a piece of meat can be an intimidating process if you’ve never tried it before, but fear not, my friends: the pork loin is the perfect beginner piece. They’re straightforward; boneless; not too large; and at about $20-$30 per loin, they’re pretty cheap, so you don’t have to feel too terrible if you make a hash of it your first go around.

The boneless loins that you find vacuum sealed in the meat section at Costco have been stripped of both bone and the tenderloin that sits on the other side of the bone, and it usually has also had the “sirloin” part removed if the loin you purchased is smaller than 10 lbs (as mine has had it removed).

What’s left afterwards is often called the center loin or center loin and rib, mostly a very lean cut of meat with a fatty edge that can (and should) be left on. If the sirloin were still attached on mine, it would be on the opposite end from the rib.

The tapered end of the loin is where it used to be attached to the ribs. It’s made up of two large muscle groupings that make it easy to identify: the lean, pale one similar to the majority of the loin, and a darker, more tender red one (see below). Between the two is a marbled layer of fat, and on this end is sometimes a layer called “silverskin,” a tough, thready-looking membrane that should be removed. 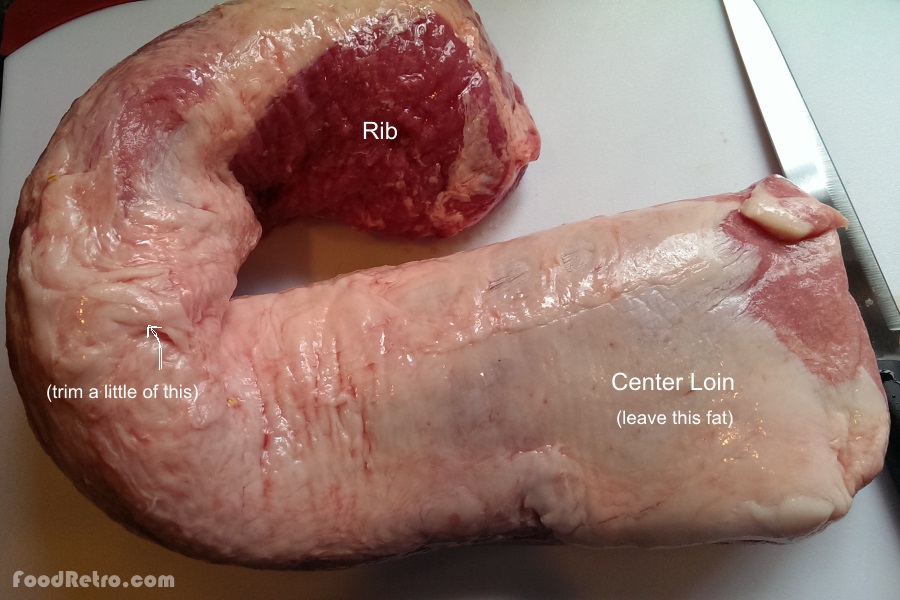 The whole center loin, cut in various parts, makes for a large variety of possible cuts. You can cut roasts and chops from either part, stir fry cubes or strips, and stuffable “steaks” from the lean.

The rib end contains some of the muscles that, on the whole animal, becomes part of the pork butt (which is actually the shoulder). Chops cut from this side are often called “ribeye,” but personally, I don’t favour the texture and marbling of the ribeye in a pork chop, so usually I will cube this meat for a pound of stir fries and stew. The darker meat cut from this end does well in braising and moist cooking.

What you need: A very large cutting board, and a very sharp, non-serrated knife. Oh and lots of freezer-friendly bags or paper.

You don’t have to have an expensive, fancy-shmancy butcher knife. When I worked in hospitality, the kitchen staff preferred ordinary Canadian Tire knives for butchering. This is my personal favourite knife right here: the Wiltshire StaySharp Carving Knife – Black Scabbard

. Well, OK, mine has a white scabbard, but you get the picture. It’s like $30, and it is self-sharpening simply by sliding it in and out of the scabbard.

How to go about it:

Open the vacuum sealed bag and let the pork loin drain. Beginning at the widest end, fat side up, start with your preferred premium cuts like roasts. I usually take only one roast from a loin (8-10″ long, about 2.2-2.5lbs), as we prefer to have pork chops.

Continue down, cutting to your width preference; I recommend no less than about 3/4 inch for chops. You should have to do very little trimming. I got about (14) 3/4″ inch chops from the roast cut to where I stopped because of the rib eye.

If you’re not going to continue cutting roasts or chops once you get to to the rib section, this is where it gets a little trickier… but not too much. If cubing, you may want to sever the two muscle groupings and remove the silverskin. I’ve found that this is easiest if you press your fingertips into the darker colored muscle right at the edge of the marble line, and with a delicate sawing of the knife, pulling the two apart. You’ll be left with the fatty meat section and the lean meat (fairly easily dealt with). Continue removing fat and silverskin by pulling it up lightly and gently slicing. It doesn’t take much to remove. 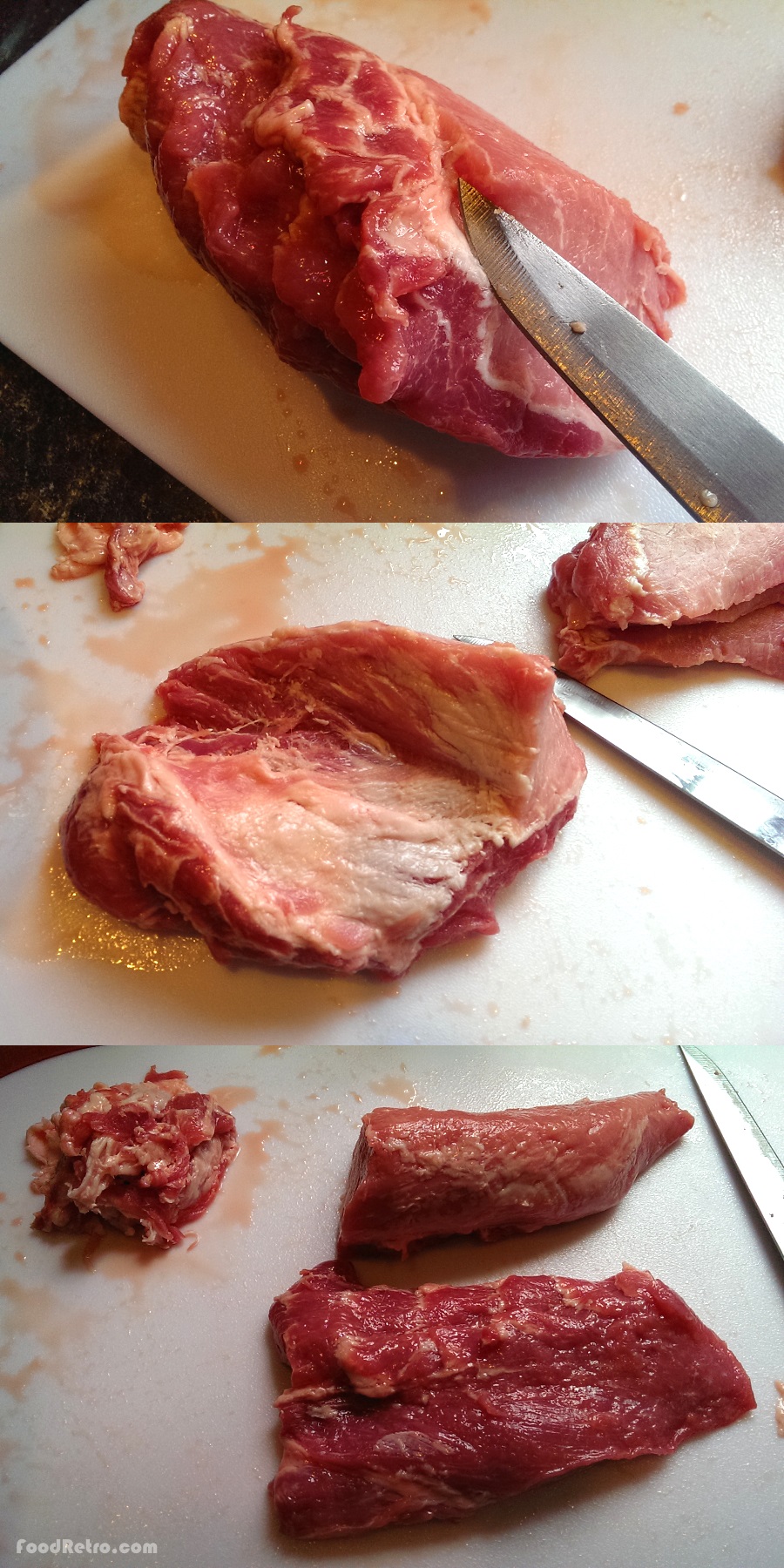 Once you have the two parts separated, you can chop them as you wish. I like to mix the two together for fairly lean but flavourful stewing meat.

As you can see, there’s only a small pile of scrap at the end of butchering (out of over 7.3lbs of pork loin, there was less than a quarter pound of scrap). Very little trimming has to be done until you reach the rib. You can compost or discard, if you like, but even this can be kept in the freezer for flavoring stock.

Once you’ve finished, package up your largesse in freezer paper, vacuum seal, or my favourite: freezer bags (I tend to use up meat fairly quickly). If using bags or vacuum seal, you can also freeze the meat with your marinade of choice.

This is roughly how I prefer to divvy up my pork loin if I’m only buying one. If I had a second, I would cut more roasts and stew meat. But you can see from a $21 dollar loin, I got one roast, 14 3/4″ pork chops (about 4 oz each), and a pound of cubed meat. At about $.18 cents an ounce / $.45 cents a serving, it’s a pretty decent deal when other meat cannot be found on sale. 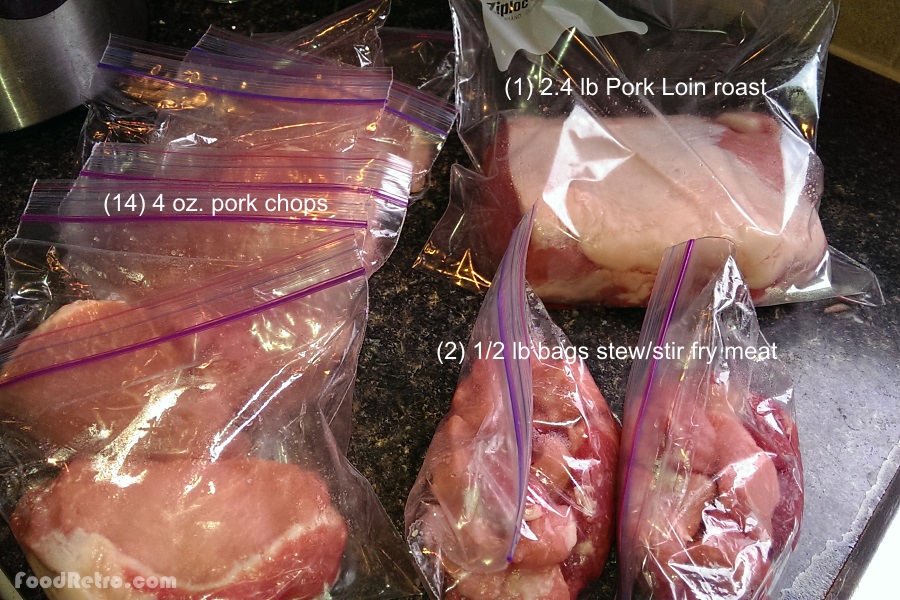