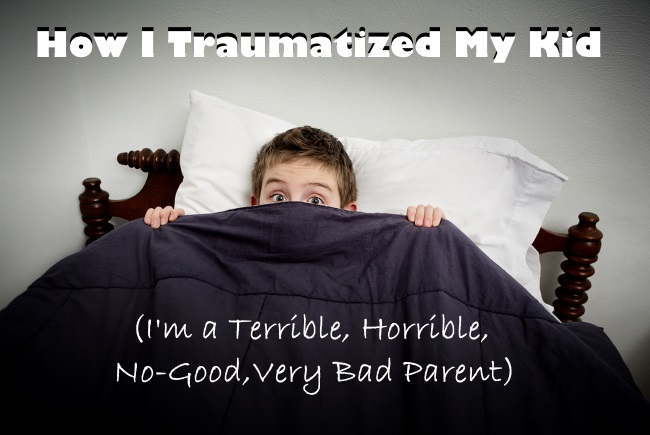 Hey parents: not all PG-13s movies are rated alike.

Just sayin’. This is foreshadowing, here.

We had watched Pirates of the Caribbean on Netflix some time ago, and my then-five-year-old took that particular PG-13 movie quite well. He proceeded to watch it another 38,962 times, and made us go to the Pirate Museum in St. Augustine, Florida, before we set foot anywhere else, including the Castillo de San Marcos right across the street. He forced his parental wallets to shell out for a cheap plastic souvenir saber and a pirate hat. Then he proceeded to pose by every cannon he could find (there are a lot of old cannons in St. Augustine) and shouted, “I’m Captain Jack Sparrow!”

I have a ginormous DVD collection, as a proper former film student ought. It’s all cataloged and organized by genre. In fact, people used to treat me like Blockbuster when Blockbuster first folded years ago. This has since changed since Netflix Canada got a much better selection, including a fair portion of my old DVD collection. But I digress…

It was clear at the time he had a love of adventure and fantasy, because it was shortly after that we introduced him to the Lord of the Rings Trilogy, extended edition, from my collection, and he sat through every single one. He was so glued to the chair that he didn’t even get out of his chair to stage a mock sword battle. This is, in and of itself, completely amazing, because I’m pretty sure the only way to keep a five year old in a chair through an entire movie is to use a five-point harness.

We have since watched the Lord of the Rings Trilogy about 4,329 times, but only cause, collectively, it’s about 9 times as long as Pirates of the Caribbean.

We needed some new material.

So I was thumbing through possibilities from the collection and thought, Jurassic Park! This will be a good one. It’s only PG-13 and I don’t remember it being that scary. Well, let me tell you, parental units: just about every movie from your past is about 100 times more scary and/or gory than your brain recollects.  Indiana Jones is a really good example of this rule too, considering there was a pile of bodies before the movie hit the five minute mark.

Kidlet is sitting there, during the T-Rex scene, with eyes as wide as saucers.

“My roar is the combined sounds of an elephant, tiger, and alligator!”

He looks over at us like the victim of a natural disaster.

Okay, that’s enough Jurassic Park for the next 10 years. Back to Netflix.

We ended our night watching a nice, safe, PG kid’s movie, The Adventures of Mickey Matson and the Copperhead Treasure, specifically, which won’t get any ringing endorsements from me even though it did have Christopher Plumber in it, and he’s cool. But it did entertain well enough, and what more can you ask for a movie?

Maybe next week we’ll try Goonies for our Adventure fix. There’s only swear words in it…