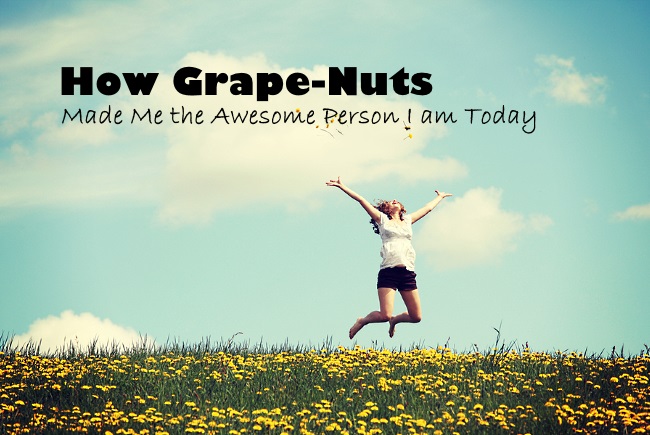 Disclaimer: Post Foods has paid me no compensation; my mom thinks this story is hilarious.

I was actually a good cook long before I had a son with food allergies (or at least, nobody has yet complained). Relatives who hate cooking mooch off me during the holidays (I like cooking so I don’t mind). I used my l33t skills in the dorm at university to get out of other chores I hated like dishes and cleaning the bathroom. I even used to help my mom when she sold baked goods to coffee shops and all.

But before that (like way, way, way before that), when I was still slobber-myself toddler-sized and it was something like 1982, mom fostered my interest in cooking by putting me on the counter-top while she made supper.

Or so I like to tell people. Of course, I’m sure it was less about teaching me how to be an awesome good cook, and more about keeping me out of mischief and in line of sight. Mom likes to joke about how the playpen was useless for keeping us in. Apparently, play pens in the early 80s were only useful for putting the Christmas tree in to keep us and the cats out.

Like cats, apparently if you stuck me in a high spot where I could see what was going on, I would remain relatively stationary. So one day, I was sitting on the counter, minding my own business. Mom was making a salad, and I was feeling helpful. Or perhaps I was just unimpressed by the quantities of vegetables. I don’t know.

Within my reach was a box of Grape Nuts cereal. Do you remember this stuff? I don’t think I’ve had a box for almost 30 years, and I can still feel the texture of it in my mouth.

So naturally, since I saw mom dumping other stuff into the bowl, I thought I’d contribute. I reached over, grabbed the box, and upended it on the cereal, freaking my mom out.

I actually recall this event, by the way.

We weren’t poor, but my mom’s an old farm-raised gal, and you know how they feel about throwing out food. She made some effort to separate the salad from the Grape Nuts, but all she was able to accomplish was to make it so that we were eating Grape Nuts with our salad instead of salad with our Grape Nuts.

Amazingly enough, it was a huge success anyway.

Remember, this was 1982, years before Post actively began to promote using Grape Nuts as a salad topping. I did it first (not that I can prove this conclusively, but I’m taking credit anyway).

So there you go: I was a content creator at an early age.