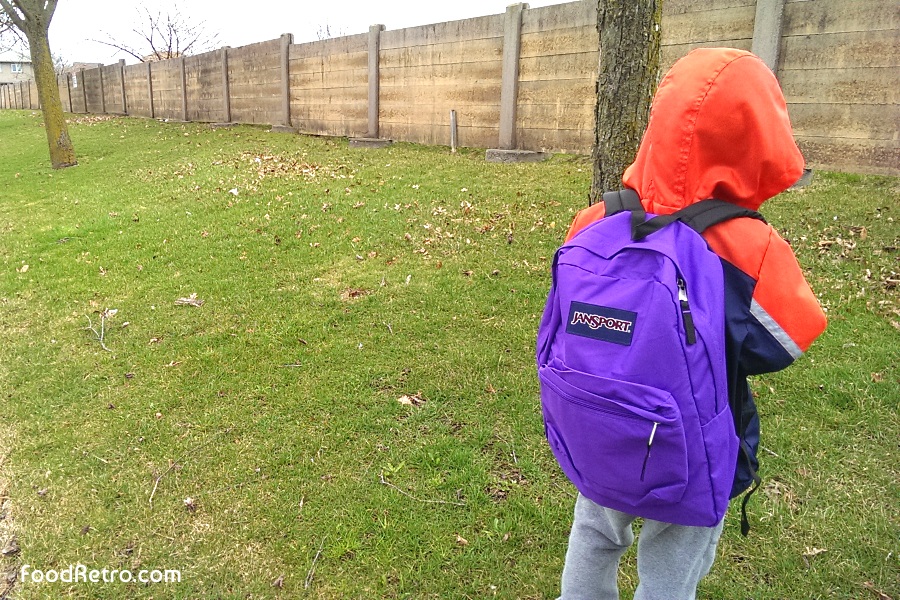 The look on my six-year-old’s face let me know that it wasn’t a good day.

Unfortunately, I also had an idea what might be wrong.

You see, I was recently gifted a brand new Jansport backpack. A lovely, bright purple backpack. It was part of a promotional package for the Netflix show The Unbreakable Kimmy Schmidt, a technicolored “dark” comedy series about a 30-year-old woman who had been kidnapped and trapped for 15 years in an underground bunker, now trying to make her way in modern New York City.

Because no sane carless Canadian leaves home to go frolick in 4 degree celcius weather with hail and 30km/hr gusts, it was sitting in my hall closet, awaiting biking weather… until this day.

My son took a shine to the purple backpack.

He’s never been a fan of the traditional “boy” blue, or even green; in fact, the more brilliant a colour is, the better he likes it. According to him, the three nicest colours in the spectrum are red, orange, and yellow, and if he could put together an outfit with just those three colours, he’d wear it out in public. No shame.

This day he was shamed. All throughout this day, he was badgered by kids. On the bus. On the playground. In the hallway. Classmates. Friends. Boys.

My son had a “girly” backpack, and they made sure he knew it. These boys–who wear pink t-shirts to celebrate anti-bullying day–were clearly okay with bullying a boy who had a purple backpack.

I am no stranger to being bullied–not me. Like most of us, I spent a good portion of my school years feeling like an outsider who could never do things quite right. I wasn’t girly enough. I didn’t care about clothes, dolls, boys, and shoes. I had braces and glasses. And I’d like to say all of this changed when I became an adult. Except–it didn’t. Bullies don’t always grow up out of their ugly duckling phase like the rest of us.

But these are supposed to be the hard lessons for teens and young adults to learn. When they’re older. When they’re learning how to be independent. When they’re developing the inner strength to be on their own in the world.

He’s only six. My son is one of the gentlest, most loving people I’ve ever met. He’s a boy who sticks up for others when they’re bullied and helps kids on the opposing sports teams up when they get knocked down. It’s the 21st century. Kids this age are supposed to be colour blind. Politically correct. Socially evolved. They’re supposed to have happy childhoods–ones without worries about school shootings, gender issues, and social ramifications from the colour of their backpack.

And there are days when my son is far older than his years, and an old soul looks at me with his eyes. Usually I see this old man whenever we’re confronted with the reality of his food allergies. I see him when my six-year-old uses an uncanny patience and the stone-cold reserve of a child who has had to develop too much responsibility too early. I see him when he shows the hardened edges of a person who knows they’ve survived a brush with death.

This day, I saw the old soul when my six-year-old stifled his shame and sadness over being bullied because he knew if others could see it, it would only provoke them to be worse. I saw the old man when he told me that it “didn’t really bother him.” I saw him when I found out that he didn’t involve adults… because he has already learned that “telling” over little issues is likely to cause even more problems.

Though wounded in spirit, my son set his backbone and walked away from those kids. His friends, that he said in his little-boy voice, “maybe aren’t really my friends.” He walked away, and then continued on with his day. And he told me that he knew he could talk to me and feel better, which makes me feel like the most powerful person there is.

I am dying a little on the inside–knowing that beneath that, I feel mostly powerless.

I can’t always protect him. To some extent, he will have to endure this rite of passage on his own. And yet… maybe he’s already well on his way. He did the grown up thing, and walked away. And while hurt, while doubtful, he stood his ground.

He weathered the storm, a little battered, but unyielding.

I know adults who don’t handle being bullied with this much grace.

My friends on social media were quick to rally to his defense, including one owner of a purple backpack–my friend Matt–who took some photos for my son to see. Thank you. You made it easy for me to see how the kindness of virtual strangers can do so much for someone, and with so little effort. 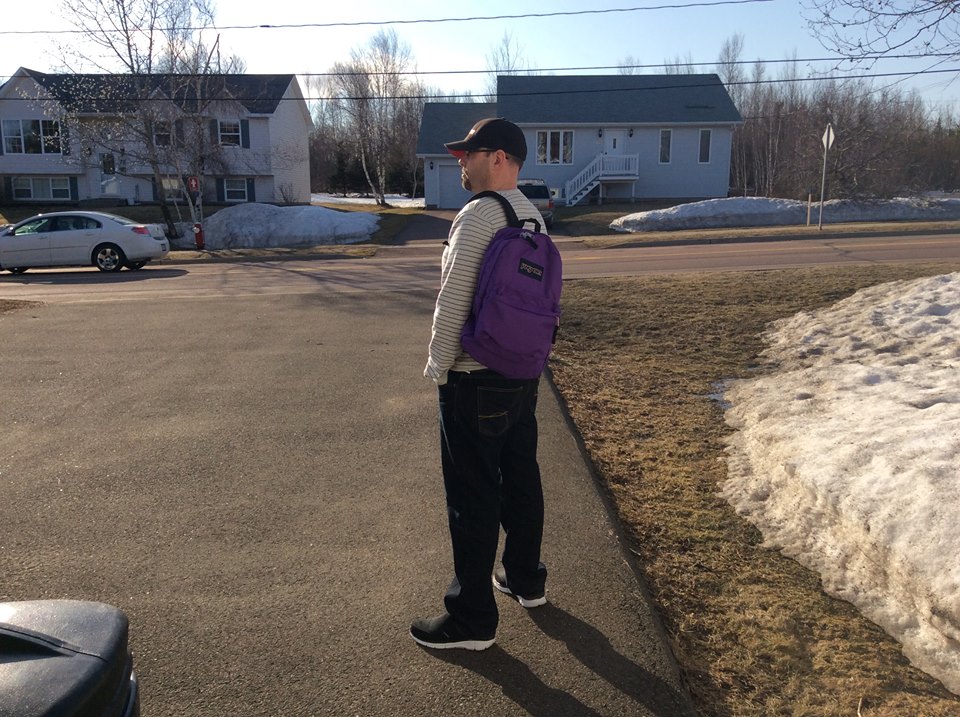 Thanks, my friends, for being my village and helping me raise this child, for affirming that he did the right thing in walking away.

Thank you for letting him know that purple is just a color, and that boys can like purple too.

Thank you for bringing a smile back to his face this day with kindness and for helping fix the cracks these kids put in his self-esteem.

Thank you for helping to make him unbreakable.

Now we can’t let #KimmySchmidt have all the fun can we? #Streamteam fun @Netflix_CA A photo posted by Answer The Tullyphone (@answerthetullyphone) on Apr 21, 2015 at 10:21am PDT