It’s kind of funny how some things just sort of fall together by coincidence.

I have had cinnamon rolls on the back burner in my brain for a while, but what with family matters and vacation plans, cooking and baking got tabled a bit, cause I was cleaning out the fridge and freezer (Oh joy of annual deep-freeze ice scraping!).  While I was down south, I happened to stay in a hotel that was literally right next door to Trader Joes, and while I was there, I happened to get hooked on TJ’s coconut chips.

Well, I got home, and still haven’t gone grocery shopping (I’m pleading jet lag).  I was thinking about what to do up next for a recipe. I was thinking that I should maybe try making those frozen banana chocolate popsicle things that I’ve seen elsewhere, but making my own chocolate instead of using chips.  I was researching chocolate, trying to learn more about ratios of fats and solids and being blinded with the appalling truth that… you know that gritty sugar problem I was having?  Well, I wasn’t doing anything wrong at that stage, it’s that professional manufacturers use a grinder on the liquid chocolate to reduce the sugar granules to a micron size that your tongue can’t distinguish.  Well, food for thought for later… especially since now I’ve found a source of raw cacao paste.

Anyway, suddenly I was chocolated out.  And as I was rummaging in my pantry for inspiration, I found my coconut oil and seized on it, thinking about the coconut chips.  On my table, there was a scribbled recipe for plain ol’ cinnamon rolls.  In my poor, empty fridge, next to the expired milk, was non-expired table cream I had for guests for coffee, and a forgotten box of organic salted butter sticks that have gone ignored for a while.  As I was making the sugar mix, I opted for my palm sugar instead of brown.  And when I opened up the cinnamon, suddenly I didn’t want that spice anywhere near my sweet, rich, coconutty goodness.  So I reached for the vanilla instead, and these lovely buns were born.

As I was in the middle of my mad kitchen scientist routine while making the icing, I was jokingly referring this little experiment as Death by Coconut. When I had the first bite of surprisingly sweet, buttery, flaky, and shockingly not overwhelmingly coconut-flavoured bun, I realized I had it all wrong.

Warm your cream and coconut oil, either briefly via the microwave or in a pot on low heat.  You want to warm the two to a temperature safe for your yeast, so mind the heat and use a thermometer.

In a large bowl, mix the warm water and the sugar.  Add your yeast and stir it to hydrate it, activate it, and keep it from being lumpy in dough.  Once you have proof of viability (really only takes a couple of minutes, I can’t stress enough that it’s worth doing even with instant!:), add the oil, cream, salt, and one cup of the flour.

Stir the flour in to mix the ingredients well, and add the egg.  Add the remaining flour gradually until the dough becomes a ball.  Turn out the ball and knead for a few minutes, adding more flour in sprinkles as necessary to keep from sticking.  The kneading will not take as long as for bread, so be vigilant!  When the ball stops feeling so sticky, and when a pinch of dough stretches and can be made into a translucent “windowpane” instead of tearing, you’re done!

Cover the dough and allow to rest for 10 minutes.  While the dough is resting, using a mixer, cream the palm sugar, butter and vanilla together for a couple of minutes, or until fluffy.

Using a rolling pin, roll the dough out into a rectangle approximately 12″ x 9″.  Use your fingers to push the rounded edges dough back towards the center as you roll to aid you in making the rectangular shape. 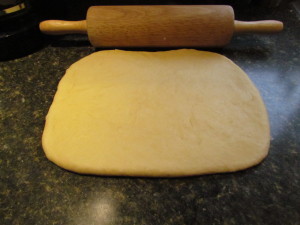 It is more rectangular than it looks, honest! But one corner did suck back in a bit when I stopped to take the photo.

Spread the butter/sugar mixture over the dough and roll the dough by the edge into a log, attempting to keep the edges as square as you can. 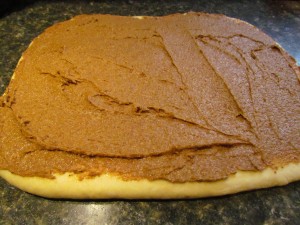 It looks a bit thick, and the mixture will leak out when baked a little, giving a nice caramelized sugar crust on the bottom. If you don’t fancy the caramelized sugar, cut back to 1/4 cup butter, 1/2 cup palm sugar, 1/4 tsp vanilla.

Pinch the seam closed, and cut the log into 8-12 evenly spaced pieces depending on the size of roll you want by cutting from the middle (each piece in half till you get 8 pieces, or half, then half, then by thirds to get 12). 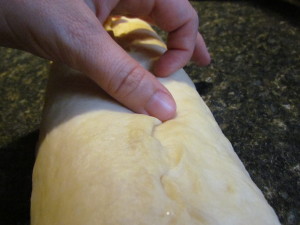 Place the rolls into 1 or 2 (depending on quantity) greased 9 x 13 pans, cover, and let rise for 30 minutes.  Rolls should approximately double. 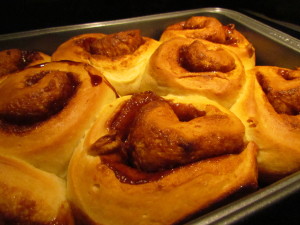 While the rolls are cooling, melt the two extra tablespoons of coconut oil.  Using a spatula, add the icing sugar a couple of tablespoons at a time, mixing till smooth, until you get a sweet, slightly runny icing.  Drizzle the icing with the spatula over the tops of the rolls, and garnish with extra shredded coconut if you prefer. 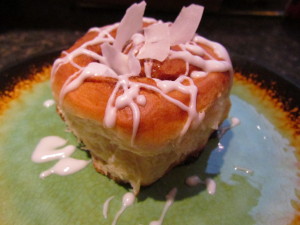 I can’t believe it’s not cinnamon! 😉 Nobody misses it!