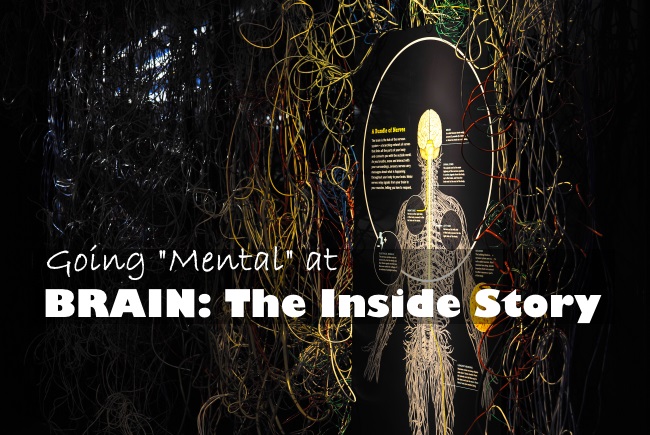 Do you suppose it’s ironic that I was going to go see an exhibit on the brain at the Ontario Science Centre, and ended up a near basket case on the drive there after I spent 25 minutes rolling my car down the Gardiner “EXPRESS” (LOLOLOL) way at 5km/hr? They should preserve the brains of the people who willingly endure that every day for science.

Bad traffic aside (maybe I am the crazy person for driving in rush hour traffic to from Hamilton to Toronto), I was super excited to have a chance to get a sneak peek at the OSC’s latest and greatest exhibit. And, well, I was happy to go there at all. I have wanted to go for quite some time, but it seems like there’s always been other stuff to do instead. I’ve been feeling the place out as a place to take kidlet to foster his interest in all things science, since he seems to have taken well to places like the Ford Museum and the Kennedy Space Center (which are considerably farther away).

For such a complex topic, the exhibit is extremely kid-friendly. There were quite a few children there last night of all ages and sizes, fooling around with interactive games and assembly puzzles which even the adults had a good time with. There’s also “tests” that work different parts of that white matter: a stacking game which requires you to use your prefrontal cortex to consciously plan your moves in advance, a number game that demonstrates short and long term memory capacity, and computer games that test and sharpen your skill (hint: the secret to keeping track of two specific objects moving in a mass of objects is to not focus on either one).

There was plenty of cool trivia and educational factoids, too. Not that I took many photos… my phone’s camera isn’t so hot in the dark (I’m mooching the Ontario Science Centre’s much better-quality photos from their site, so all copyright is theirs). I love trivia. Did you know that two parts of your brain continue building neurons your entire life–one is for memory, and the other is for your nose? The olfactory cortex can distinguish between about 20,000 scents.

One of the things I found especially interesting was the Homunculus, which was designed to represent the weight that our brains give various stimuli from our senses. Of hearing, smell, sight, taste and touch, our eyes actually rank down at the bottom of importance… in fact it’s almost more like it’s a “backup” identifier in some ways. It just sort of adds to the sensory input we’ve obtained first from other sources, like hearing and sense of touch.

Still a really important one, however, judging by the people I’ve read about at those “Dine in the Dark” events who were eating carrots and thinking that they were eating potatoes instead. 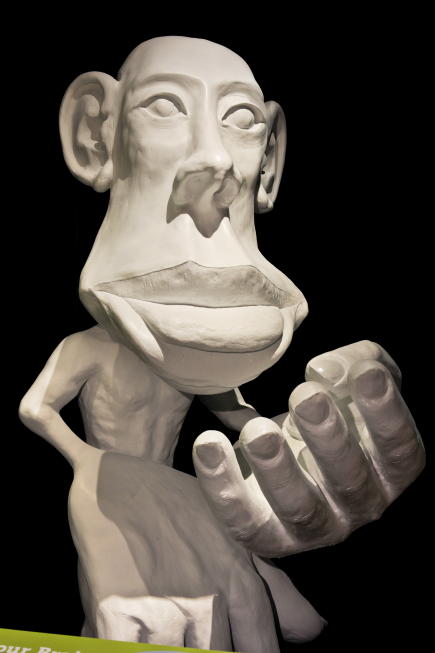 There’s also a section in the exhibit that’s related to learning languages, and I want to show my son this one in particular, so he understands why we have him going to French immersion now instead of trying to learn it later!

It bears mentioning that the exhibit, which is open through the end of March, 2015, also has a series of additional camps, seminars, and presentations that are open at specific dates. A few of them are Facebook chats, where you can discuss things such as brain trauma, Alzheimer’s and “Challenging a Brain Expert.” You can find more information at http://www.ontariosciencecentre.ca/.

I had a really great time, and not least because of the exhibit itself. We also got to meet Dr. Elaine Biddiss, a (female! gasp) engineer involved in the development of ScreenPlay to make an interactive and inclusive waiting room at Holland Bloorview. It’s pretty cool.

See, Mattel? Women can legitimately do math, programming and science without needing their guy friends to help them out. Tell Barbie to get with the times.

Brain: The Inside Story opens at the Ontario Science Centre in Toronto today and runs through the end of March. I totally recommend it as something to do with the kids over these dreary winter months if you’re around the GTA.