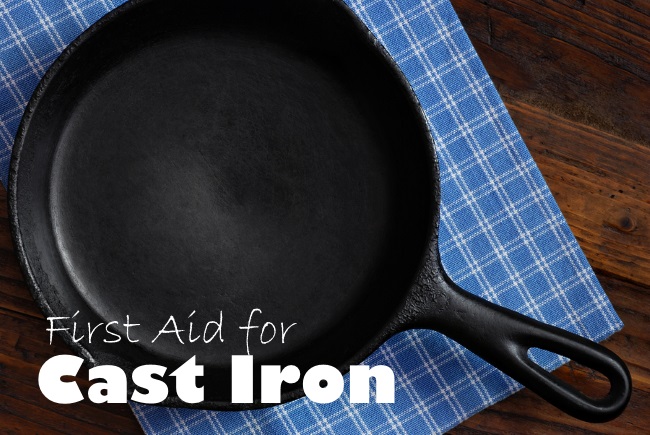 I’ve only recently started to come around to embracing the idea of using un-enameled cast iron. The biggest obstacle in my acceptance, like for many people, was the question of care. How do you take care of this strange beast, which can never be washed in a dishwasher, or with soap? And–oh em gee–what if you mess something up?

Earlier this year, I thought I did just that. I wreaked the animal fat seasoning (a lousy seasoning anyway) on my KitchenAid cast iron pan making tortillas, of all things. It smoked. It blackened. It peeled. And it began to rust. And I freaked the heck out for an hour or so, thinking about the days of work ahead of me to strip and re-season the pan because I was a little careless.

Those of us who aren’t long-time users forget, of course, that cast iron pans are the juggernaut of kitchen equipment: darn nigh unkillable. I defy you to find any other piece of kitchen equipment that can be handed down for a hundred years and more. Cast iron can be salvaged from garage sales and flea markets and restored with a little care to an almost pristine state.

I knew my pan could be fixed; what I didn’t know is it wasn’t going to take me a week. So I did all the wrong things, and daubbed it with oil, and hid it in the bottom of my cupboard for months. But cast iron is surprisingly forgiving of almost all errors, short of dropping it into a car compactor at the scrapyard.

My pan is happy again and back in use.

If you keep your wits about you, your first thought will probably be: “I can’t wash my cast iron, so I’ll try to wipe everything out with a paper towel or some such.” This won’t work very well.

Your second inclination is probably going to be like mine was: run the risk and run it under water to get the soot and burnt things out. If you do this, and/or you’ve damaged the seasoning enough, you’re going to end up saying…

When I attempted to rinse out the soot from my pan, the first thing I noticed when I wiped it out was it instantly began to rust. Should this happen, reach for the nearest bottle of any available oil, and rub it over the damaged seasoning. You’re not going to re-season–yet–you’re just stopping the rust.

How to clean a badly burnt pan, damaged seasoning or no:

When your seasoning starts getting cruddy, or you’ve burnt it, scrub the inside of the pan with coarse salt and oil. Your fingers will look like you stuck them in the fireplace. You will despair. Keep at it. Scrub it until the salt is almost completely gone, and then give it a brief rinse under water, then wipe it out with a paper towel.

And do it again. Over, and over, and over again, until the pan is more or less clean (it will never stop giving a teeny bit of grey from the iron when you wipe out, so don’t bother trying to get it “clean clean”).

The clean level you want to aim for is a normal-looking surface, under a light coat of the oil you used to scrub with, so that you can give your cast iron a new seasoning on the inside. At this point, you should stop and set the pan aside til your next grocery shopping trip, because while you can re-season with butter and what not, there’s better things to use.

Sheryl Canter was my femme chemistry hero of the month a couple months ago. I got lazy about writing this article and so it took me some time to get around to telling anybody about her brilliance (sorry Sheryl). I recommend you read her article about how she chose an oil to season with, what you’re aiming for in seasoning, and more importantly, why, but if you want the TL;DR version: the ideal oil to re-season a virgin surface with is high quality flax seed oil, a drying oil kin to linseed.

The surface you will wind up with is hard and practically nonstick, so I wholeheartedly endorse this. My slapdash re-seasoned pan is beautiful. Next time the need arises, I’ll strip the whole thing to remove whatever previous seasoning is on the outside and upper edges and do it the long way, in the oven, as she recommends.

If you’re coating inside and outside, use Sheryl’s oven trick. If you’re just trying to quick-repair the inside, you can do it on the stovetop. Carefully.

Turn your stove on, and keep the heat low. Wipe out the excess oil that might be in your pan, and let your clean pan heat up so that the pores are open and it’s dry dry. Then remove it from the heat and wipe a thin layer of flax oil in it. Don’t try to cut corners by using a thick one cause you’ll get drips and sticky parts.

Put it back on the stovetop, and turn the heat up to medium-high. The oil will smoke, and that’s okay during the seasoning process: you’re trying to bake it on good and create a hard polymerized oil layer. Let it smoke for a couple minutes until it’s matte dark and looks dry, remove from heat, and carefully coat it with another very thin layer of flax seed oil. Repeat. After several layers (4-6) you will end up with a shiny surface that feels smooth, dry, and hard to the touch. It’ll look as good as when you first bought it. 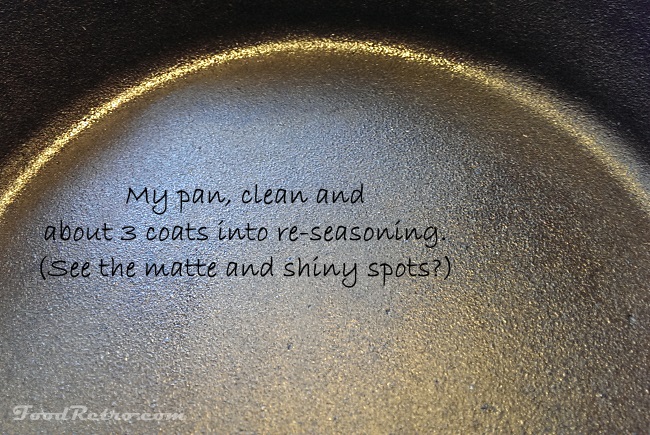 My quick repair job will probably not end up being as durable as Sheryl’s–I’ve not been able to give it a long-term test–but so far so good. I’ve got a pan back, better than new, and without a crappy, rough, animal-fat seasoning on it.

« Be a Champion of the #ONGreenbelt
Spreadable Vegan Margarine »