For sanity’s sake, we’ll drop the 10H2O part… if you’re wondering what that means, *technically* what we know as washing soda is  sodium carbonate decahydrate, which only means that water molecules are clinging to it.  Anhydrous sodium carbonate, if you’ve seen mention of that, has been stripped of the extra water molecules.  But hey, eventually it’ll pick up water from the air and once again become  our beloved washing soda.

I know it’s really, really weird, but I have a thang for some of this science-y stuff.  Rawr. 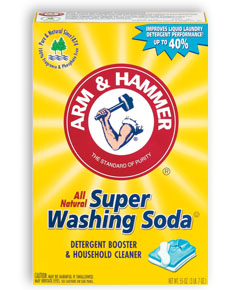 Washing soda as you’re likely to see it in a store.

What is this mysterious substance called washing soda?  If you’ve ever looked up how to make your own powder detergents for the dishwasher or laundry, made a German pretzel, or even tie-dyed a shirt, you have probably encountered washing soda at least in name, if not in person.  Nope, it’s not the same as baking soda, although it is related!  As you will see…

So now what we know what it is, and what it’s for, how do we get our hands on it?

This is an excellent question.  A Google search resulted in many people saying (somewhat loftily) to people also asking this question that it can be found in every grocery store in every place ever.  Sorry, it ain’t always true.  If your local grocery or hardware store doesn’t carry it, my friends, I will tell you how it can be found!

It’s no big deal if it’s anhydrous or not, but what that means in practical terms is that anhydrous sodium carbonate will be more concentrated early on because water isn’t adding volume to the molecule.  As you use your homemade detergents, and humidity begins to attach water to the molecules again, it will seem less effective at the same volume.  Well, it’s not less effective, it just takes a bigger scoop than before because the water does begin making up volume.  So you gradually have to use more… if you began with anhydrous and your environment is moist, you may find that by the end of the batch, you have to use up to 3x as much detergent.

Right.  So now that we know what it is and where to find it the easy way, how do we go about making it, should we choose this adventure?  Super simple, my friends!  Baking soda conversion is one ingredient, and one step.  Take your chemical composition of baking soda: NaHCO3  apply heat, and you get your (decahydrate) washing soda Na2CO3, a little steam, and some carbon dioxide.  Piece of cake!

A lot of people recommend doing it on the stove.  Yes you can do it on the stove, but honestly I really don’t recommend this method, as I’ve heard it can be… explosively messy.  Despite all the research I’ve done, I can’t seem to find any agreement on the temperature at which the molecule converts.  I’ve seen it as low as 140C (284F) and as high as… well, I can’t find it again, but it was somewhere between 300 and 320F.  At any rate, most people agree, that setting your oven at 200C/400F will get you there eventually.  Mine took about 45 minutes for about 2.5 small boxes. 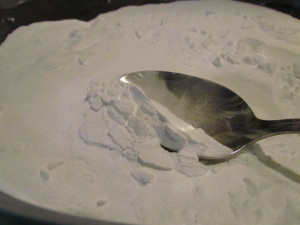 Finished washing soda. Note the “sheeting” when stirred with a spoon.

The cook time varies depending on the quantity and depth of the material, so if you’re a real stickler about the quality of it, you have to measure your end result by weight.  What you’re looking for a reduction in weight of about 10/16 (which is to say, your beginning weight of baking soda multiplied by .63 should approximately be your end result in sodium carbonate).   But you can eyeball it to get pretty darn close.  This is what you’re looking for: 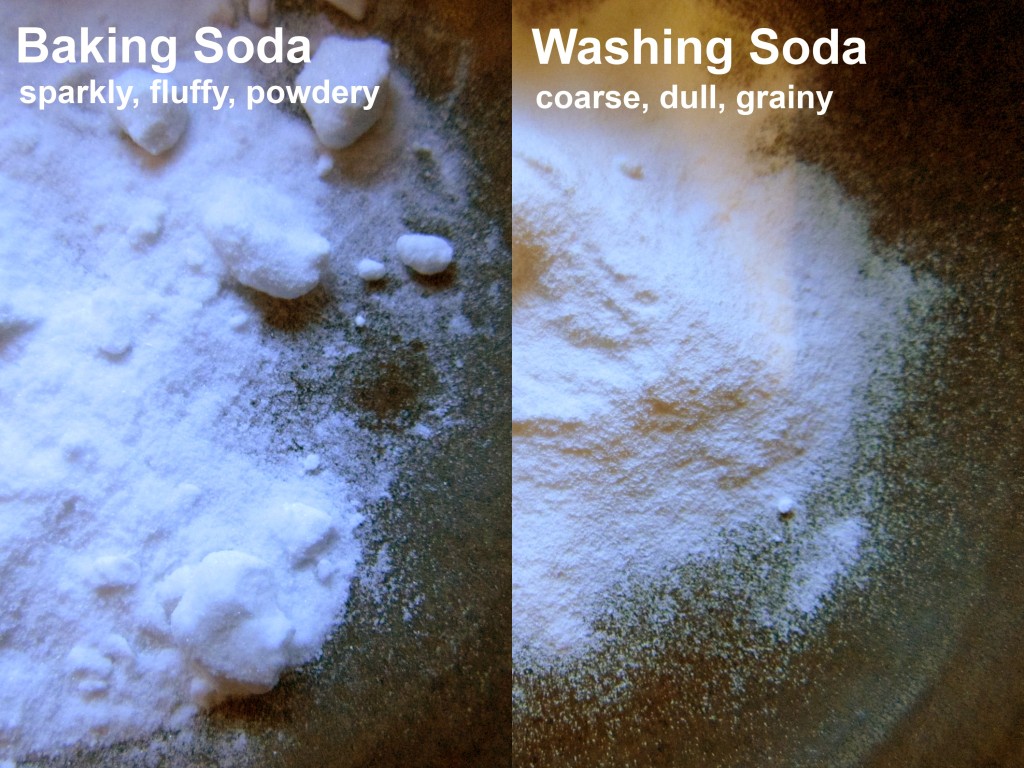