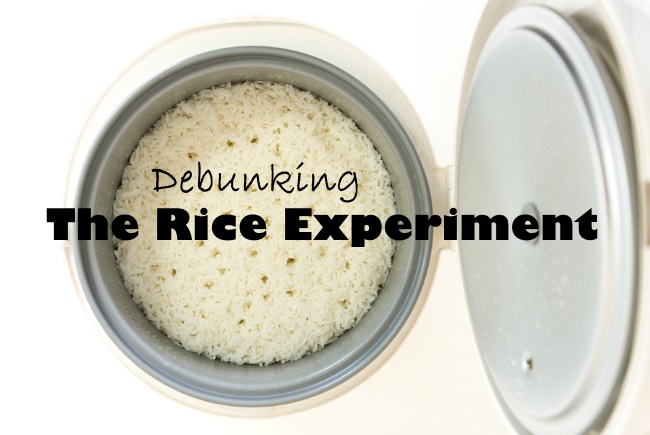 Hey readers, I’m getting all worked up prepping for conference going in a couple weeks, and that involves helping a couple people get their websites ready to go for the occasion! So I’ve got a few friends who’ve volunteered to cover for me. One is Olga Mecking, my friend across the pond. She’s been here before with a Polish curd cheese post. Olga told me about this “famous” rice experiment that I had never heard of even though it was in some positive thinking movie and all over Facebook. I must conclude my brain automatically filters possibly poorly-conducted voodoo “science” experiments.

The Rice Experiment has been making the rounds on the Internet for a while. What’s the rice experiment, you’re asking me? Glad you asked. Masaru Emoto, a Japanese Professor of Alternative Studies (Really? Really? To me, the words “professor” and “alternative” used in one sentence just don’t work well together), who somehow got the idea that our thoughts affect reality.

In his latest so called “experiment,” Emoto prepared three jars with rice. He wrote: “I love you” on the first one, “You idiot” on the other one and ignored the third one. After a month, the first jar of rice went sour, and there was mould on the rice in the second and third jar. The rice that got ignored had the most mould. Emoto concluded that…the things he said to the rice actually had an impact on the rice, causing fermentation or mould to appear. Because you know, it couldn’t be anything else, like.. fungi? But I am getting ahead of myself.

Now I wouldn’t even have thought that this could be somehow mistaken for science. Then, someone in a group I belong to shared it and is actually following the experiment, getting the same results. It turns out, it has been reproduced quite a few times, each time getting the same results (of course I can’t speak for the instances where the experiment failed and no one mentioned it).

I searched the Internet for a logical explanation. Unfortunately, I didn’t find much, probably because the scientific community wouldn’t bother with a silly thing like this. But they should be, because people actually believe this stuff.

Now what would I even care about this? First of all, I am the daughter of two scientists and I believe science (real science) is exciting. I sometimes make my own sourdough – not from rice, but from rye- and know a little bit about how it works.

There are a lot of bacteria and viruses and yeast in the air. They’re everywhere. Scary, isn’t it? Some of it gives us ugly infections. Some of it works miracles in our food, making ordinary flour into something amazing- that is the REAL miracle, not the wacky stuff Emoto would have us believe. What happened with the rice or the flour basically depends on which type of bug gets into it- and also depends on how we handle the rice and the equipment.

With the first bowl, the rice, (that has been cooked and poured warm into the jar) is practically sterile, but there could be only one lonely little yeast cell in it- that’s enough to start fermentation. The rice goes into the jar; there is no oxygen, and assuming that the jar is sterile as well, fermentation happens. While you’re busy transferring the rice to the first jar, it cools off a little, and fungi from the air begin to land on it. Then you put rice with the fungi into the second jar and the fungi cells begin to multiply, causing the mould to appear. Then you put the rice into the third jar and there is even more weird stuff in it- more fungi, more mould.

No amount of talking, singing, praying or reciting poetry would have changed that- it all depends on what bug goes into the jar with the rice. If yeast goes into the rice, it begins to ferment. If it’s mould (another kind of fungi), it begins to rot. It is as simple as that.

You honestly don’t need all that touchy-feely alternative stuff to make a fun and educational experiment that shows all the different things that can grow on pretty much anything- milk, rice, flour, or fruit. You can experiment with temperatures, humidity and see what grows where. That is the cool stuff.

Now it could all be true and our words and thought could actually make mould grow or cause fermentation, but that’s rather unlikely- and anyway, the rice experiment totally fails to do so.

What are your thoughts on whether you can influence mold with your thoughts? I wonder if anybody’s conducted the experiment where they labeled the jars in reverse order.