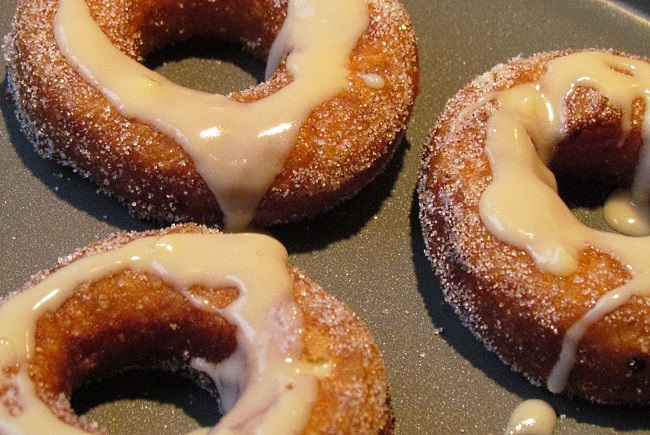 Before I begin, I’m taking 10 seconds to say that while the cronut in and of itself is a recent craze, it is VERY closely modelled on the creation of a croissant.  It also uses pastry cream, a French take on traditional custard for the purpose of pastry-making, and both custard and Crème Pâtissière have a historical background dating back about FIVE HUNDRED years or so.  The cronut has its roots in food products far more retro than I ever imagined.

I looked at several recipes for cronuts and croissants before I started trying to duplicate them, and they are more or less identical.  Layer of dough, layer of butter, fold fold fold, lots of time in between to rise, 24 or more hours to a cronut, or even a croissant!

And then, I came across a video by Sorted out in the UK, which had a radical take on it. It’s so radical, it totally deserves the linkback. As far as I’m concerned they’re solely responsible in inventing this astonishing method to save buckets of time (they may not be, but like I said, I looked at at least seven different recipes/articles/blogs, and theirs was the only one that recommend combining the butter IN the dough and not rising for a half hour between folds).

Needless to say, I decided to end up using their recipe and method, and spent a good hour converting units of measure to the kind that we use here in North America. Please feel free to take advantage of my hard work in terminology, ML conversion and scale measurements, but I do strongly recommend hopping over to their site and checking out their video at the very least, which gives an excellent overview of the process.

It looks complicated, but if you want to try them, nothing about making cronuts is rocket science.  Just be prepared to dedicate a fair amount of time to this baby. Got it? Great, good. Let’s get started.

Few things to know up front: 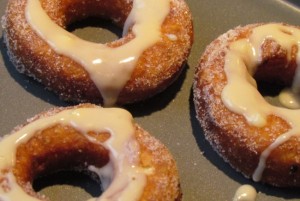 Is it a cronut?  Only Ansel could say for sure.

As far as my attempt, I mucked up the beautiful square-edged flake layers by leaving it rising in the fridge too long–the layers began to grow together and parts ended up looking more like a regular (but still extremely light and fluffy) donut in the end.  I would have redone the recipe to rectify my error, except somewhere about midway through my efforts while I was sweating over hot grapeseed oil, I vowed Cronuts made the list of yummy things I probably cannot be bothered to ever make again.

While they didn’t have that amazing flake thing going on, they were still quite awesome.  I took my finished product anyway to a friend’s house for guinea-pig testing.  After explaining the short life expectancy, people gleefully dug in and the cronuts and even the sugar-dusted scraps were gone within about 5 minutes.  Well, all except for one lonely last whole cronut that people kept eyeballing meaningfully but were too polite to take (Canadians, eh!).  It did disappear before night’s end, but I’m not sure who the lucky eater was.

« Homemade Pectin
Simple Pleasures (Or, What Keeps My Butt In The Kitchen) »