I made an awesome vegan soup. One that you can feed to all your carnivorous friends and they will like it. I know this because my husband had seconds of this recipe. He is always “meh” about soup, especially if it includes “hippie things” like wild rice.

So, I’ve been bragging about my awesome vegan dish. Vegans are probably sniggering at me already, but you’re supposed to be supportive of the lifestyle conversion! I’m pretty sure people on Facebook already think I’m some sort of crazy food lady (I prefer to be considered eccentric). And I’ll now brag about it here because this is my blog, and most people probably skip past the story to the recipe anyway. Therefore, I’m free to cheerlead for myself.

Seriously now, I’m pretty sure that the reason I’m so tickled with this recipe is that I got to use nutritional yeast and I liked the result. What is nutritional yeast? It’s deactivated yeast organisms that were cultured on maple syrup. They give stuff a cheese-like, creamy flavour. That’s not exactly a description that reads like a yummy endorsement to someone who isn’t vegan–yum, dead yeast!–so I’m just going to say relax. You don’t want me to tell you what’s in your yogurt. Or how your hamburger got from cow to table.

Speaking of which, I might have converted one of my friends to veganism after my layman’s version of the process of beef aging. I tried to make her feel better by telling her about culturing a sourdough starter, but that didn’t fly well either.

Food in all its science-y glory is not for the faint of heart.

This recipe I’ve made specifically to be acceptable on the Daniel fast as-written. Soy milk is compliant as long as it’s unsweetened; nutritional yeast is deactivated and will not cause leavening; spelt is an ancient-grain wheat and compliant as long as you use the unbleached, whole grain variety (honestly easier to find than white spelt flour anyway).

All of my fasting friends are interested. Or at least they’re pretending really well. Personally, I’d like to imagine that after about a week on the fast, they’re desperate for something that doesn’t look like clear broth, flax seed crackers and celery sticks. I am sure that this is not how they’re really eating, but it’s possible.

If you begin with homemade vegetable broth, your soup will have a rich, full-flavoured backbone that you just can’t get out of a tetra-pack. Barley, quinoa, and wild rice make a hearty melange in this soup thickened with whole-grain spelt, and the nutritional yeast adds a smooth, savoury cheesy finish.

Don’t skip the yeast. It’s totally worth hunting down in the health food aisle. 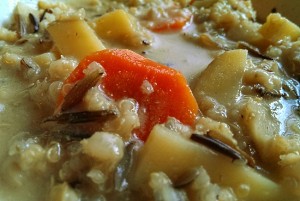 « Being Organized! (Or, How Chef Michael Smith Destroyed My Kitchen)
Huge “Sew Creative” Book Giveaway (Open to US & Canada!) »