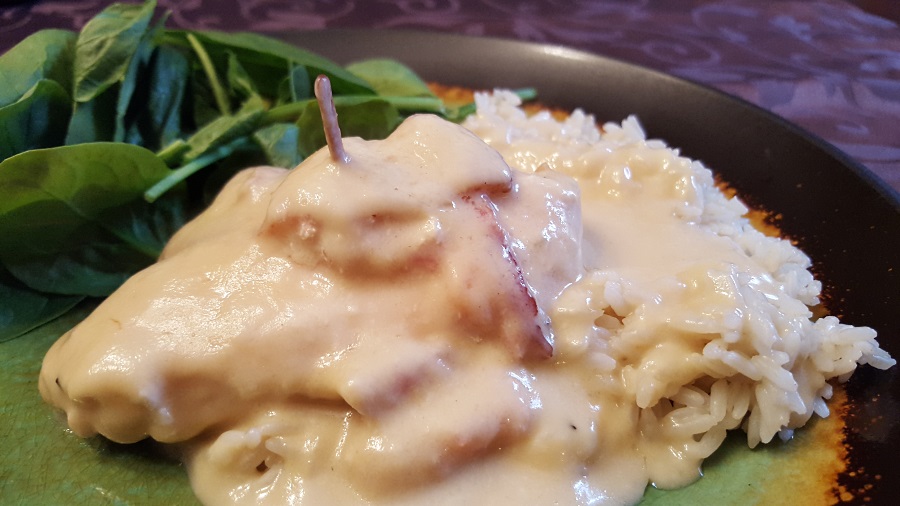 It should probably come as no surprise that this recipe is a bit of a retro. My mother and I have been making variations of this creamy chicken recipe for about 30 years, and its origins probably go back even farther. Canned goods became a staple of cooking in the 1950s, and they influenced foods for a long, long time. While some things haven’t survived the test of time, using canned cream soups in cooking to produce fast and easy sauces that dishes are baked in has.

I don’t actually remember the original name of this recipe. It was probably something generic like “Chicken Delight” or “Creamy Chicken Supreme.” I do remember we discovered it in a cookbook that was decorated with characters from Precious Moments. The original recipe called for bacon and ham-wrapped chicken breasts oven-baked in a sauce of cream of chicken soup and sour cream, served with egg noodles (I think). It was a great tasting staple recipe, and it lent itself well to variation.

We both liked doubling the sauce recipe. MomRetro eventually liked to cube the chicken in a casserole and mix the whole thing in the cooked noodles so that they’d have a chance to absorb some of the sauce.

Me, I ended up adapting the recipe for the crock pot – the better to keep the kitchen cool, m’dear. And that’s why this recipe was the perfect choice for the long weekend – we went outside, did yard work (I’m a super exciting person, I know, but I like to chill), enjoyed the nice weather, and had a hot meal waiting for us when we came in hungry.

Sometimes I make the crock pot version over onions, potatoes and carrots as a whole meal, sometimes I do the chicken alone so I can serve it with rice and a side salad, as I did this most recent version.

(One pot Creamy Crockpot Chicken – my recipe at Life In Pleasantville)

The base sauce is essentially the same from variation to variation: 1/2 cup of sour cream to 1 can of cream of chicken soup, and you can spice it up as you please. I like to add a pinch of dried thyme and sometimes wine (not in the original recipe), and often a splash of soy sauce to replace the umami that I believe was originally created by powdered onion soup mix, something that I stopped using so much of.

Use the bacon, or don’t. My mom and I both dropped the ham from the recipe, but use it if you want a creamy cordon-bleu type chicken. Cube the chicken, or don’t. It won’t affect the cooking time by more than a few minutes. Make the chicken alone or add vegetables for a one pot dish that you can set and forget. Make it in the crock pot for 5 hours on high (add an hour if you’ve used a lot of veggies in the bottom of the crockpot), or bake it in a casserole dish in the oven for 45 min to an hour at 350F.

In short it’s a recipe you can’t really go wrong with, and you’ll probably find it will linger in your repertoire as an easy-fix. Of course, like many of these really tasty comfort food recipes, it’s not exceptionally pretty.

But one of our favourite sayings growing up was it all looks the same in the end! It’s how it tastes that really matters… and the taste is divine. 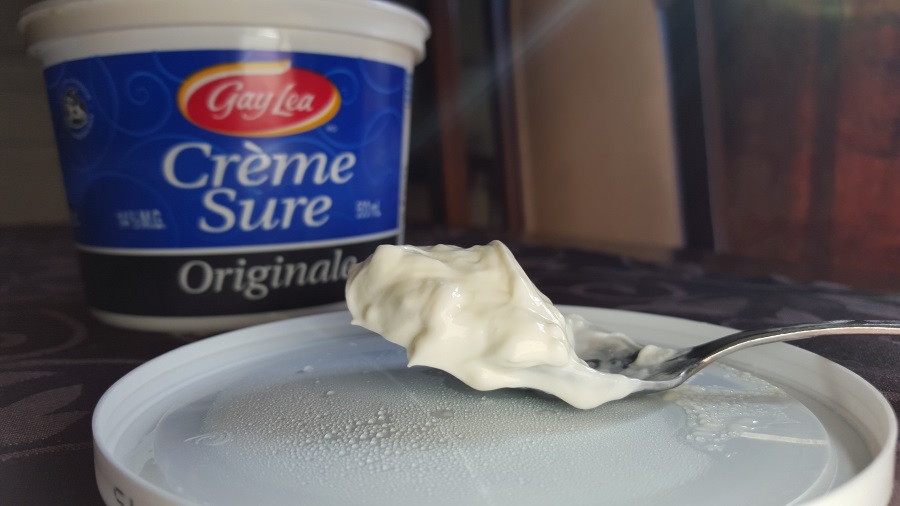 My home brand for cooking with is Gay Lea’s Sour Cream, and I like using the regular, which is thick and perfect for sauces. Gay Lea’s Sour Cream is also available in low-fat, no-fat, and lactose free versions, and while they work fine, if you’re adding much in the way of liquid to the sauce, such as wine, you should opt for regular full-fat sour cream to keep the end sauce from being too runny.

Happy summer to you, my readers! 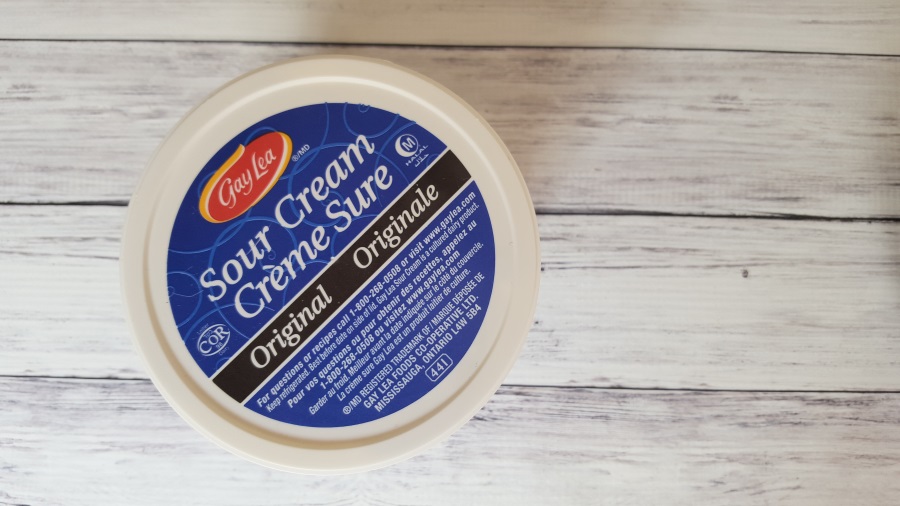 Disclosure: I am part of the Gay Lea Ambassador Campaign and I receive special perks as part of my affiliation with this group. The opinions on this blog are my own.