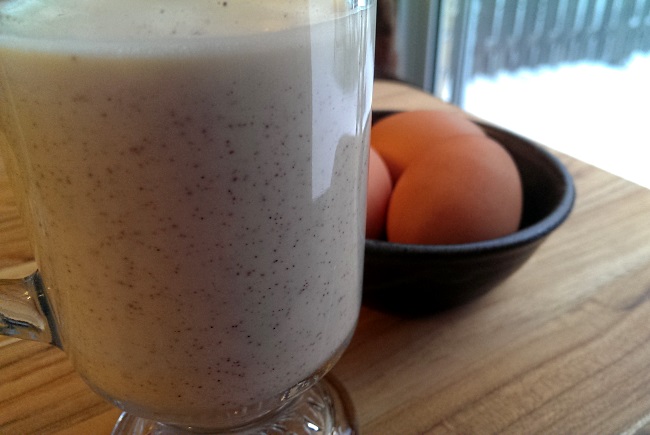 I swear, the best way to discourage yourself from using ready-made products is to read the label.

I had a billion and one eggnog baking recipes that I was looking at for the holiday season. Eggnog cookies. Eggnog breads. Eggnog all the things. But eggnog itself  was not on my list of potential things to cover on the blog. I was like, “whatever, I’ll just buy it to test recipes with.” I mean, I haven’t had eggnog for a while (okay, maybe like two decades, give or take another), but eggnog is eggnog. Right? Right?

Jumping Jehoshaphats, I couldn’t find an eggnog at the store that actually had EGGS in it. Modified milk ingredients (???), artificial flavour, artificial colour, imitation rum extract, carrageenan, guar gum, etc. etc. No eggs at all. Not even real milk or cream. Go figure, the FDA now allows people label something as eggnog even though it contains less than 1% egg yolk and milk and/or milk products. What the heck is this? This isn’t eggnog. This isn’t even “eggnoggish.” It’s more like “New Eggnog.” Maybe even “The Holiday Drink Formerly Known as Eggnog.”

No word of a lie, I wanted to throw up in the store. Just sitting here, thinking about it and writing about store bought eggnog is making me queasy. No wonder people hate eggnog these days. Licking the bottom of the fridge would probably taste better.

Do yourself a favour and never buy it again.

After settling my gag reflex, I grabbed 3 dozen eggs and went home. Coincidentally, I had just re-summarized cronuts for my friends at HOMEGROWN.org, and I had holiday parties to go to.

But what, you might ask, do cronuts have to do with eggnog? Well the cronut itself, nothing. Pastry cream? Lots. 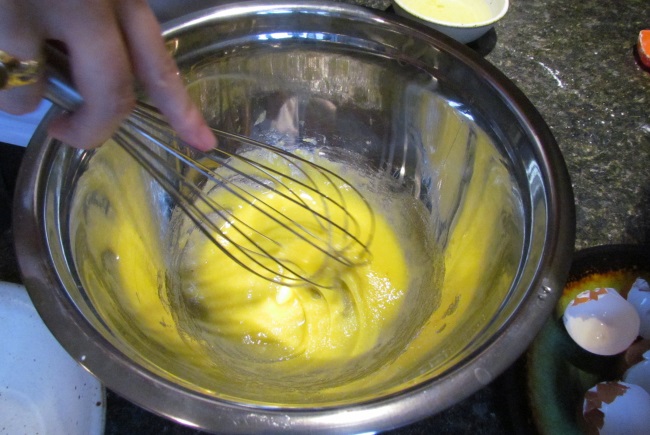 Like others who cringe at the sight of Rocky drinking raw eggs, I prefer my eggs experience some semblence of cooking. Fortunately for people like us, eggs pasteurize at somewhere between 130-140F (54-60C), well below the temperatures at which egg yolk proteins begin to thicken (~158F/70C). So it is entirely possible to have 100% safe eggnog by making a version of custard that’s still very runny.

Do this. You will not only be the hit of the party, you will have people at your feet worshipping your culinary prowess.

Nobody has to know that it’s not that hard. I’ll keep your secret.

The key to preventing curdling is ensuring that your eggs are well whipped before you add the sugar, well-creamed again after adding the sugar, and then tempered by slowly incorporating the hot (but not boiling!) milk into the egg mixture before returning it to the stove for careful cooking. My gas range is sensitive enough that a heavy-bottomed pot and a lower temperature are all that’s required to prevent milk from scorching or the eggs from overcooking. If you find you cannot heat milk slowly to near-boiling without burning it, you may want to opt for a double boiler. The only other equipment you require is a whisk and a little fridge space!

My old eggnog recipe was lost to the sands of time, but this one’s pretty close, and very, very good. It’s awesome without the rum or rum flavour–thick, rich, creamy, sweet and spicy with cinnamon.

I brought none of the eggnog that I took to the party home with me. I’m have to make more to bake with. 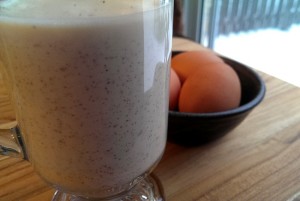