It took several tries, but we got a solid chocolate chip that survived the bake test!  Yay!  It’s soft and sweet and richly chocolatey.  I wanted to use a more natural sweetener but it’s going to take a bit of balancing.  At least now got a workable starting point.

You may be thinking, why would I want to go through the trouble of making chocolate chips?

Because you’re a control freak like me, have a child with allergies like me, or decide there’s no way that you’re paying that much money for your own organic and natural chocolate chips, like me.  The surprising win out of this whole situation is the price.  I don’t have the exact cost figured out what with the vanilla and sugar, but it’s in the neighbourhood of $2.50 per batch for organic, and $2.00 of that is the cost of raw organic cacao butter.

I’ll post the recipe below, but the first thing I want to impart is the hard-earned wisdom that came with successfully making a chip proven tough enough to survive 10+ minutes at 375F in a chocolate chip cookie: 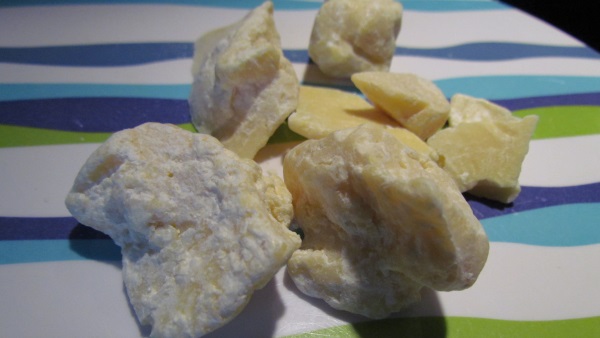 This is cacao butter. It costs about $16 a pound at the local health supply. Better prices may be had, I really haven’t shopped around (not too many places opt to carry it). It is a naturally chunky looking solid white rock of oil that smells very strongly of chocolate.

Ok, so on to the recipe! (Makes about 1.5 cups of chocolate chips)

In a double boiler, or a widemouth glass jar in a pot of water, start the cocoa butter melting on medium heat.  Add sugar, cocoa powder, and vanilla once a little oil has liquified.  Stir the mixture frequently with a spatula.  Once the cocoa butter is nearly melted, turn off the heat, and continue stirring until completely melted.

At this stage, the chocolate will be extremely liquid, look a little oily and slightly gritty on your spatula.  Here’s where the magic comes in.  Add the milk, stirring, gradually in teaspoons (3tsp in a tablespoon).  The sugar will dissolve and the chocolate will congeal into a form that is soft, but no longer liquid and no longer gritty.  It’s almost like it forms tiny, soft grains that compress into a smooth mass when it cools if you’re so inclined to pipe it or roll it out (seized chocolate).  You can’t melt it, so don’t turn up the heat.  I don’t know how else to describe it, so a picture’s worth 1000 words: 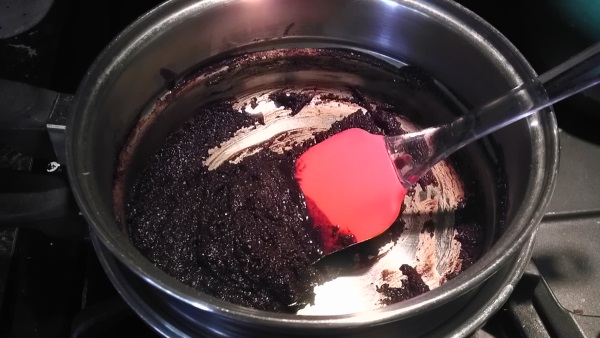 Spread the chocolate mixture evenly on a large plate using the spatula and put it in the fridge to set, about 30 minutes.    The chocolate will be set but soft and easy to dislodge from the plate onto a cutting board.  You can chop it fine or crumble it easily with your fingers.  I chopped it into pieces approximately the size of regular store-bought chips for a more accurate bake test. 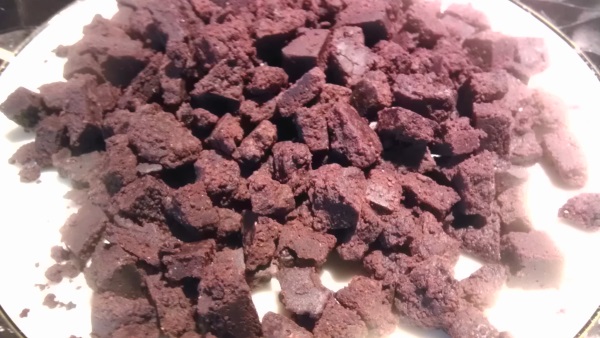 So, how did it turn out?  Pretty good!  And it held up beautifully, as you can see.  This is a small cookie straight out of the oven, baked 375F for 11 minutes, so you can see the chip is warm enough to be soft in the middle just like a store bought chip, but it didn’t turn into ooze. 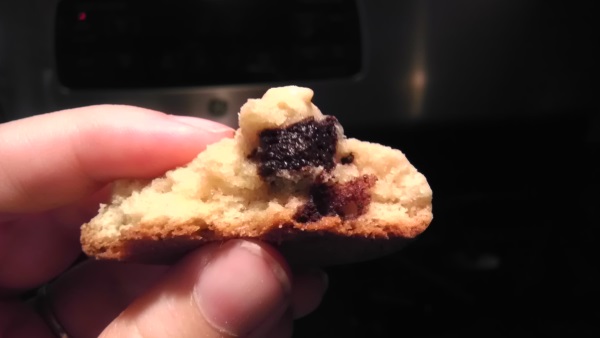 UPDATE: 7/6/15 – I’ve been playing around with chocolate chips again, and I’ve created a semi sweet recipe (no soy or dairy) that still survives baking fairly well and looks more like regular chocolate, if you’re looking for an option for making chocolate bars, candies, and bark. You can find it here: 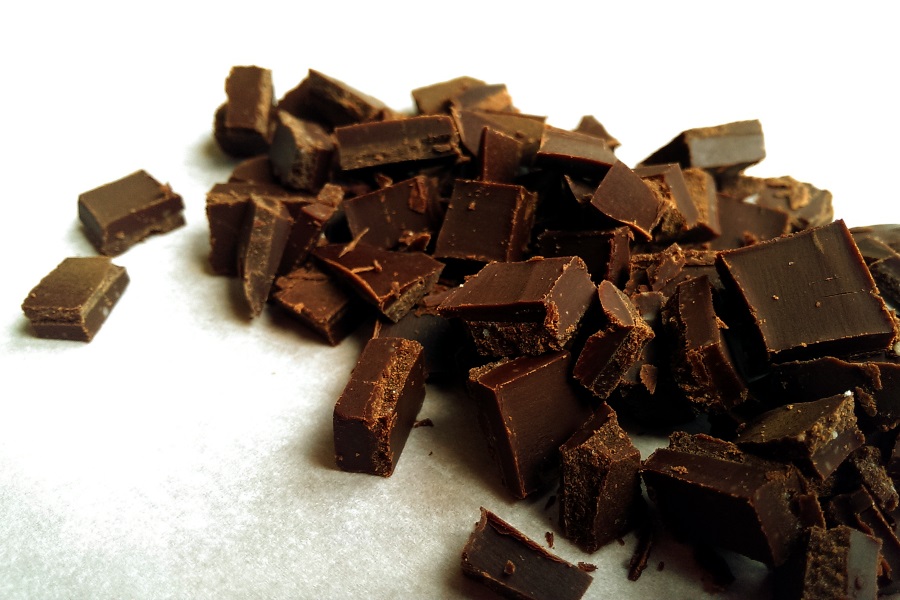