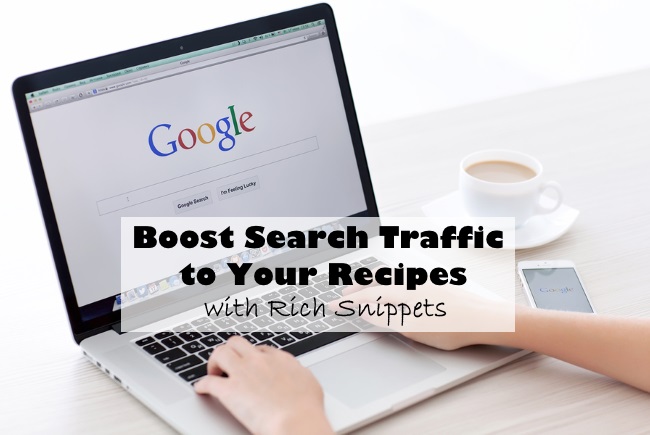 If I’ve learned one thing during my 18 months of food blogging, it’s that even figuring out the list of things that you ought to know can be a trial… Especially when it’s written in tech-talk. I believe that Google’s Rich Snippets are something that you absolutely must include on the list of things to figure out, especially if you do reviews or recipes, whether they’re your primary focus or not.

There’s a lot to learn about rich snippet markup, but hopefully this gets you started.

What is a snippet? A snippet (which is not the same as a rich snippet) is the couple of lines of text that Google displays on the search page. A snippet is a sentence or two, an excerpt, which usually includes your search keyword(s) in an attempt to help you determine whether or not the search is helpful to you without having to go and read it.

What’s the difference between a snippet and a rich snippet? The rich snippet is an “enhanced” snippet. It includes extra markup (code) which is used by Google and your browser to organize the data into something more complex when that information is searched.

The data that is included in a rich snippet can vary, but for a food blogger, a rich snippet can contain photo thumbnails, review information, calorie counts, and even prep and cook time. At the time I’m writing this, Google’s also busy rolling out what they call Recipe View (currently only in the US and Japan) which will change how recipes appear on search results again.

You can see how rich snippets contain far more visual information at-a-glance than a traditional snippet. This makes them more useful and more appealing, and people who like what they see are going to be far more likely to click through to your site. It’s a good thing to have.

Manual Rich Snippet markup gives you full control.  You can show as much or as little information as you want to, and you don’t have to worry about some of the problems that can crop up by using a plugin.

But it is a little more time-consuming up front and it won’t look as beautiful as some of the cards can make it. You also have to have the knowledge of HTML and decide upon a format because there’s more than one. Currently, Google supports microdata, RDFa, and microformats (hRecipe) properties. Google recommends that you use microdata as listed on Schema.org, but you can find more about the properties and tags for all formats here.

But plugins can conflict with your theme and other plugins, or cause damage to your site when you try to remove them. You also seldom get the level of markup with a free plugin that you see from a site such as Allrecipes. They may not work properly with translation, and

The more serious problem with plugins is that you have little or no control. When you use a third-party program, you depend on the people who developed that program to keep it working and updated. You will have to appeal to the developer for support if you have problems. If the developer stops supporting it, especially if your recipe plugin works by storing the recipe data on another server (and some of them do), then you may lose your recipes. Or a WordPress update might break some or all of your plugin, and then you have to transfer all of your recipe data again.

Some developers also demand rights to your content–in the fine print, you may find that the developer reserves the right to host your recipes on their recipe website and keep copies for an undisclosed “reasonable period” after you stop using the service. Some plugins have unscrupulous developers, and they may violate your intellectual property rights.

Whichever way you decide to go, make sure that you keep a separate backup of your recipes offline… copies in PDF format or in a Word Document, if nothing else. That way, you may have to spend some time restoring stuff, but you’ll never have to worry about losing it.

How do I know if my rich snippets work? Google has a structured data testing tool that lets you preview how snippets will eventually appear on your site. It can actually take quite some time for them to begin to display properly–sometimes it may take as long as 2-3 weeks–so don’t stress if they don’t show up right away.

The structured data testing tool displays the information as Google reads it, and it will highlight errors in red, showing problems that may require some troubleshooting.

Google’s bots routinely crawl your site and page, so if you want to go back and update your old content, you can! Give your links a new life and make them clickable with the power of rich snippets.