I have no idea why I planted dill.  I like the way it smells and tastes, but I almost never use it.  Dried dill weed stays pretty potent for a long time, and I still can’t use up a small bottle of it before it starts going meh.  So imagine my chagrin when I give my wee dill plant I picked up at the nursery about 6 inches of planter space, and it grows into a towering behemoth of nearly four feet before the end of June.

Indeed, it’s grown so tall that the root base can no longer keep it upright.  It’s leaning like the Tower of Piza, and flowering to boot.  I was thinking seriously about hacking it down, and was scissors in hand, when I realized it’s COVERED in nine of these giant 2″ caterpillars.

So naturally, the first thing I do is scream like a girl.  In my defence, a) I was startled, having not seen them until I was practically touching them, and b) I hail originally from Florida, and bugs there of many types, including caterpillars, are not always harmless to people.

After I calmed down enough to realize that the caterpillars were only showing horns and not interested in jumping off the plant and attacking me, I took a picture.

I know I’m a gardening neophyte and I expected I would learn a lot as I went along, I didn’t realize I would find such an opportunity to look into really cool insects either.  I figured I would mostly be dealing with typical, boring garden pests like aphids.  Imagine my pleasure when I find out that a whole crop of papilio polyxenes, AKA, the Black Swallowtail caterpillar, has made a home in my ginormous dill plant.

These caterpillars eat dill as well as related plants like parsley, carrots and fennel.  At the start, their damage was relatively minimal, although it’s no longer so.  I gave away two caterpillars to a neighbour with children, and the seven that remain have been making spectacular inroads in the last week.

The good news is that I was going to destroy the dill plant anyway and they ignored my actual parsley plant altogether.  My son’s been “petting” the caterpillars all week long and we’ve been having a great time watching the little guys nibble down the fronds tip to stem.  But the best reason to keep my unwanted dill is that they are beautiful in butterfly form! 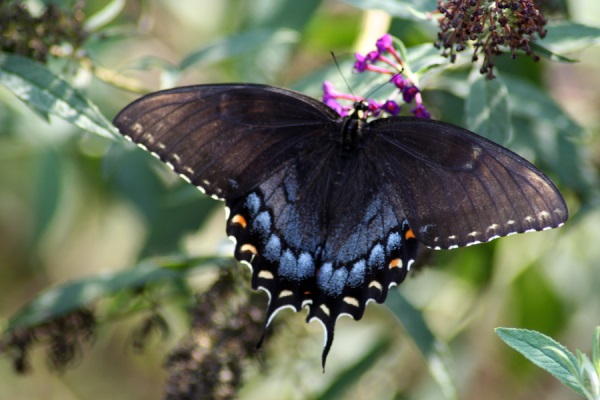 Some people consider the caterpillars themselves to be a beneficial nuisance, since they emit a bad-tasting odor and toxins that they absorb from plants which make them distasteful to birds and other things which might be looking to pick over your garden.  The butterfly, however, is a great pollinator.