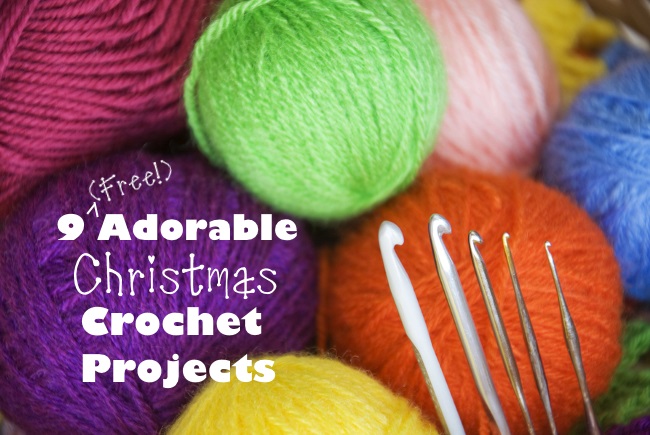 I’ve been thinking about busting out my needles and yarn again… It’s been a while since I’ve done my crocheting. And some of these free patterns are totally adorable.

Or maybe I’m just nesting. I am not sure.

One thing is for sure, crocheting is something I can do, and all these other Christmas crafty projects are something that I’m failing at. I stared at these fuzzy ball things I bought at Michael’s for a good 10 minutes, wondering what possessed me. So of course I went to Pinterest, but instead I ended up looking at crochet patterns because… fuzzy ball things.

Some of these things are astonishing! And so I’m doing something I’ve never done before… I want to share them because they look amazing. And cause Pinterest is so Wild-Wild-West-y with a bunch of pins that go to bad sites (I REALLY wish we could report false or misleading spam Pinners, Pinterest!) that may end up costing you a night deleting malware off your computer.

So don’t go to Pinterest. Pinterest is mean. Here’s their projects, and the photographs belong to the project creators and the sites linked to, not to me, and I’ve made sure that clicking the image leads directly to their (legit) site for the plan and instruction. I haven’t made any of these projects myself (yet), so I can’t verify that they all work, but the plans look legit, and I’m going to be trying them myself soon. If you want to pin an individual project, please go to their sites first and pin.

Sure, you could be a conformist tree-killing shlob using a paper sleeve to keep you from burning your mitts off on your morning cup of Timmies. OR! You could use a reusable hippie crocheted cozy. Better: Bernat says you should show your epic holiday spirit by making it a look like a reindeer.

These are totally adorable, but I don’t even have a crochet hook this small, given the paper clip as an estimation of scale. So it might have to be a project for next year, and I’m saving it anyway. Thanks for the pattern, CraftStylish!

Truth be told, I’ve got more throw blankets than I know what to do with already, but I am totally digging the pattern of this blanket. I don’t usually see throw blankets that make me go “Wow, pretty!” I love RedHeart’s patterns, though. I’ve always found that they’re easy to follow.

The How to Make a Crochet Star Tutorial

There’s a pretty pin on Pinterest of a crocheted star with a loop to make it a tree ornament, but it’s one of those images that never went to a real site. So since she’s the one who made the tutorial to go with the image, I pulled one of One Little Bird Blog’s photos. It’s a super quick project with a puff stitch. Head on over to her site for the instructions and more how-to images.

How to Crochet a Star – One Little Bird Blog

If there’s only one project I can make this year, this is going to be the one. IT IS SO CUTE. I’ve been wanting to make a beard beanie for my menfolk since I first saw them a few years ago, but I never got around to trying to figure out how to crochet the beard. Ashlee Marie not only figured it out already, she’s got the patterns for the CUTEST DARN SANTA HAT EVER. O M G.

Must make hats for everyone I know. Everyone.  EV-RY-ONE.

Run over there now and worship the pattern maker. I book marked it, totally. I never squee over this stuff, after all… that’s usually reserved for kittens. 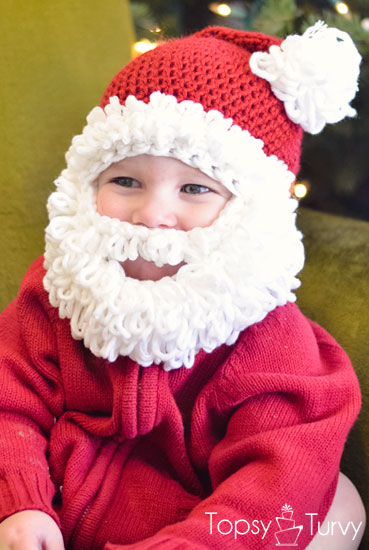 It’s just a wee bit anti-climactic after the Santa hat, but I know people who love their snowmen, and this little guy is perfect to perch on a Christmas wreath. Check out Craft Elf for the pattern! 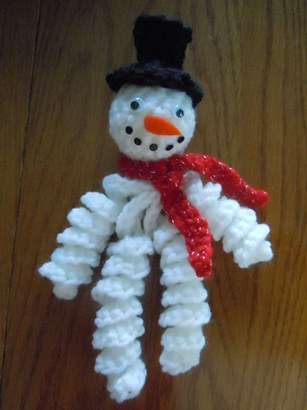 I have a bunch of clear glass ornaments, actually, and this might be the awesomest way to dress them up, or at least, pad them a little bit so the cats and kid don’t break them. Unfortunately that’s a project I probably should have started in August. I think these would look really good with the crocheted stars. Imagine handing these things out as party-favor bags? Also a project I probably would have had to have started in August. They’d probably also make really cool ornaments for hanging on the tree, as opposed to the fireplace perhaps. Kitteh stockings? Holiday beer cozies? Endless possibilities. Another nice RedHat project.

Also too cute. Hard to pick between this and Santa. Maybe this for kidlet, Santa beanie for dad? Or vice versa, for the comedy appeal. Or heck, maybe I’d just make it for me cause: long hat = cool.