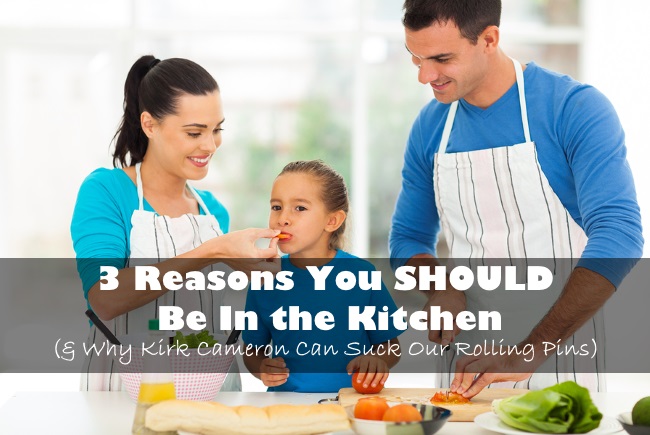 I love being in the kitchen, and it has nothing to do with my gender. You know what kills my joy? Having it intimated that this is the place where I belong… because I am a woman. No other reason.

The kitchen is where I am, because this is what I love. This is my workplace (yes, my actual workplace). I even have my computer more or less permanently set up right on my kitchen table. And… that’s it. BUT I’m a woman! I should be the keeper of the house and home, the nurturer of children and doer of laundry.

HEY YOU. Go to the kitchen and make me a sammich.

The stereotyping of gender roles does more than insult women. It also insults men who might decide that maybe they would like to be these things. It prevents fair division of domestic labour when both parents are working jobs, and it devalues vital life skills and the people who have them. Just as parts of the body get fetishized, like hands and feet, the kitchen gets fetishized as some sort of Sexist Mecca of Domestic Do-Goodedness.

The kitchen is a place of power without gender. I’ll give you 3 reasons why both women and men belong here:

The kitchen is now the social center of the universe in the home.

Rooms are private havens, or designated for activities such as watching TV, and perhaps you’ve noticed that parlours are no more. Sure there’s the occasional area, like a great room, that probably gathers dust. But most people really like to hang out in the kitchen, whether they’re having a huge party or not, as evidenced by the fact that kitchens are among the most important renovations someone can do to their house. They’ve gotten a lot bigger, too, in newer builds. They’re warm. They’re communal. They invite conversation, movement, and camaraderie.

Trust me, I have it on good authority that even the guys like to be there.

The kitchen is the foundation of healthy living.

This is a big problem, and we’ve lost sight of living sustainably, healthy lives with fewer illnesses and better mental acuity. You want a six pack? Lower you cholesterol? Eat better? Just lose some flab? No fitness regime exists as exercise without a diet plan for people over 25. It’s either diet, or diet and exercise.

Guess what the common denominator is? It’s not my gender.

The kitchen is the kingdom of science and math in the home.

Chew on this: If you cook, you do science. Hard, life science. You are actually doing chemistry every day, even if you don’t realize it, even if you don’t understand the processes that make it work. And to make it work, especially when baking? You do math. You do fractions, ratios, and even formulas, in a practical-use setting that is an excellent place to foster the interest of children (boys and girls alike) in STEM (science technology engineering and math).

If you know what you’re about. And if you don’t, well, it’s not like it’s too late for you to learn.

You know what else the kitchen is? It’s also a great practical demonstration in financial literacy and basic accounting. Eating out, ordering in, and buying a lot of pre-made convenience foods (like salads from the salad bar) are all fine things to do, but you pay for them dearly. You could save hundreds of dollars every month, especially if you’re the type of person who eats out twice a week or more–and those are just the lazy financial benefits.

If you don’t believe me, tally up all your receipts from ordering pizza, going through the drive through to get coffee, buying chips at the convenience store, and picking up stuff that with a little effort you could have made yourself (even if you are a culinary illiterate), and then do a little financial extrapolation with the power of compound interest (especially if you have credit card debt).

The kitchen deserves respect for what it already is and has the potential to be. We all belong here.

It’s kind of ironic. The kitchen is a classroom and a social stage. It can elevate, equalize and educate; expand one’s understanding about the mind and body and world. Don’t you think it’s kind of funny how much forward-thinking stuff happens here when this is the place where some backwards traditionalist thinks that the WOMEN SHOULD BE?

So you know what I say when people say I ought to be in the kitchen?

YOU ARE ABSOLUTELY RIGHT!